We've all seen them tootling down the street. If not in person, then in photos, memes, or movies.

Scooters are a fun way to travel.

But if you think scooters are something new, think again. 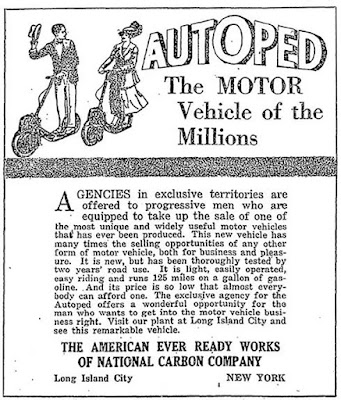 The original motorized scooter debuted in 1915, manufactured by the Autoped Company of Long Island City, in New York.

The driver stood on a platform with 10-inch tires to operate the machine. The scooters featured 10-inch tires and could be steered with handlebars attached to a long steering column. By pushing the handlebars forward, it engaged the clutch. A lever controlled the throttle. By pulling the handle bars back, it disengaged the clutch and applied the brake.

The steering column could be folded onto the platform to store with greater ease. An air-cooled, 4-stroke, 155 cc engine rested over the front wheel. The scooter came equipment with a headlamp and tail lamp, a horn, and a toolbox. Although an efficient way to travel, it was not widely distributed.
Advertised as "Step on and Go!" the scooter was like an enlarged child's scooter with an engine. It wsa the first mass-produced scooter in the US. Though some reports claimed it could reach 35 miles per hour, it was said to feel "unsteady" when pushed higher than 20 mph. 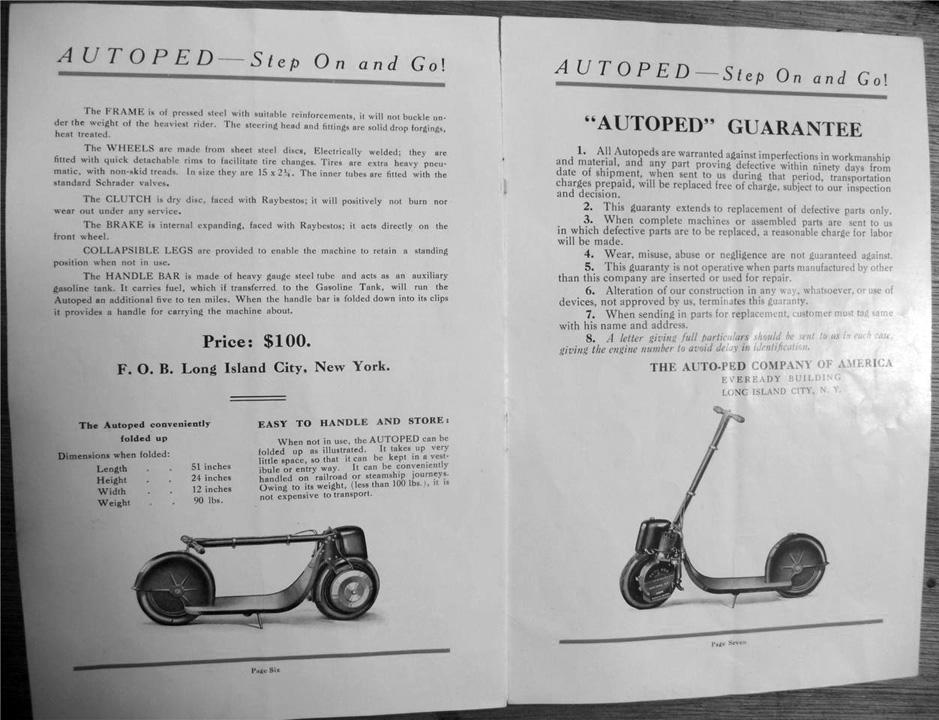 Later, Everready Batter Company purchased Autoped and added a battery-operated version.
“The Autoped is an ideal short distance conveyance for business or professional men or women to and from their places of business; for women to go shopping or calling; for physicians to make their regular daily calls or to answer hurry calls; for the older children to go about quickly for outing or school; for servants when they are sent on errands; for grocers, druggists and other merchants for quick delivery purposes; for commercial salesman to call on the trade; for employees to ride to and from work; for collectors; repairmen; messengers, and for anybody else who wants to save money, time and energy in going about. All will enjoy the comfort and pleasure of AUTOPEDING.” 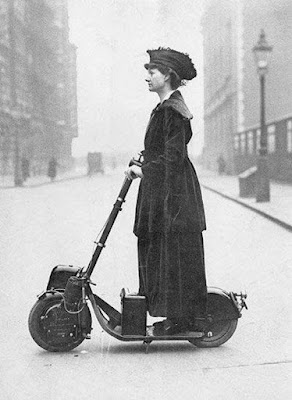 This photo appeared in The Retronaut and was captioned:

Lady Florence Norman, a suffragette, on her motor-scooter in 1916, travelling to work at offices in London where she was a supervisor. The scooter was a birthday present from her husband, the journalist and Liberal politician Sir Henry Norman.

Scooters weren't just for the working class, or nobles, but anyone who liked the idea of such an innovative, novel velocipede. 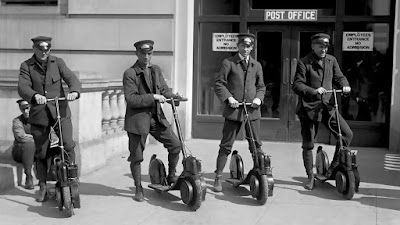 The U.S. Postal Service used the scooters for delivering mail. Police departments also utilized them.
Delinquents saw a means of escape on the slim machines, using them as getaway vehicles to speed down alleys while terrorizing the boroughs of Brooklyn, Queens, and Manhattan. The hoodlums were dubbed as the Long Island Bogtrotters.
However, the majority of those who purchased the machines used them recreational purposes. Oddly enough, a vast majority of the advertisements were geared toward women, just as the ads that created a buzz half a century later when Italian scooters were all the rage.
The Autoped might have been a bit ahead of its time, but it is such fun to see those old images and realize everything old is new once again.