Years ago, I was in a museum gift shop and picked up a little booklet that looked interesting. 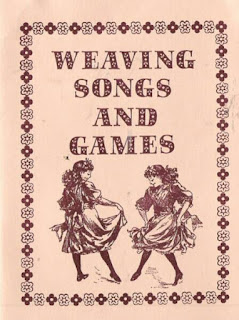 Weaving Song and Games features exactly what the title implies: games and songs children enjoyed at the end of the 1800s and beginning of the twentieth century.

The first known loom was developed by primitive man (or woman). Twisted root fibers were stretched between two trees with other fibers interlaced by hand. Later, a flat stick was used to weave under alternate threads and turned on its edge.

In colonial America, pioneers made looms of hand-hewn timbers. They wove the cloth they needed from flax and wool grown in their new country. The material was often dyed with roots, bark, and leaves.

Then, as industries grew to make cloth commercially, the need for a loom at home became something of the past, or a hobby.

But when people were weaving, they often sang songs. And children turned the songs into games. There were games in which the children formed the "thread" of the warp, while the child who was the "weaver" ran in and out among other children with a long ribbon. 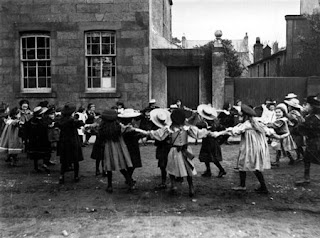 Another game, called "Weaver in the Middle" featured one child as the "weaver" who sits in the center of a circle. The other children stand around the weaver, singing:
Weaver in the middle,
Weaver go free,
Weaver in the middle,
Can't catch me.
The children tease the weaver by coming in close, tapping the weaver on the shoulder, or giving a light shove. If the weaver touches them, they take the weaver's place and the weaver joins the other children in the circle.
When I was working on my soon-to-release sweet historical romance collection of three stories set in 1884 Grass Valley, Oregon, it seemed like a perfect time to work one of the weaving songs into the story.
There is a fun scene where Birdie, the heroine from the second story in the collection, is at the school, showing the children how to play "Weaver in the Middle."
~*~

Two of the bigger boys crept closer and closer to Birdie as the students all sang the song. Birdie had tied a blue ribbon in her hair that morning. He’d noticed it at breakfast and how well it matched her eyes. Rance watched as one of the boys gave it a tug and pulled it from her hair, waving it like a prize. The other boy gave him a shove, and the two of them tripped over Birdie as she sat on the grass, knocking her backward.

He didn’t stop, didn’t think, just charged into the ring of children, swept Birdie into his arms, and marched away from the startled students.

“Do you want your ribbon back?” the boy who’d captured it shouted in question.

“You can keep it, Thomas,” she called over Rance’s shoulder, then waved to the group before turning her attention to Rance. “Might I inquire as to what you are doing?”

“I could ask the same. Birdie, you’re woman grown. Aren’t you a little old to join in the playground tomfoolery?”

She tipped her head and studied him. “Maybe some tomfoolery would do you good, Rance Barlow.” 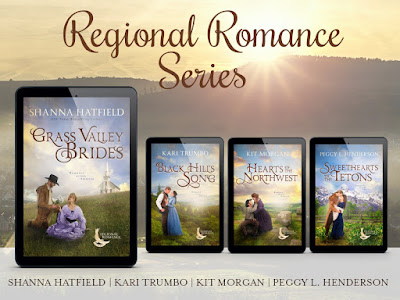 The Regional Romance Series written by Kari Trumbo, Kit Morgan, Peggy L. Henderson, and me, will all release September 14!

What's really neat about the series is that each book is a collection of three stories. If you buy all four books, you actually get twelve stories. 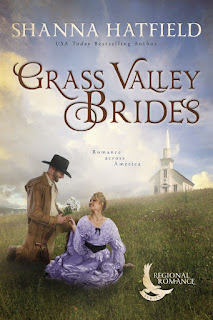 What’s a matchmaker to do when the husband-to-be rejects the bride?

Widowed as a young wife, Cara Cargill turned her head for business and love of romance into a successful mail-order bride enterprise. She’s never had a problem matching couples until one mule-headed man continues to refuse to wed the women she sends to meet him in Grass Valley, Oregon. In an effort to make a match he’ll keep and uphold her sterling reputation, Cara is desperate to find the perfect bride.

♥ Daisy – When her fiancé leaves her at the altar, Daisy Bancroft knows it is far past time for a change. Her dearest friend, Cara, offers to send her to a newly established town in Oregon, where possibilities abound and the grass is rumored to be as tall as a man’s head. Daisy arrives with plans to wed Tagg Thompson, only to find the obstinate rancher has foisted her off on his best friend.

♥ Birdie – Tired of waiting for her Mister Right to magically appear and whisk her away to a happily-ever-after, Bridget “Birdie” Byrne convinces her sister, a renowned matchmaker, to send her as the bride to Tagg Thompson. The man who greets her upon her arrival isn’t Tagg, but Birdie is certain she’s finally discovered the man she is meant to marry.

♥ Cara – Fed up with Tagg Thompson and his refusals of every bride she’s sent to Grass Valley for him to wed, Cara decides to meet the exasperating man in person. Her feet are barely on the ground in the rustic town before she’s nearly bowled over by a herd of stampeding cattle and swept into the brawny arms of a cowboy with the bluest eyes she’s ever seen.

Will true love find its home in the hearts of these Grass Valley Brides?

Get all four books in the Regional Romance Series featuring scenic historic locations, exciting drama, and sweet (yet swoony) romance!

Each book is available for pre-order for only $2.99 on Amazon.