Cholera On the Kansas Plains by Zina Abbott 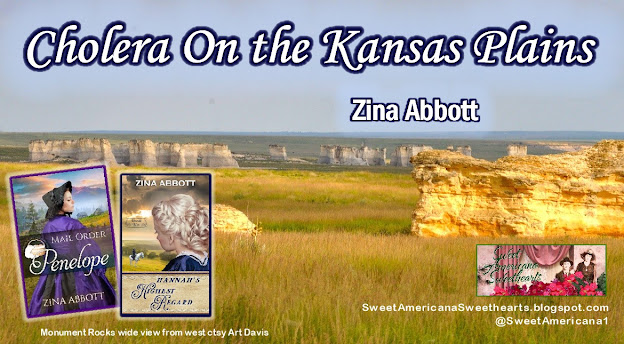 What is cholera and where did it come from?

Vibrio comma or Vibrio cholerae¸ the scientific name for cholera, probably began in India and spread around the world along trade routes.  Symptoms start with a stomach ache that grows to intense pain within minutes. The disease progresses rapidly, attacking the intestinal lining, producing severe diarrhea, vomiting, abdominal pain, and cramps.

Within hours the skin wrinkles and turns blue, which is why it was often called the blue death. With no cure or treatment for the disease, the infected person usually died within 24 hours or less.

It first appeared in America in the 1800s. Many western emigrants suffered from the dreaded disease.  Various indigenous tribes who came in contact with these newcomers suffered major losses to their population. It is estimated that the Cheyenne tribe alone lost a third of its people to the 1849 epidemic. Cholera rarely spread from person to person but through the contamination of water sources.

In 1832, it is believed immigrant ships destined for Canada carried the disease up the St. Lawrence River. From there, the cholera traveled down Lake Champlain and west by canal boat from Albany to Buffalo. Before long, it reached troopers at Jefferson Barracks outside St. Louis.
Wintering each year in the Deep South, in the spring the disease joined the emigrants heading west. Cholera made its way up the Missouri on riverboats. An outbreak on board the Yellowstone in July 1833 turned it into a floating death trap. One of the few survivors, Joseph La Barge, later recalled that just below Kansas City he buried eight victims in one grave. Fear of an epidemic caused Missouri residents in Jackson County to threaten to destroy the ship.

In the mid-1830s reports of cholera lessened. Then the disease reappeared during the Gold Rush of 1849. Historian George Groh wrote the "The gold rush was to cholera like wind to fire." St. Louis was struck in early 1849.  By the end of summer, estimates of dead ranged from 4,500 to 6,000. The number of trail deaths is difficult to determine, however, there are estimates as high as 5,000 in 1849 alone. 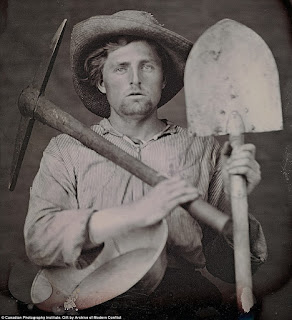 In 1850 the losses appear to have been greater. One Missouri newspaper estimated that along a stretch of the Overland Trail one person per mile died from the disease. Historian Merrill Mattes estimates the possibility of four graves per mile along the Platte River route.

The first time Cholera struck the Kansas area was in 1849.

Fort Leavenworth, the first fort built in Kansas in 1821, suffered a high incidence of the disease in 1849 and 1850. Used as a supply center and staging area for the west, cholera made it appearance more than once.


Then, in August of 1855, cholera struck the new Fort Riley. Established first in 1853 as Camp Center, it was in the process of having its first stone buildings constructed. Although the epidemic lasted only a few days, it left in its wake some 75-125 people dead. Included among the deceased was the Fort Riley commanding officer, Major E. A. Ogden.  That same year, Kansas City suffered a large epidemic. 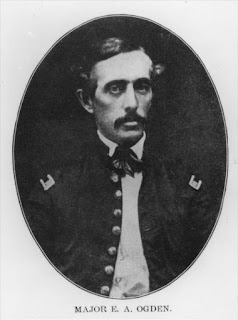 At that time, both of those forts were on the frontier. The government had barely opened the territory to settlement the year before, and most white Americans who moved there lived close to the Missouri and Kansas Rivers. Before that, the forts provided protection for the caravans that traveled the Santa Fe Trail.


For the next ten years, the plains remained relatively free of cholera. Then, in 1866 and 1867, it all changed.

Cholera reappeared on the military posts across the nation in 1866.

Fort Riley reported its first case of Asiatic cholera on August 30, 1866. In total, there were 59 cases and 27 deaths. Likewise, Fort Leavenworth reported 20 cases with its first fatality from the disease on September 18th. The cases were among recently-arrived persons.  These cases prompted a study presented in Circular No. 5. One suggestion was that, in the future, all infected troops should be quarantined.


Then in the summer of 1867, another cholera outbreak began in Kansas and spread west. Hard hit were the soldiers of the four companies of the 38th Infantry, also known as Buffalo Soldiers by the Native Americans, stationed at Fort Harker (formerly Fort Ellsworth).

It is believed that the disease carried over from the year before, becoming less active in cold weather and manifesting itself in host bodies as diarrhea. It probably never fully went away, but resurged as the weather warmed.

Some sources speculate that the disease probably arrived with these infantrymen who traveled to the fort from Jefferson Barracks in St. Louis, Missouri, where there was a cholera outbreak was also occurring.

Other sources believe it was the civilian population coming from Missouri and other states bordering the Mississippi and Missouri Rivers. The civilians tended to get sick before the soldiers at the forts, and they suffered the larger loses. Also, although there were increased incidences of diarrhea at Jefferson Barracks, the cholera outbreak there did not start until weeks after the soldiers from the 38th departed. Either way, the disease spread across the plains. It was particularly bad from the end of June through August, but cases appeared up to the end of the year.

The first case of cholera at Fort Harker was   diagnosed on June 28. The same day the disease appeared in the 38th infantry, an employee of a beef contractor developed a fatal case. For a few days the infection was confined to the troops camped about the post rather than in the garrison itself but the sickness soon spread to not only the post but the town of Ellsworth. Dr. George M. Sternberg of the post eventually reported 79 cases in his hospital with 29 deaths but he agreed that probably as many as 200 died at and in the vicinity of Fort Harker. Among the dead were Mrs. Sternberg and her cook who died a day apart.

The post surgeon’s records show that cholera hit Fort Hays rather hard, also. It was at the same time that the 38th Infantry and other regiments such as the 7th Cavalry had been deployed to the fort in response to increased conflicts with Plains Indians. It proved quite a challenge since a flood in June forced relocation of the fort. The decision was made to move the fort thirteen miles away so that it would be next to the railroad tracks. When the first case of cholera at Fort Hays appeared July 11, 1867, the post hospital had not yet been built. Soldiers and civilian patients were housed in tents. The epidemic lasted two months, killing 36 soldiers and approximately 150 civilians.


It is believed the greater number of cases at this fort was due to several factors. Because the fort had been forced to move due to severe flooding of the Smoky Hill River, it was not set up well. Disorganization led to unsanitary practices. Sinks were not properly dug or treated with lime, trash abounded, animal and human waste was allowed to flow into the same creeks used as water sources, and things were not kept clean. The greater than usual rain and flooding led to an increase of drowned animal carcasses and rotting plant matter. These unsanitary conditions were particularly true in the areas where the contract freight wagons camped, which led to many of their employees getting the disease. In those forts that enforced the stringent sanitary practices of the time including the use of disinfectant, the cholera was better controlled among the people who lived there.
Fort Larned experienced a mild cholera epidemic in the summer of 1867. It was brought to the fort by a company of the 38th infantry, on its way to New Mexico territory. The commander of the fort knew that the detachment carried the dreaded disease, but contrary to the request of the surgeon general he allowed the men to stop there. The first case broke out on July 6 and the victim died ten hours later. Two more cases occurred on the 10th and 11th; one died in six hours and the other recovered.

At Fort Dodge, there was a severe outbreak between July 21 and July 31, 1867. Forty-nine cases reported with twenty-four recovered or convalescing and 25 deaths.

Fewer in number, cases of cholera were reported at Forts Wallace and Zarah. Although in 1867 Fort Riley reported two cases contracted by contract employees of the quartermaster department, the post surgeon reported that none of the troops stationed at the fort contracted cholera that year.

It was equally devastating to civilian populations in the communities that had recently appeared in response to the railroad construction and cattle shipping in central Kansas. For example, the town of Ellsworth had a civilian population about 1,000 before the epidemic struck Fort Harker. People fled, leaving about forty left in town. The papers reported there were not enough people to prepare the dead or dig graves.

In my recently-published book, Mail Order Penelope, Marcus is a post surgeon from Ft. Larned who leaves the fort in the hands of his assistant while he travels to Fort Hays to help deal with the overwhelming outbreak there. Penelope has arranged to travel west as a mail order bride, but waits until October after the worst of the cholera epidemic has ended. You may find the book description and purchase link for this book by CLICKING HERE.

In my next book now on preorder, Hannah’s Highest Regard, it also takes place in Kansas. Jake is a quartermaster kept busy with providing supplies and livestock to his assigned fort to deal with the increase of soldiers and the demands of dealing with hostile Native Americans, primarily Cheyenne. He is also aware of the cholera epidemic. It adds to his frustration that he dare not try to visit Hannah in Salina until the disease has passed for fear of carrying it to her. You may find the book description and purchase link for that book by CLICKING HERE.