The old TV show where a celebrity panel asked questions to find the contestants job.
I am having fun in my latest series, Bridgette's Bridal Registry,  coming up with jobs for my ex-outlaws. Bridgette came up with her first scheme to entice young men to come in out of the badlands and life of crime and she would split their bounty with him. Plus, she is a lawyer and represents them so they can get a reduced sentence. When they've served their time, she gives them their half of the bounty and helps them in get a new job or business.

In the Bridal Registry series, she add a mail-order bride to the mix. After all, a man with a good woman is less likely to return to their outlaw ways. 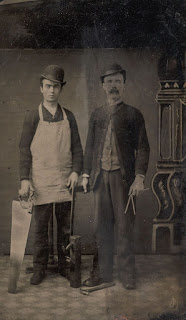 So far, I came up with a carpenter. You can see the the men with saws, hammer and square.  Anyway, Del is a successful carpenter who makes chairs and tables, and furniture.

Notice the hats these two are wearing. Derbys or bowlers were the most common hats worn in the west. The cowboy hat that we know didn't really take off until much later.

So, my latest ex-outlaw, is going to make hats. Bowlers, and Boss of the plains which were a wider rimmed hat, were the hats of choice.

They were made out of felt. Which is made from the undercoat fur of beavers and rabbits. Later wool and other furs were used. The soft undercoat is plucked and as the fir is stirred it binds together to form a mat.

The mat is then rolled and dunked in hot water where the felt is then placed over a form where the material takes the shape of the form. It can be dyed.

One of my other men runs a sawmill. Sawmills were essential to growing cities so that they could build with lumber and not just logs.

Another one of my young men became a land agent. They surveyed land, collected rents, and held land deeds and maps.

All my guys have had successful business so far.  And I have had fun trying to think what they could do back in the day.

Jobs have sure changed.

If you want, send me ideas of jobs you would like to see characters have in historical books.
If you enjoy puzzles - here is one of Book 1 in Puzzle Bridgette's Bridal Registry.