Covering Baby’s Bottom in the 1850s 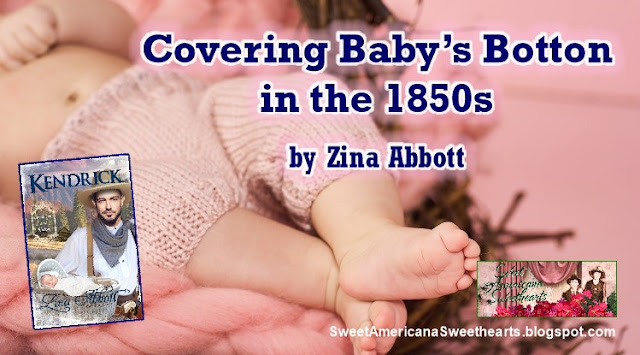 My latest book is set in 1854 Columbia, California. At that time, California had been United States territory for only six years and a state for only four years. However, the gold rush still continued in 1854, and women and children were there, even though they were in far smaller numbers than men.

So, what happens when a bachelor finds himself with a baby? What was available for him to care for that child? The reason Waggles the goat is part of the story is because canned milk was still several years away from being invented.

My other question was, how did folks at that time handle the diapering situation? Were safety pins invented? There were no disposable diapers or plastic diaper covers then, so how did parents keep the little darlings dry…or did they?

The information out on the internet is sketchy, but here is what I found. 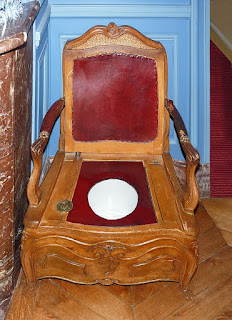 One of the most common responses to the difficulties of diapering has been to toilet train early. At the end of the seventeenth century John Locke recommended putting babies on a "pierced chair"–a chair with a hole in the bottom under which a chamber pot could be placed. Some of these chairs had a space for a hot brick to help keep infants warm for the time, sometimes considerable, in which they were strapped to the chair while their mothers waited for them to "produce."

Holding babies over bowls or a potty was popular. Throughout the nineteenth and early twentieth centuries, parenting manuals commonly recommended that toilet training begin almost immediately after birth. Some manuals promised mothers that diapers could be dispensed with altogether within three or four months.

By the early to mid-nineteenth century, English children (and we can assume their American counterparts) were not commonly swaddled but dressed in diapers, underpants, and long woolen dresses with swaddling bands only around their abdomens. Swaddling cloth of oiled silk was developed in the eighteenth century in an attempt to prevent leaks. 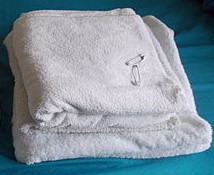 Fabric diapers came into wide use to replace swaddling. They were generally made of linen or cotton, perhaps muslin or flannel. They generally were square and folded to fit around the babies’ bottoms. The English called them nappies, but in the United States, even in the 1800s they were known as diapers. 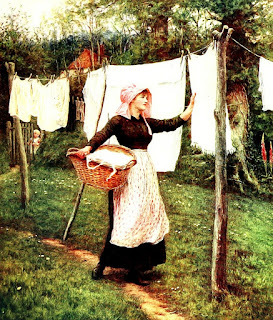 What about keeping those diapers clean? In the 1850s, the role of bacteria and how it grows was not understood. Wet diapers were often hung out to dry and then reused. If there was water readily available, they might have been rinsed first. Only the heavily soiled ones merited laundering, and they may have been merely scraped clean, rinsed, dried, and reused between washings with soap and water. 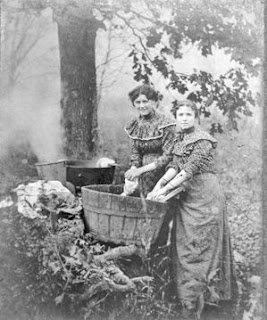 Before we get too critical and say “Oh, gross!” we need to remember many women back in the day did not have access to the conveniences we enjoy. Doing laundry was hard work. Often, especially for pioneer women traveling by wagon train, water was not easily available. For others, water was dipped from a river or creek, or an outdoor well. Not everyone had access to a pump either in the yard or in the house. Also, a woman may have been fortunate to live within a reasonable distance from a mercantile where she could buy soap, but many women still made their own soap. That required having rendered fat from butchered animals.

In 1850s Columbia, California, the availability of water was a serious issue. The town grew because of gold found in what was named Maine Gulch (the Hildreth party who discovered gold there came from the state of Maine.) This was a seasonal gulch created by snow runoff. By late June or July, the gulch was dry until the rains came later in the autumn. The nearest sources of water were the springs at Springfield about a mile away (owned by a Mexican woman who sold the water), Mormon Creek which had its headwaters at the spring, and another Creek which was five miles away. 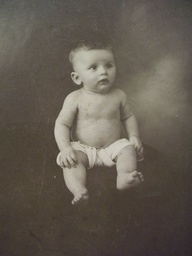 How did mothers keep those diapers on their little darlings? Sometimes the diapers had ties sewn on which were used the tie the fabric in place. Sometimes they were folded and tucked. (I imagine neither of these methods were foolproof for keeping a diaper on.)

Samuel Slocum is among those credited with developing and widely distributing the straight pin with a head so they stayed in place in cloth. These pins were used for decades even after the availability of safety pins. I wonder how often the little darlings got poked by the exposed end of a straight pin? Ouch!

A great advance in diapering was the invention of the safety pin, patented by Walter Hunt in 1849.
It did not widely used in place of the straight pin for securing diapers until the 1880s. (However, in my story set in 1854, the baby’s mother would have had the financial means and incentive to buy the latest and greatest for her sweet baby girl.) By the late 1800s, infants in Europe and North America were wearing garments similar to the modern cloth diaper. A square of linen or cotton flannel was folded into a triangular or rectangular shape and held in place by safety pins.

The diaper was sometimes covered with an absorbent pant called a "soaker" or "pilch," made of tightly knitted wool. In modern times, here has been a move back to using soakers made of wool fabric. The snugger style is made possible with the use of gripper snaps and Velcro—fastenings that were not invented until long after the 1850s.

Diaper rash in the nineteenth century was commonly remedied with burnt flour or powdered vegetable sulfur. 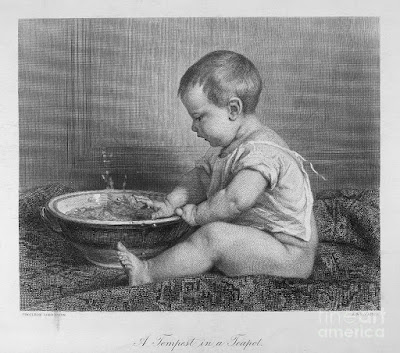 The truth of the matter is, mothers saved themselves a lot of laundry and diaper rash by often dressing their babies’ bottoms as shown above.

Kendrick is Book 9 in the popular Bachelors & Babies series. Kendrick, a Bachelor satisfied with being single, has his world turned upside-down the day the county sheriff shows up at his butcher shop with a baby and informs him that the deceased mother named him as the father. You may find the full book description and purchase link by CLICKING HERE.

Posted by Zina Abbott Author at 11:55 AM