From 1950 until 1957, the first seven years of my life, Texas experienced a devastating stretch of seven long years with severely deficient rainfall—thirty to fifty percent less than average.

With the drought came the second, third, and eighth-driest single years since the Weather Bureau began keeping records in 1888—1956, 1954, and 1951, respectively. drought 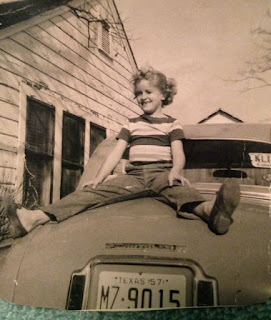 Now, it’s my personal opinion—since I lived through it—the event shouldn’t be counted as history. I find it hard to believe I’m historic!

However, for the purposes of writing historical novels, anything happening right up to the Vietnam war is included by the powers that be. Whoever they might be.

The loss of rain devastated the state’s economy and changed lives, especially in the rural areas where ranchers and farmers were so greatly affected.

Cattlemen sold off their stock or moved them north to Kansas as watering ponds, lakes, and rivers dried up and feed prices soared while that of beef dropped by two-thirds from fifteen cents a pound to only a nickel.

And of course, they’d overgrazed the pastures, encouraging the growth of the unwanted cedar and mesquite trees. Scorching winds carried the topsoil away, causing dust storms that rivaled those during the Great Dust Bowl.

Over a HUNDRED THOUSAND Texas ranchers went out of business and moved to town.

Farmers didn’t fare any better. In 1940, almost thirty percent of the population worked on a farm. That number fell to twelve percent by the 1960 census.

Harvests shriveled, showing great losses when in some areas the crop yield dropped as much as fifty percent. The unprecedented agriculture economic losses exceeded even the earlier Great Dust Bowl’s.

And towns didn’t go unaffected. Some thousand communities strictly enforced water restrictions with many going completely dry and forced to haul water in by truck or train.

Dallas, the hardest-hit large city, reservoirs got so low, they pumped water from the Red River that damaged pipes due to its high salt content.

The drought spurred Texas’ modern “water planning” era that prompted the creation of artificial lakes across the Lone Star State.

From 1950 through 1957, losses were estimated to be over twenty-two billion in 2011 dollars. Funny how little it affected me. All I remember of it is the flood that ended it when it rained and rained, and the rain almost came into our house. It flooded the halls of Letot Elementary in Dallas. 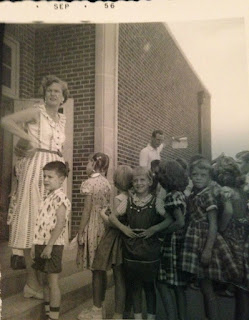 Mama didn’t know when she took me to school that day. I remember walking through the halls in about six inches of water, and one basement classroom had filled with water completely.

(No second-grade class was held that day and for a few to come after! This photo was when I was in the first grade at Letot.)

Temperatures soared over a blistering one hundred degrees for over eighty days straight in some areas. By 1956, ten states around Texas were also affected.

In the form of prophecy, this drought plays a part in one of my novels, SON OF PROMISE, the third ‘Companion Book’ to my Texas Romance Family Saga series, when God warns Travis Buckmeyer (third-generation from Henry in book one, VOW UNBROKEN) that it’s coming.

He sells off most of his cattle while the prices are still high and goes into the well-digging business. 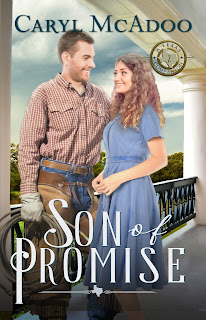 Here’s what one reviewer said about THE SON OF PROMISE:

“This story shows that the love of God within can overcome all obstacles. Your past does not determine your future.  Such a gentle story of faith, love, forgiveness, and yielding the sinful man to a higher power.” –Judy Schexnayder

I fell in love with Cody Buckmeyer, the 'secret-revealed' son of Travis from a one-night stand that happened even before he met Emma Lee Harris and married her (in CHIEF OF SINNERS, book ten of the Texas Romance Family Saga series).

It's a sweet coming of age story with horses, goats, and Great Pyrenees guardians! 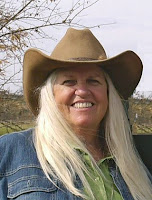 Bio: Caryl McAdoo prays her story brings God glory, and a quick scroll through her novels’ ratings by Christian readers attests to the Father’s faithfulness. She loves writing several genres (FORTY-EIGHT published and counting) almost as much as singing the new songs He gives her—look her up on YouTube to hear a few.

Her high school sweetheart husband won her heart fifty-one years ago, and now they share four children and eighteen grandsugars. Ron and Caryl live in the woods south of Clarksville, seat of Red River County in far Northeast Texas, waiting expectantly for God to open the next door.