What Were The Bounty Hunters Really Like in the Old West?

What Were The Bounty Hunters Really Like in the Old West?

Was there really true to life bounty hunters in the old west or was that something made up by those who wanted to sensationalize the west? The truth is there were real life bounty hunters that came in all shapes, sizes and genders in the west. During the time of the western frontier, a bounty might be paid for anyone or anything, not just outlaws. Indians and animals were also hunted for whatever reason.


At one time in the early days of the west, the Mexican government paid men to collect scalps. That included men, women and children. Of course, a man's scalp was worth far more than a woman's was.

Here's what is fascinating. Most bounties were collected by the lawmen or private detectives. Stagecoach, railroad and mining companies had their own men to confront those who stole from them.

For instance, the lawmen like US Marshalls and deputies only got paid for exspenses and were paid fees for certain services like arrests, to serve a warrant or collecting fines. So, they had to earn extra wages and did so by by collecting bounties, which gave them a decent or above average wage.

Then there is the local man who braves it up to try to capture a wanted criminal in their town. Many acted like judge, jury and executioner by gunning a man down. Some freelance bounty hunters never were able to capture their prey.

My series is a story of those hardened soldiers who were not looking for a place to call home but found it in Pistol Ridge.

The Pistol Ridge Box set is an old west historical western romance featuring the origins of Pistol Ridge that started with two books in the Proxy Bride series.
Pistol Ridge is a small remote mining town near Nevada City, Montana Territory, where a dirty sheriff had held the town hostage by ordering his thugs to steal a percentage of the business owner’s earnings to keep law and order. But, the women, holding a secret society, went looking for a hero. They found him in Abel Rosevelt and cleaned up the town with the help of seven men who fought in the war to help their former commander. These are their stories: 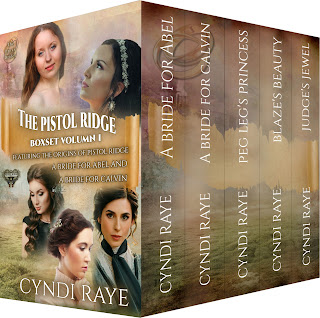