History of the Christmas Card! 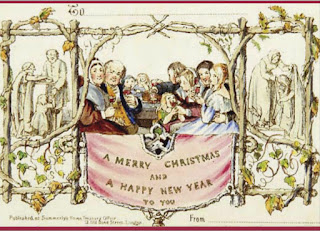 Hi, Kit Morgan here and today I want to talk about Christmas cards!
Did you know that the custom of sending Christmas cards was started in the UK? Yep, a gentleman by the name of Sir Henry Cole got the whole thing going back in 1843. He also happened to be a senior civil servant who helped set up a little thing called the "Public Record Office," what we now call the Post Office. He was an Assistant Record Keeper and got to thinking, "How can this be used by ordinary folk?"


So he got together with his good friend John 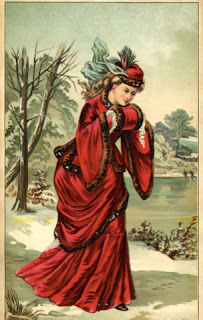 Horsley, an artist, and the two of them dreamed up the first Christmas card and sold them for a shilling each. That's about eight cents today. Not bad considering it was a three-paneled card. The outer panels had pictures of folks caring for the poor. The middle panel was a family enjoying a large Christmas dinner. Of course, not all were thrilled with the duo's card as the dinner Horsley created showed a child being given a glass of wine. That definitely wouldn't go over nowadays either!

By the time folks were flooding west here in America, the popularity of Christmas cards was in full swing. Some thought it was just a thing that would fall out of fashion and get dropped like a hot potato. But no, the Christmas card endured. In fact, by 1860 they replaced the ever-popular Happy New Year's card. Yes, that was a thing. Valentine cards were around back then too and soon fell out of fashion for the platonic groups and was reserved for romance. Thus, the Christmas card became the primary way to send a quick note to friends, family, and acquaintances. 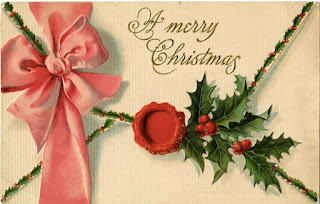 A man named Marcus Ward was the first stationer to really sink his teeth into the trend and brought in two designers to help him out. Walter Crane and Kate Greenway. In the 1860s and 1870s other elements of Christmas cards were the use of intricate botanicals with lettering in botanicals and other fancy artwork. Some even came in the form of eight-page booklets!
So now you can imagine a cowboy sending his mom a Christmas card during the holidays in some small town he and other cowboys might be wintering near. A card was perhaps more special back then than it is today.
Until next time!
Kit
Posted by Author Kit Morgan at 1:00 AM