The Civil War Lived On 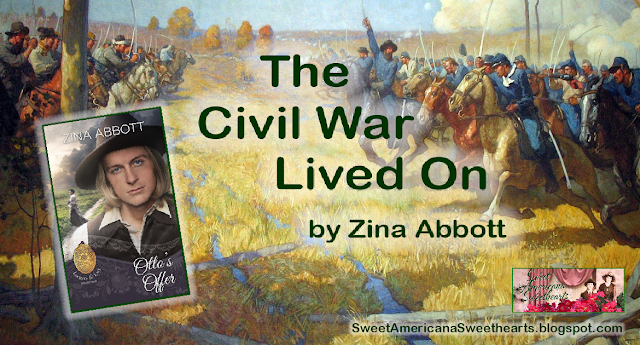 In my most recent book, Otto’s Offer, part of the Lockets & Lace series, several chapters include reference to Otto's service in the American Civil War while serving in the 16th Kansas Volunteer Cavalry. The chapter that actually tells of his wartime service and his experience on the Powder River Expedition of 1865 is based on regimental history of the actual 16th Kansas Volunteer Cavalry that was created on November 1, 1863. Although the initial enlistment period was three years, the entire regiment was mustered out December 6, 1865. What they were involved in during those slightly over two years I found interesting enough that I decided to include it in my book.
I was not the only author who wrote for the Lockets & Lace series whose story involved the Civil War in some manner. Starting with book 2 set in 1867 involving three sisters who are left to manage a farm by themselves due to their father and brother having been killed in the Civil War, all the way up to book 7 set in the late 1880’s, five of our books included the Civil War as a key element. It affected lives at the time the war took place, and continued to affect lives decades later.

Here’s a little background on my main character, Otto Atwell, and how his service did and did not accomplish what he desired as far as being a soldier. First, a snippet from my earlier book, Kizzie’s Kisses, where Otto is eighteen and still at home helping his father work their family farm.

The family had moved from Boonville, Missouri to Salina, Kansas, which in the 1850’s was on the edge of the wilderness. One motivation was to obtain prime farmland. Another was to escape the contention with some of their neighbors who were strong advocates of slavery. So, although Otto is of prime age for the Army in this 1862 scene, his parents have discouraged him from being involved with something that might pit him against some of their former neighbors.

In April of 1862, a band of about 40 hostile plains Indians attacked and killed several people on the western outskirts of Salina (a true historical event). The following scene takes place as Otto, with two of his two cousins, hides their best horses along the river to avoid them being stolen by the bushwhackers who invaded Salina in September of 1862 (another true historical event):

Jesse guessed at what Otto intended to tell them. “You going to join up to go fight in the war, Otto?”
“Sort of. I intend to join the militia. However, I don’t particularly want to go into battle back east. I certainly don’t want to join one of the regiments that are involved in the border wars between Kansas and Missouri. I’d hate to end up fighting against some of our old neighbors from Boonville. On the other hand, I can’t stop thinking about what the Indians did to all those people last spring. Now we have bushwhackers coming here to threaten us. Somebody has to do something to keep Kansas safe. I figure it’s up to me. I’m the right age. I know people look at me funny sometimes, wondering why I’m still at home helping Pa on the farm. I just have to find the right regiment, then I’m joining up.”

Otto’s father stalls him a year, but finally, at the end of 1863, Otto finds the right regiment—the 16th Kansas Volunteer Cavalry. He enlisted right away, but found himself in “hurry up and wait” mode as those forming the unit struggled to find enough volunteers to fill a regiment. The regiment trained and served post and escort duty at Fort Leavenworth until General Sterling Price of the Confederacy made a bid to conquer the state of Missouri for the South. At that point, the 16th Kansas Cavalry found themselves on the battlefields of the Second Battle of Lexington, Battle of Little Blue River and the Second Battle of Newtonia—marching within a few miles of Otto’s childhood home.

The involved regiments and companies pushed General Price and his troops south, passing through the southeast corner of Kansas and into Arkansas where the 16th Kansas Cavalry stayed until almost the end of the Civil War.

Those in the regiment who anticipated being mustered out within a couple of months after the end of the war were soon disappointed. All while the Civil War had been going on, the hostilities between whites and the native tribes had not ceased. Some headway had been made by some Army leaders to persuade several tribes like the Cheyenne, Sioux and Arapaho to accept reservation land north and south of of the Kansas-Colorado corridor leading to the gold fields of Colorado (between the Arkansas and Platte Rivers). However, that was disrupted due to the Sand Creek Massacre which took place late November, 1864.

What little progress had been made to peacefully move the tribes away to reservation land was practically destroyed, and surviving warriors, especially the Cheyenne and Lakota dog soldiers who never agreed to peace terms in the first place, made several attacks against white settlements and settlers.

In response, as soon as the Civil War appeared to about be over, orders were given to Brigadier General Patrick E. Connor to conduct a punitive campaign into the Powder River region against the Cheyenne, Arapaho and Sioux. It was all right if some Indian-hating general like General Chivington from Colorado to slaughter a group of Indians who had already agreed to peace terms and were supposedly under the protection of Fort Lyon. However, it was not all right for the aggrieved, whose demands for justice were ignored, to retaliate.

Thus, in my book, we find my character, Otto Atwell, who desired to join a Kansas military unit in order to help protect Kansas homesteaders living on land granted them by the U.S. Government from attacks by hostile Indians, being ordered to the land set aside for the tribal people in order to attack them there. He was less than happy about that, especially after having become acquainted with his cousin’s half-Kaw brother-in-law who had a different perspective of the government’s dealings with the tribes in order to acquire land for the whites moving west.

The Army reports cite the Powder River Expedition as a success, although history had shown it was far less than such. From comments made by George Bent, the son of a white trader and his Cheyenne wife, the only reason the tribes did not attack more or manage to drive the white soldiers away was because their few weapons were antiquated and no match for the Spencer repeating rifles used by the whites.

Beyond that, nothing substantial was achieved by the men who suffered hardship and starvation. Many of their horses and mules died in the harsh terrain. Fort Collins, named after the leader of the expedition was established. Gen. Collins determined most of the soldiers who arrived at the fort were unfit for further service and sent them to Fort Laramie to be mustered out. Although their fitness was no better than the men of the other units, the soldiers in the 16th Kansas Volunteer Cavalry were kept on duty to man the fort. However, by December 6, 1865, they also were sent to Fort Laramie where they were mustered out of service.

The name for Fort Collins was later changed to Fort Reno. Fort Reno was finally abandoned in 1868 after the Treaty of Fort Laramie ended Red Cloud’s War. Shortly afterwards, the tribes burned the fort to the ground.

This is a brief summary of events used in some of the back story in Otto’s Offer.

As for my character, Otto Atwell, his service in the Civil War will continue to affect him for the rest of his life—not so much due to the Civil War battles themselves, although they play their role in his bouts of post-traumatic stress disorder, but because he was among the unfortunate few who was wounded during the Powder River Expedition by one of those antiquated muskets the Cheyenne used. He is frequently in pain and has a limp as a result. Here is a snippet of part of Otto’s response to his younger brother seeking an affirmation about the glory of battle:

After the two settled around the still-warm stove in the kitchen after supper, Henry turned to Otto, his face full of anticipation. “I can hardly wait to hear this, Otto. I bet it was right exciting, being able to go after a bunch of Indians to put them in their place after what they did to us white people, wasn’t it?”
Otto shook his head, his eyes staring at the stovepipe without seeing it. “No, it wasn’t. I’ve never been through anything so miserable in my life. I suppose I learned a lot, but I’d never want to do it again.”
Henry’s expression fell. He hadn’t expected that answer. “But…the only reason it was miserable was because you got shot, wasn’t it? I can see where that could have turned you sour.”
“No. Even before that, it was a bad situation.”

For many who lived and fought during the American Civil War and dealt with the aftermath, “It was a bad situation” pretty much sums up how it affected lives for years to come.

Zina Abbott is the author of Kizzie’s Kisses from the Grandma’s Wedding Quilts series (on sale this week only for $.99), as well as The Bavarian Jeweler and Otto’s Offer from the Lockets & Lace series, both offered by authors who blog now or in the past on the Sweet Americana Sweethearts blog. Please click on the hyperlink for each book title to learn more about each book, or visit Zina Abbott’s Amazon Author Page.
Posted by Zina Abbott Author at 1:06 PM