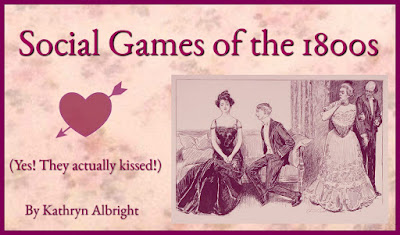 My household is a family of "gamers." Over the years, snow-days and holidays and birthday parties, whenever we were all together, we would usually have a game of some sorts going.

What would they had been playing if we had all lived in the 1800’s? Some of the social games from then survived into my childhood, such as Blind Man’s Buff and Twenty Questions and Musical Chairs. But no matter the year or century, games have always provided a way for people to have fun, "let down their hair" a little, laugh, interact socially, flirt, and enjoy socially approved physical contact. It was mostly the upper and middle class that enjoyed them. 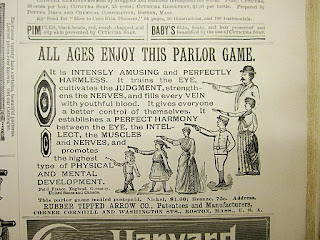 Something to remember about the spirit of the social games of the 1800s involving boys and girls, men and women, is that an overly competitive attitude was considered “poor form.” The idea was to have fun together and not to “out-do” another player to the point that feelings were hurt. Camaraderie, a relaxing of inhibitions, and laughing at one’s self were the important aspect of social games. 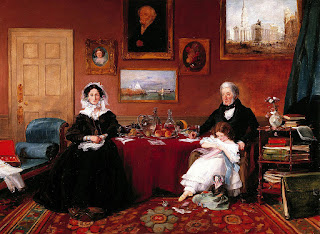 Puss, Puss in the Corner

For the game, all that you need is a fairly square room with four corners and the furniture moved out of the way. If played outside, you need something to denote the four corners such as bean bags or chairs. I suppose a baseball diamond could be used, but such a large area would make for a very energetic game. The game requires five or more players. One stands in the center of the square, while the others stand in each corner. The central player calls out: “Puss, puss in the corner!” On the word “corner” everyone moves to a different corner. Since there are five players, one will always be left out and that one becomes the new “Puss.” If more players are involved, the one left out of a corner goes to the end of a line of the others waiting to play, and the first in that line becomes the new “Puss.” Sometimes when this game was played, a “forfeit” was demanded of the one who became the new Puss.

In this game, everyone sits in a large circle (with or without chairs depending on the age of participants.) Each player is assigned either a number, an animals name, or a flower’s name. The starter goes to the center of the circle and spins a plate on its edge (wooden or some other unbreakable plate or disc.) He calls out a number or one of the names and dashes to his seat. The person being called out, must jump up and rush to the plate to spin it again and call out another player. The play continues until someone is not quick enough and the plate falls. That player, then must pay a forfeit.

The Key of the King’s Garden 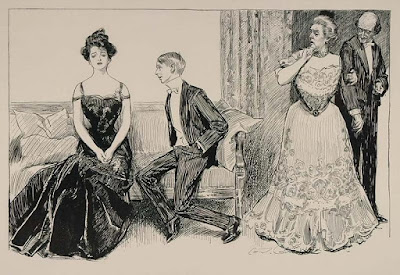 These games were played for fun with a light-hearted attitude. Keeping score (numerically) wasn’t done. However, there was such a thing as “forfeits” which added tremendously to the fun.

Forfeits occurred when someone made a mistake, lost their chance to a seat or space in the game, or lost in some way. That player would write their name on a piece of paper, which would then be placed in a bowl or basket. At the end of the game (or the evening,) a judge would be chosen. A second player would select a paper from the bowl and announce: “I have a forfeit to be redeemed.” The judge would ask whether it belonged to a lady or a gentleman. Upon learning which it was, he would then assign a task for the person to perform (not knowing the actual person’s identity.)

The Statue
The “forfeiter” is posed by a selected number of other players, usually in ridiculous positions.

Bow to the Prettiest, Kneel to the Wittiest,
and Kiss the One You Love Best
This is reserved for a man.
(Hopefully he will do all three tasks with the same lady!)

The Nun’s Kiss
A lady kisses a man chosen by the judge,
performing the kiss through the bars of a chair.

The Counsel
The person must give a piece of advice to all (or just one) players. (Always done in the spirit of fun and good humor.)

The Will
The person leaves to each other player an item or a quality he thinks he possesses. (Also done in the spirit of fun and good humor.)

Kiss the One You Love without Revealing Who It Is
The individual must kiss all the players of opposite gender, without letting on which player is the one he or she loves.

There are many others – as varied as the imagination of the judge!

With teenagers constantly watching their phones
rather than communicating face to face,
I can’t help but think that these would be fun to bring back!

Who is with me?


What is a favorite social game of yours? 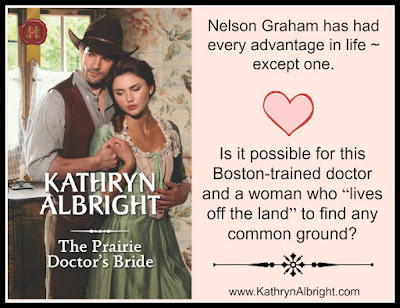 "This book was a pure delight."
The Prairie Doctor's Bride/San Francisco Review of Books

Check out my newest "sweet" release!