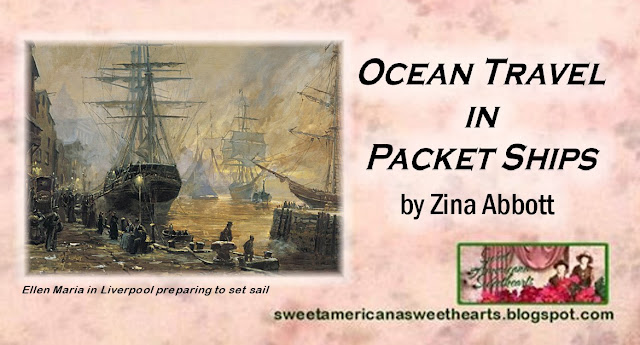 The Sweet Americana Sweethearts blog is about historical North Americans. However, there is no getting away from the fact that before many people became North Americans, they first traveling here from somewhere else. In much of the 19th century, much of that travel from different nations took place on packet ships.

Packet ships were regularly-scheduled transport ships designed to carry mail, cargo, and people. Although there were some first and second-class private and semi-private rooms on the first deck below the top deck, most passengers crossed the ocean in the steerage area on the second deck down. Regardless of whether passengers were wealthy or impoverished, over the six to eight weeks of their voyage they all tended to suffer from boredom or anxiety that the ship may founder in bad weather and sink.

Ships were built to have a top deck where the seamen operated the ship and, in good weather, passengers could walk and spend time in the sun. Often on the first level down were the private and semi-private rooms, and rooms to provide services for those passengers and the crew. The second level down was the steerage. Air flow needed to make it way through the hatches and down the stairwells. Below steerage was the hold where cargo was transported. Below that was the bilge.

Most packet ships had ten to twenty private and semi-private cabins on the deck just below the top deck available for those customers in a position to pay a higher fare. The sleeping areas were behind closed doors with slats for ventilation. Down the center of a double row of rooms was a common area known as the saloon (definition: A room or place for general use for a specific purpose: a dining saloon on a ship). It appeared to have top ventilation and access to natural light. 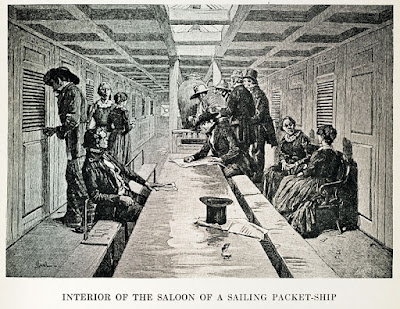 Passengers could spend much of their voyage in the common saloon area reading, conversing or socializing with other passengers. It was where they took their meals. They were another level up from steerage.

Steerage passengers slept, ate, and socialized in the same spaces. They brought their own bedding. Although food was provided, passengers had to cook it themselves. On rough crossings, steerage passengers often had little time in the fresh air on the upper deck.

Accommodations were tight. Beds were stacked at least two high, and passengers were often expected to sleep three to five to a bed that was not as large as today's double-size mattresses.

Conditions varied from ship to ship, but steerage was normally crowded, dark, and damp. Limited sanitation and stormy seas often combined to make it dirty and foul-smelling, too. Rats, insects, and disease were common problems.

From Liverpool each passenger receives weekly 5 lbs. of oatmeal, 2 1/2 lbs. biscuit, 1 lb. flour, 2 lbs. rice, 1/2 lb. sugar, 1/2 lb. molasses, and 2 ounces of tea. He is obliged to cook it the best way he can in a cook shop 12 feet by 6! This is the cause of so many quarrels and...many a poor woman with her children can get but one meal done, and sometimes they get nothing warm for days and nights when a gale of wind is blowing and the sea is mountains high and breaking over the ship in all directions.
—Anonymous, New-York Daily Times, October 15, 1851

My English Jonathan and Sarah Cousins Brown ancestors joined the Church of Jesus Christ of Latter-day Saints (Mormon) in 1852 and emigrated to the United States in 1853 for religious reasons. In the early 1850’s, migration by wagon train to the Salt Lake Valley followed the Mormon Train, which is almost the same as the Oregon Trail. Overland travel began either in eastern or western Iowa or eastern Nebraska.

Many immigrants from Europe bound for California, Oregon or Utah sailed into New Orleans, a popular port of entry at that time. They then took a steamboat up the Mississippi River to one of the departure points. As steerage passengers, many of their experiences were similar to some of my characters in the Lockets & Lace series prequel I am writing titled The Bavarian Jeweler.

Excerpts from “The Life Stories of the Early Latter-day Saints: Jonathan Brown and Family" by Cassandra Nielsen:

“…By January 1853, Jonathan and the family travelled to Liverpool to settle their voyage to the United States, but not without opposition from other family members....
“The Browns were driven by their belief in God and felt the need to move to Utah, causing them to sacrifice what they had in England including citizenship, business, friends, family, and comforts. Aside from their faith, they likely harbored anxieties in taking such a tremendous step.
“Firstly, a lot could happen during the long and sometimes treacherous journey. Also, Jonathan had a pregnant wife and seven young children whose safety and well-being were in the hands of father not turning his back on the family’s decision to travel.
“They would remain in Liverpool longer than they anticipated. According to the ship Register for the Ellen Maria, she was scheduled to sail on January 11, 1853. Departing this time of year was imperative because the saints had to cross the plains prior to the “the snows of early winter [that] blocked the highlands of Wyoming.” The voyage was delayed from unfinished preparations and prevailing westerlies.” 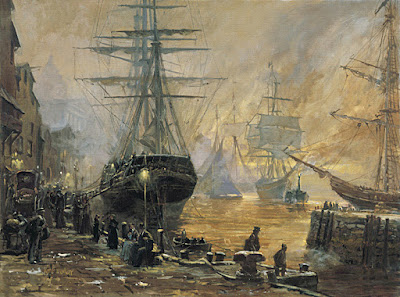 “Embarkation of the Saints at Liverpool, ” a painting by Ken Baxter.
The above painting shows the ship “Ellen Maria,” the ship upon which my Brown ancestors sailed to the United States, as it prepares to sail from Liverpool, England, for America on February 1, 1851. A replica hangs on the wall at the Family History Library in Salt Lake City (British floor).

“We staid in L’pool in lodgings until the 18th as the other ship did not set sail until the 18th instead of the 11th.  It was expensive lodging, it was 5/6 per night for my own family besides board.  Well on we sail, we set sail the 2nd day near everyone on board was helpless and sick.  I was the only one in our company that could render any assistance which I did night & day, I do not think I slept in bed 6 nights out of 6 weeks.  I laid me down on the boxes in front of the beds ready if any assistance was wanted.  Well, on the whole I think we had a very good voyage considering the time & number of miles.  We were tossed about a good deal, sometimes from side to side and our boxes would fly about before we nailed them down to the bottom at last.  We arrived at New Orleans in a steamer, Paid about 11/6 per head with the $100 of luggage including beds, provisions and everything.”

“Throughout the trip, the saints met with challenges common to a sea voyage. Jonathan took part in these difficulties as the one helping and the one suffering. In his own words from one account, Jonathan described his role as helper:

“With a sick wife, a sick nurse, 7 sick children, besides the others of the company I cared for, I do think I slept in a bed 6 nights out of the 6 weeks were on board. I laid down on the boxes in front of the beds, ready if any assistance was needed.” 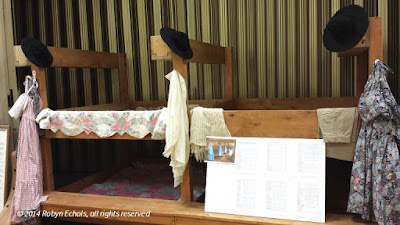 This photo was taken of a scale model of the beds in steerage on the
Ship Brooklyn which sailed from New York in 1846 bound for San Francisco. Cozy....


“Jonathan also took his turn at suffering difficulties while on board. One time, he almost broke both legs after falling against a ladder. After some time, he sprained a shoulder and “cut his forehead in three places.” He later scalded his arm when the tilting of the ship caused boiling arrowroot to spill. How did he pull through these afflictions? In his own words, Jonathan said:

“Well, my shoulder, legs, head, and arm all got well by the healing ordinances of the Church and I did not lay by one hour with it all. Thanks to the Lord.”

[another passenger's recollection] “The Ellen Maria arrived in New Orleans in the wee hours of the morning on March 7. A beautiful morning and when we went on deck…the view of New Orleans…appeared strange.
“However, as strange as the sight would be, many Saints were glad to be on solid ground again. Elated with the successful termination of the voyage to this place they soon crowded on the levee, and made their way into the city, in the hope of finding something more tempting to the palate than the ship fare.” The Saints were cautioned “in the use of fresh meat and vegetables…[and] to beware of swindlers.
“Many Saints were careful in their dealings though. While there, members residing in the port city would entertain incoming Saints with dinner, tea, and singing. Others would amble “through the quaint, old-fashioned city,” passing “many a familiar face” from the ship. Many would dine on the Louisianan French cuisine, there being “several cafes and restaurants” run by the French.”

In Lockets & Lace series prequel I will soon publish, you will find out:

(1)  Why the main characters of my story left Europe to make their homes in America.
(2)  Why the Irish family’s sailing experience was probably similar to that of my English ancestors.
(3)  Why my main characters chose to sail into New Orleans rather than into New York.


“The Life Stories of the Early Latter-day Saints: Jonathan Brown and Family" by Cassandra Nielsen


Some authors who post with the Sweet Americana Sweethearts blog
have joined together to bring you another multi-author series,
LOCKETS & LACE


To keep up with the latest LOCKETS & LACE series news, and to learn how to have a chance at some great prizes, be sure to "LIKE" our Facebook page for Lockets & Lace 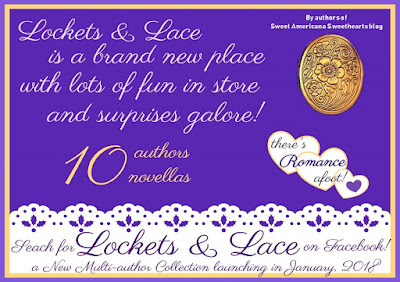 Have you read my novel, Kizzie's Kisses, published as part of last year's Sweet Americana Sweethearts group series, Grandma's Wedding Quilts? If not, I invite you to do so. You may find the purchase link by CLICKING HERE.

Kizzie's cousin, Otto Atwell, will be featured in my novel in the Lockets & Lace series. In fact, Kizzie's Kisses and Otto's story will be joined as part of my new ATWELL KIN series.