Dixie Land: A Song of the South?

The song “Dixie Land” has often come under attack, especially in recent times. It’s usually considered a song that divides the races and the north from the south. Surprisingly, however, the song did not originate in the south.

And perhaps the term Dixie, within this context, does not refer to the southern states at all. Actually, the origin of the word Dixie is in dispute. Many believe it derives from Dixon of the Mason-Dixon line fame. Because of a border dispute between Maryland, Pennsylvania, and Delaware, Charles Mason and Jeremiah Dixon surveyed the area between 1763 and 1767 and thus divided northern and southern states. This purported origin of Dixie is questioned by some who point to the fact that those north of the line are not referred to as Masons.

Another theory is that the term Dixie comes from the word Dix once printed on ten-dollar notes in New Orleans. Dixie appears to have referred to that area and then spread to include all of the south.

And still others claim the “Dixie” of the song refers not to the south at all, but to the John Dixie farm once located at Long Island, New York.

Whatever the origin of the term Dixie, Dan Emmett, of Mount Vernon, Ohio, is credited with the song’s authorship.

Over 37 others claim to have written the song, and some appear to have validity, such as the claim made on behalf of Thomas Snowden. The Snowdens were an African-American musical family. The grandparents of Thomas Snowden owned a neighboring farm to the Emmetts, and although evidence remains circumstantial, local lore claims Thomas Snowden taught the song to Dan Emmett. (see Snowden Family Band)

The first performance by Dan Emmett was on April 4, 1859 in a minstrel show at Mechanic’s Hall on Broadway. The song’s popularity soon grew, in the north as well as the south.

However, on February 18, 1861, less than two years after its first performance, it became forever interwoven into the Rebel cause. At Jefferson Davis’s inauguration in Montgomery, Alabama, musicians played “Dixie,” and it inspired Confederate armies, becoming their battle song and unofficial National Anthem.

After General Lee’s surrender at Appomattox, Lincoln requested the band to play the song, declaring it “one of the best tunes I ever heard.” Some view Lincoln’s request as a wish to reunite the nation.

And in view of that, a united nation, let’s notice the extra stanzas, copyrighted in 1917, “The U.S.A. Forever” by Angus S. Hibbard. 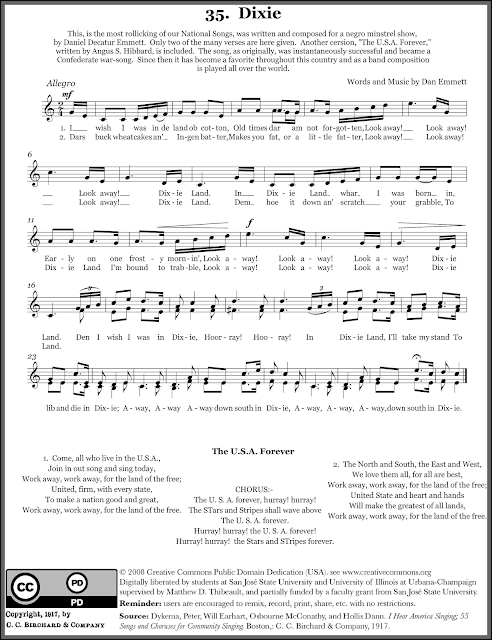 It’s ironic that the song, perhaps written by an African-American, Thomas Snowden, in the northern state of Ohio, and perhaps referring to a farm in New York, later became strongly associated with the Confederacy.

May we, as a nation, never let a song divide us when we can add the stanzas to unite us.

Hurray! Hurray! The U.S.A. forever!
May we forever stand!

*Information gathered from
Encyclopedia of Alabama,
Michael F. Edwards (Historical News of Alabama),
and Dixie, Wikipedia page
Posted by Sheila Hollinghead at 4:00 AM