The Life of ONE Madam in The Arizona Territory

“Belgian Jennie” Bauters ran a brothel in the young mining town of Jerome. Though she was a successful immigrant entrepreneur, her life as an Old West madam was far from pretty. 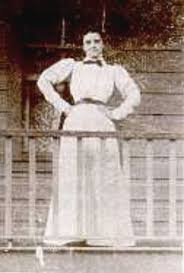 Our ideas of the West are colored by myth. The fast draw. The brave cowboy. The kind and generous madam.

“Belgian Jennie” Bauters was a madam in Jerome. She arrived on the scene when the mining town was young, all tents and shacks and saloons scattered on the hillside. She had a knack for business, buying property, running a brothel, and rebuilding after a series of three fires that struck the mining community between Christmas Eve 1897 and May 1899 and it is said that tents made do for shelters until a new brothel could open. Bauters finally rebuilt with brick facing Hull Road since brothels were not allowed on Main. Jennie's place had 20 rooms. Bauters became known as one of the wealthiest woman in the Arizona Territory with property from Main to Hull Avenue and with a bar and hourly accommodations later in Gold Road. 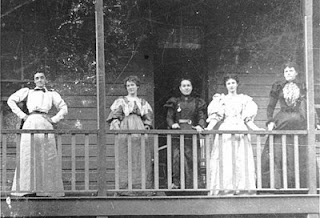 Little is known about her past. She was born in Belgium. She had a son. She enrolled him in a Catholic school in Chicago and visited from time to time, according to an article by Melanie Sturgeon in The Journal of Arizona History. “Like many other legendary western madams, she was supposedly a generous person, tenderhearted toward down-and-out miners and prospectors,” Sturgeon wrote. The reality is that she was probably more complex.

Prostitutes and madams were generally tolerated, not celebrated, and lived at the edge of society. One reason they were tolerated is that their businesses were taxed. It is a myth that they eventually married well and left their profession behind, Sturgeon writes. Romantic stories about "big-hearted dance hall girls ... trivialize these women's experiences."

"Belgian" Jennie Bauter was a madam of enduring notoriety and love in Jerome and later in Gold Road, another mining hotspot southwest of Kingman in the last century. Jerome would later abolish prostitution in the moderation of the mining town.

Now, 100 years later, "Jennie's Place," the Jerome hotel and one-time "cribs," where she built her fame and fortune in Jerome, has a new lease on life. A new madam is now running the house, but Mary Wills peddles kaleidoscopes, not flesh. Still, she has also kept intact the history of what has became known as the Sullivan Hotel and given it a new backbone to support its four floors into the future.

But after Jennie was killed, an agent sold the Jerome land to John Sullivan in 1907. The new owner expanded the cribs with a second floor, and built out a hotel to Main Street with a total of 60 rooms. The building remained in the Sullivan family through son Jerry and grandson Leo. But Leo had the cribs torn down in 1971 and 1972 as unsafe. "He was not one who was preservation minded," mused Mary Wills. 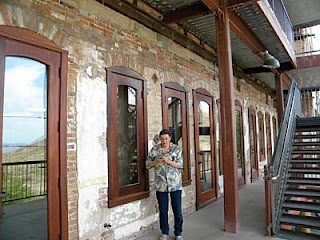 The building passed through another ownership in 1986 before being purchased by Mary Wills and Sally Dryer. When Mary and Sally realized their purchase could crumble to earth, they looked at restoring the grand hotel. But the endeavor was to be a monumental undertaking that would drag on for years. It called for architects, engineering and lots of expense. Just this past week, the external structure was finally completed and awaits paint. Then the effort will move inside.

If fire sprinklers are required, there could be more delays. The story goes back to late 2007, when an oversized check was presented to the preservationists from a State Heritage Fund grant to save the historic building. The money passed through the town of Jerome. But that joyous mood didn't last, because the state began the first of its many "sweeps" of State Parks Heritage Funds (in this case) to save the state general fund from the economic collapse as the recession began to sink in. Mary says they learned their grant had been cancelled just after they had issued a contract for the purchase of a ton of steel for $98,000. Today, that steel stands four floors tall to support the building. They had earlier been holding the building in place with steel cables. Eventually, the money was restored. Then it was taken away again before it finally was restored again just over a year ago. 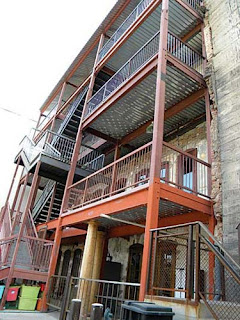 "We have borrowed from friends, everyone we can think of ... even employees," Mary says. No one is saying the building is finished. There is still plenty to do. The interior of the basement floor is likely to one day provide room for a spacious shop with all those windows that gaze out across the Verde Valley to the San Francisco Peaks.

But, what happened to Jennie?
The story goes, according to the Museum of History and Art in Kingman, in 1903, Bauters moved to a new location, about 23 miles from Kingman, called the Acme Gold Mine, now known as Gold Road. While there, she took up with a man named C.C. Leigh. It is possible they began their relationship in Jerome.

After a time, Jennie began to feel he was a threat. In September 1905, Leigh needed money to settle a bad debt. With anger and a gun in his hand, he headed to Jennie's place and demanded she hand over her cash. An argument ensued and Jennie tried to flee from the building. He chased after her, firing several shots, which wounded her as she ran into the street.

“Several people heard her express her fear of Leigh, but either did not listen or did not care. Witnesses heard her screams, watched Leigh chase her with a revolver, but did not help. After he shot her the first time and they heard her pleading with him, … no one came to her rescue. Leigh had time to walk back to the saloon, reload his gun, return to the spot where Jennie was lying and shoot her one final time.” He approached the paralyzed woman and fired a fatal shot to her head. He then pointed the gun to his chest and fired again. He lay down beside her to die.

But, instead, Leigh survived the suicide attempt and was carted off to jail. Jennie was mourned by all and laid to rest in the Pioneer Cemetery in Kingman. In 1907, justice was served and Leigh was hanged. He too, was buried in the Kingman Pioneer Cemetery.

“These accounts reveal the stark loneliness and isolation that characterized Jennie’s vocation,” Sturgeon writes. This was not a glamorous life.

But even death wasn't easy for Jennie. Beginning in 1917, the Pioneer Cemetery was moved to make way for a school building. Relatives had to pay a substantial fee (in those days) to move the remains. According to the story, when school children began to dig up bones, an urgent effort was made to remove the last of the remains and place them in a mass grave. For some, it is just not easy. 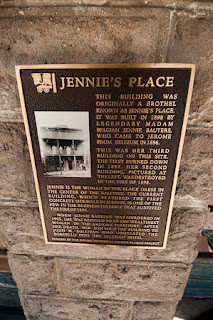 Most folks who live in Arizona have probably been to Jerome.  It is an amazing place to visit!  It's full of history, artists, restaurants, bars, and shops galore!  For those who have not been there and if you ever have a chance - Don't Miss It!!!

I'm very excited that my next book, Chase's Story, takes place in Arizona.  It's a state full of history AND I happen to live here.  I write all genres from little one's picture books, to time travel adventures for the middle grade kiddos, to romances for adults.  My favorite, at this point, is writing the historical western romance.

Find out more about my books and/or me at the following links.....

I have a newsletter that goes out for new releases or sales.  If you would like to be notified, please sign up @ http://eepurl.com/388Xr
Posted by Penny's Tales at 8:15 AM