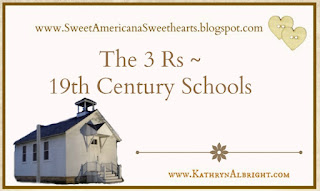 Prior to the Civil War, schoolteachers were mostly men because the prevailing belief was that women could not maintain discipline in the classroom. When the men left for the war, women moved in and filled positions at 60% less salary. When the men returned, they refused to work at the reduced wages even through they did make more than the women teachers, and most left the profession.

Women teachers were required to be single. They could "sit" for their teaching certificate as long as they had graduated from school. Some were as young as fifteen. If they married, they had to give up their job. They were not allowed to attend public performances or dances. Male teachers were permitted to date one night a week or two if they attended church regularly. Because women were so few in number compared to men in the West, the turn-over rate for teachers was fairly high as women married and started their own families. 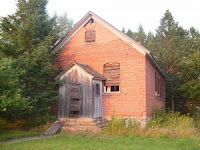 Children from the age of five would go to school daily through the week and then on weekends would be expected to come back and help clean the schoolhouse. A teacher might have anywhere from three to forty-five students in the first the first through the eighth grade. Usually girls would sit on one side of the room and boys on the other, with an aisle down the middle.

Discipline could be difficult at times, especially when some of the older boys towered over the teacher. Infractions were dealt with swiftly and often severely. Corporal punishment with hickory switches and rulers was not unusual. The picture of a pupil sitting on a chair in the corner with a dunce cap on was a form of punishment used for a child that hadn't done his lessons or who spoke out of turn (or a similar minor offense.) 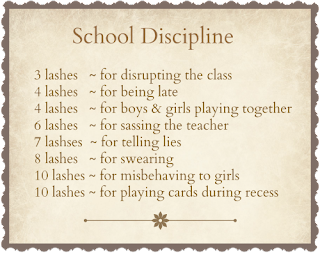 The typical school house was a one-room building. A male teacher and his family often lived in a home next door or attached to the school house--teacherage. Women teachers would be housed with one of the families whose children attended the school so that they could be supervised. (Now that would make it hard to "leave your day job" at the end of the day!)

Teachers had to be creative and work with whatever supplies they had. They used memorization, reciting, and oral testing to teach reading, spelling, arithmetic, and history. For many years, the main textbookwas the McGuffey Reader. A staggering amount, approximately 120 million copies of the readers were sold between 1836 and1960. Many parents could not afford textbooks and so they sent their children to school with any book from home--usually the Bible--for instructions in reading. Eliza Mott was a teacher who taught the alphabet using the inscriptions on tombstones! 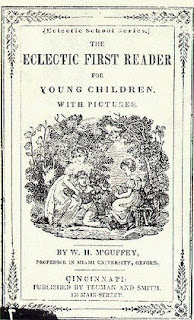 In doing research about the school in Clear Springs where Christmas Kiss from the Sheriff is set, I learned that the main difficulty for the teacher there was staying single in a town that was predominantly men who worked in the goldmines or on the nearby ranches. School teachers would usually only last a year at most before they married.

Influential people who have graduated from one-room schools:


My father and his brothers attended a one-room school house that was built on land his father donated for the school. It still stands (and is now a private home,) down a winding country road in central Illinois. It feels like steppeing back in time a hundred years when I go back for a visit. My grandparent's farmhouse is just around the corner--a country mile away...

One of my "old school" memories is that my Junior High School was situatied right up against the back of the San Diego Zoo next to the wallaby and kangaroo enclosures. When the tour bus would drive by loaded with people, the bus driver would often comment on the "animals" on the other side of the fence--meaning the children on the gym field. It was all in good-natured fun (I think...)

What about you? Do you have any unusual or fond memories of school?

For more information about my upcoming release


Christmas Kiss from the Sheriff

Please check out my website where I have an excerpt posted.
The book is now up on Amazon where it is available for pre-order at a reduced rate!