Fort Union, in New Mexico, was the terminus of the Santa Fe trail where the Cimarron and Mountain Branch met just north of the fort. From Fort Union is was 75 miles to the town of Santa Fe.

The first Fort Union was located near the bluffs about three miles from the present location. This fort, built to protect travelers on the Santa Fe Trail and locals from Indian attacks was built in 1851 and abandoned in 1861. The Ninth Military Department soldiers called it "Fort Windy" for the constant winds blowing through the area.
The second Fort Union was a massive earthwork affair built to defend the Trail from Confederate invaders. This fort, was only in use from 1861-62 after the Confederates were driven from the area.

The third and final fort was a massive affair, built by contractors as opposed to the other sites build by the soldiers themselves, was like a city. This fort was in use from 1863 to 1891 when the railroad service to the area caused its demise. 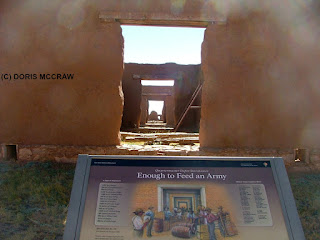 During the heyday of the third fort, it was the main supply base for the Military Department of New Mexico, supplying the other six forts, Fort Sumner, Fort Crag, Fort Stanton, Fort Seldon, Fort Bayard and Fort Cummings, with their supplies. There was a hospital that not only treated the soldiers and their families, but the residents of the surrounding area along with the travelers along the Santa Fe Trail.
The hospital had six wards and over its lifetime had between 10 to 126 beds. It was staffed by two doctors, two stewards, a cook, two nurses and three matrons. In one month they could treat upwards of 425 people, approximately 160 who might need hospitalization. About 40% were civilians who payed 50 cents per day for treatment.

Another interesting fact, the third fort had flagstone walkways throughout the interior, which you will notice in some of the photos.Additionally this fort did not have outside walls. 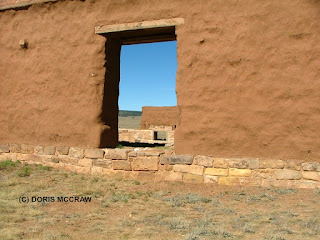 For further information this link will give you a larger overview:  http://www.legendsofamerica.com/nm-fortunion.html

You can learn even more about the Santa Fe Trail and Fort Union here: http://www.kansasheritage.org/research/sft/ft-union.htm


Angela Raines is the pen name for Doris McCraw. Doris also writes haiku posted five days a week at – http://fivesevenfivepage.blogspot.com and has now passed one thousand haiku and photos posted on this blog. Check out her other work or like her Amazon author page:  http://amzn.to/1I0YoeL

Posted by Angela Raines-Author at 4:00 AM