Speaking Trumpet: The Bullhorn of the 19th Century, by Kristin Holt 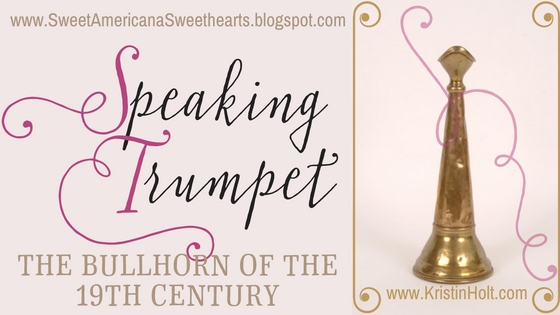 
"As more American volunteer fire fighting companies began to form during the late 18th century, a need emerged for better organized efforts to combat conflagrations. Engineers and officers would use “speaking trumpets” to amplify their voices over the noise and commotion of a fire scene to direct the company in effectively fighting the blaze.

"Two trumpet variants are reflected in the collection: plain and functional “working” trumpets that were actively used at fires, and highly decorated “presentation” trumpets. Presentation trumpets were awarded to firefighters in honor of their service, or between fire companies during visits, competitions, and musters.

"This brass trumpet dates to the 19th century. The shiny and polished horned is plain and unadorned, but shows scratches and dents from use." [Source: Smithsonian, National Museum of American History]


A closeup of the decorative mid-section of the trumpet shows the engraving from 1859. While writing my newest release, Courting Miss Cartwright, a novella contained within Cowboys & Calico--an anthology  of five sweet western historical romances--I researched Speaking Trumpets.

I wrote a scene where virtually everyone in town had gathered 'round a platform to participate in the Picnic Basket Auction to raise money for the Church Organ Fund. The crowd was loud. The officiator called for bids. Midst the laughter, good-natured ribbing of the hero (Rocky Gideon), and surprised exclamations, I realized pretty quick I needed a bullhorn. Or a megaphone, at minimum.

My 1879 setting could not allow a microphone. I knew P.A. systems were out of the question, but who knew megaphones weren't designed nor called such until the mid 20th century? Some readers might not find historical inaccuracies a distraction, but many readers do. I do.

I crave historical accuracy. So I put a speaking trumpet in the event official's hand and put him to work using it. The scene takes place in my heroine (Felicity Cartwright)'s point of view, so to make the likely unfamiliar term make sense to twenty-first century readers who know bullhorns and megaphones but likely never heard of a speaking trumpet, I showed its purpose, appearance, and Felicity's familiarity with it.

This picnic basket auction scene occurs just one chapter from the ending, with some significant U-turns in the story, so I don't want to give too much away. But you can read the first third of that scene in my blog post: A Victorian Picnic Basket…worth $7.50? (And a peek inside Courting Miss Cartwright). This post about picnic baskets and the import of picnics in Victorian recreation and courtship doesn't give too much away nor spoil the story. Note: $7.50 in 1879 more or less equivalent to $178.57 today. WHO spends nearly $180 on a picnic lunch?
I'll introduce you to some of the key players in the opening scene of Courting Miss Cartwright. Four people, well, five, if we count the deceased father. 1-- Father. 2-- W.W. Stuart (Father's attorney), 3-- Felicity Percival [Cartwright](heroine), 4-- Rocky Gideon (hero), and 5-- Temperance Cartwright (heretofore unknown half-sister). One of them pays $7.50 in 1879 dollars for Felicity's picnic basket. And I'll give you one hint: Felicity doesn't buy her own.
This set of Sweet Western Historical Romance Novellas was released last Saturday, July 30th. You'll find my contribution nestled in the middle of four well-loved authors: Amelia C. Adams, Cassie Hayes, Margery Scott, and Kirsten Osbourne. As of 8-3-16, the anthology has an overall average of 4.9 stars from 25 reviews on Amazon.

Yes, it's an inexpensive set. Five NEW novellas for $0.20 each. Twenty cents! And it's a FREE READ with a kindleunlimited subscription.

In your reply, simply let me know what you think about Speaking Trumpets. Kind of cool that they're historically accurate? Have a hard time believing they work as well as a cheerleader-style Megaphone? Like the collector's item silver decorative one pictured in this post? Write something.

Then don't forget to CHECK BACK (you may want to subscribe to the post). I'll post the winners HERE, in the comments section, just after midnight in the wee hours of Saturday morning (8-6-16). Winners need to provide me (privately) your email address, as Amazon requires it for me to 'gift' you a kindle edition of this book. This title will only be available for a few months' time and will only be in kindle edition. 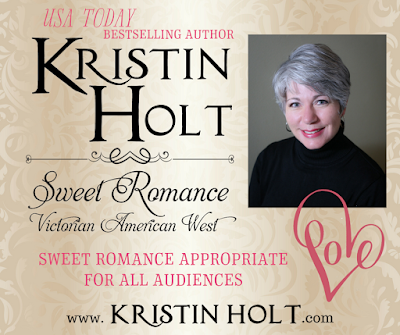