What’s in a Name?

One of the first steps in my writing process involves searching for just the right name that creates an image or impression for that character. For walk-in characters or ones with a small role, ordinary names are okay because as an author, I don’t want them to stand out or gain personality quirks.


For my main characters, I have always sought unique and hopefully memorable names. Probably a carryover from real life because that’s how I chose my own children’s names.


Another part of the initial creation is what ethnicity I want for the characters. Will this factor have an impact about their goals or possibilities in making a successful life? Often with historicals set in America, I need to factor in the time in history when a large number of a particular ethnic group immigrated. Can’t really have a story about Scandinavian farmers in the western Great Lakes area (present-day Wisconsin) in 1790 when the biggest influx wasn’t until 1830-1840. Or I can’t put a big number of Spaniards in Vermont. 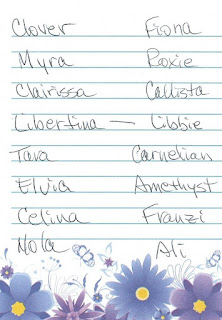 In the meanings of the names, I find a personality characteristic that becomes a core element for that person. As I think of my heroes, I realize I choose one-syllable names a lot (Luc, Cord, Slade, Finn, Whit, Holt, Roark, Rey, Dez—to name a few). With those choices, I’m relaying a strength, a solidity for the heroine to rely on. As with many female names, the ones I choose for a heroine end in the letter “a” (Vena, Lyssa, Hanna, Rikka, Ciara, Kimbra, Dissa) which highlights a softer aspect of their natures.


When I was plotting my story Dreams of Gold, I wanted a name for my Irish heroine that flowed off the tongue and that the reader could envision was being spoken with an accent, so I picked Ciara Morrissey. For the hero, I wanted a name that conjured the image of a no-nonsense man. My ex-soldier became Quinn Riley.


So, next time you start a new romance story, consider the author’s intent in choosing the names to fit the characters.


Easterner Ciara Morrissey travels west to honor a sacred promise to her mother and locate her fortune-seeking father. Three years of acting as caretaker to her grandparents and mother until their deaths has created a thirst in Ciara to see what the wide world has to offer.


Sheriff Quinn Riley has been tracking the Irish charlatan who swindled half the population of Bull City, Wyoming. He’s determined to stick close to the opinionated woman who arrived on the runaway stagecoach. Within only a few hours, easterner Ciara Morrissey upsets the townspeople by making inquires about his prime suspect. He’s duty-bound to keep her safe, even when being close to the green-eyed beauty sets off a stampede in his heart.


To keep updated on upcoming release, please join my quarterly newsletter list.
Posted by Linda Carroll-Bradd at 1:24 AM