Last week marked the release of An Unlikely Marriage, my second story in Debra Holland’s Montana Sky Kindle World. Secondary characters Torin and Nola from the first release, Laced By Love, are the protagonists in this novella. Not only did I get to view the wedding ceremony from a different viewpoint but I enjoyed delving into the relationship between the sisters. Instead of taking place in tiny Morgan’s Crossing, this story starts out with some familiar characters in Sweetwater Springs. 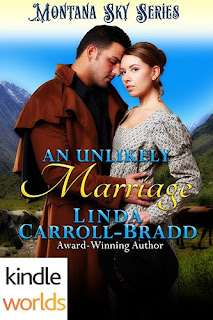 
Helping injured cowboy Torin Quaid drive mustangs north provides a way for vaudevillian Nola York to earn a train ticket east—and get one step closer to her goal of auditioning for Buffalo Bill’s Wild West stage production. The temporary marriage is solely for propriety’s sake. Until disaster strikes, and the two must rely on each other—emotionally and physically—to safely reach Torin’s ranch. Will a marriage of convenience turn into more on a trail drive through Montana Territory?


Ten minutes later, all four adults stood in the show wagon’s middle aisle, and no one could move more than a few inches. Thankfully, the dogs were bedded down in their crates built under the cushioned settee that Cinnia claimed as her bed for the night.


Nola and Cinnia requested two minutes behind the sleeping area curtain to put on nightgowns. They wiggled and flopped like fish on a riverbank to slide off their petticoats, drawers, corsets, and chemises before slipping warm flannel gowns over their heads. Taking turns, they removed the pins from each other’s hair then plaited the lengths into single thick braids.


When she climbed down to put away her dress, Nola was careful to clutch the sides of her red gown close to her thighs. Wearing night clothes around males—no matter how sensible and opaque—sent an uncustomary flush to her cheeks. After opening the door, she glanced inside the tallest cupboard, normally filled to the brim with the special dresses of three performing women. The sight of the empty space was another reminder of tomorrow’s farewell. Her throat tightened. She draped the neckline of her rust-colored gown over the farthest wooden peg. Now all the dresses she owned could be unfolded from the storage drawers and hung in this cupboard.


From behind, a firm body bumped then steadied her. “Excuse me.”


The heat from Torin’s hand on her hip seeped through the single layer of flannel and branded her skin. Shaking her head at the nonsense of thinking he’d staked his claim, Nola held up her hands. “We’ve managed this before. What is the problem?” Her personal crisis was the thought of what would come in the next few minutes when she shared a mattress with her…uh, Torin. She couldn’t risk thinking of him as her husband—that would suggest a level of marriage they hadn’t agreed to.


Cinnia pointed between the two men. “They take up more space than you, me, and Dorrie did.” Moving behind Nic, she eased along the aisle to pull open a cupboard door and store her dress and underclothes. “Whatever clothes you men remove need to go into a cupboard. One of the secrets of living in harmony inside a wagon is tidiness.”


A deep groan sounded. Torin clapped his good hand over his heart and turned to look at her, brow wrinkled. “We’re doomed, my dear Nola, because I am a slob.”


“I’m not worried.” Nola scooted the dowels for the hammock to the edge. Then she flashed a smile over her shoulder as she climbed into the sleeping alcove. “I’m a great organizer.” Once on the mattress, she dove under the quilt and scooted to the far edge, near the hatch that led to the driver’s bench.


“Nic, grab the ends here. Nola says the dowels fit in grooves along the cupboard bottoms. This is your sleeping hammock.” With a grunt, Torin climbed up onto the bed and pulled the curtains closed. Silhouetted by lantern light, he curled his large body nearly in half to unfasten his outerwear. Mutterings accented each move, as using only one hand, he scooted his pants down his legs. A minute later, his jeans and shirt dropped to the floor with a thump.


At least, he’s wearing drawers and an undershirt. The pinch of unease loosened from her chest. She’d wondered if he was the type to wear a nightshirt. Since his mustang round-up involved sleeping along the trail, he probably had to be ready for anything as he bedded down each night. Nola breathed in the scent of the campfire clinging to their skin and hair. A scent she’d be experiencing over the next two weeks. Good thing, she liked outdoor smells.


Rustling and jostling noises came from the front of the wagon as the other two got settled in.


A whoosh sounded right before the lantern light disappeared. The moonlight filtering through the curtained window fell across their bed, making Nola aware of a much-bigger body occupying the other half, or two-thirds, of her mattress.


Too tall to fit the mattress length, Torin laid at an angle on his right side, facing the curtain. The quilt barely covered the top of his shoulder.


Probably the most comfortable position for his wrapped left wrist. His injury. Her thoughts stilled, and she bit back a gasp. In all the hustle of the wedding and setting up the camp, she’d forgotten to offer him willow bark tea. He’d had at least one cupful every morning and evening since they’d met. She levered herself up on an elbow, wondering if Torin was still awake and if she should offer to remedy the oversight.


A breathy snore was her answer.


One simple wifely duty, and she’d failed. An omission that boded ill for the next two weeks.
~~**~~

My first story in the Montana Sky Kindle World 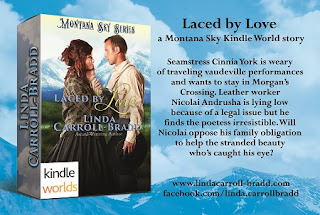 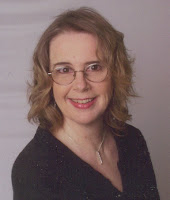 After years spent in the administrative support field, Linda decided to exercise another part of her brain and write a novel. She loved reading romance and figured that’s what she’d write. Easier said than done. After years of workshops and RWA chapter meetings, she finally saw her manuscripts place in contests. Twelve years after her first writing class, she sold a confession story. From that point on, she couldn’t be stopped and is always pleased when her sweet-to-sensual contemporary and historical stories find homes.


With interests as widespread as baking, crocheting, watching dog agility matches, and reading thrillers by Swedish authors, Linda is the mother to 4 adult children and grandmother to 2 granddaughters. She currently lives in the southern California mountains with her husband of 37 years and their two much-loved dogs.


To keep updated on upcoming releases, sign up for her newsletter here
Posted by Linda Carroll-Bradd at 2:00 AM