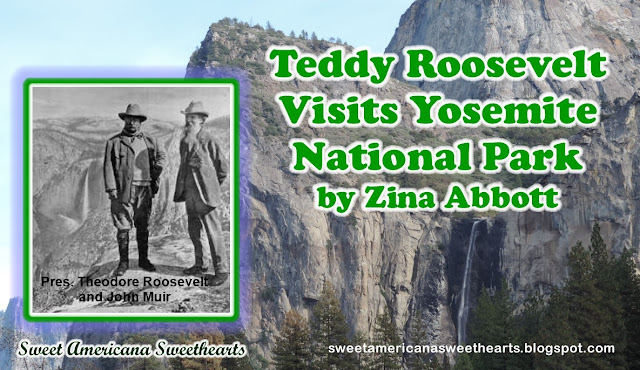 In 1903, President Theodore “Teddy” Roosevelt visited Yosemite National Park. Guided into the Yosemite wilderness by naturalist John Muir, the president went on a three-day wilderness trip that started at the Mariposa Grove.
He also visited Sentinel Dome, Glacier Point, and Yosemite Valley among other points of interest in the park. Muir seized the opportunity "to do some forest good in talking freely around the campfire," and the President, referring to John Muir, is quoted as saying "Of course of all the people in the world, he was the one with whom it was best worth while thus to see the Yosemite."
President Roosevelt, accustomed to being surrounded by enthusiastic crowds, wanted his experience to the park to be one of isolation and “roughing it.” For most of his journey he was accompanied by only four others: John Muir, two of the men hired as the first civilian park rangers in 1898, Charlies Leidig and Archibald C. Leonard, and a packer (Army packer Jacker Alder). President Roosevelt slept on a stack of forty wool blankets covered by a shelter half. Food for the party was cooked over an open campfire by Charlie Leidig.
From Charlie Leidig’s Report of President Roosevelt’s visit: “On May 3/16, 1903, …they broke camp at Mariposa Grove and were on horses by 6:30a.m. The president directed Leidig to “outskirt and keep away from civilization.” Leidig led the party down the Lightning Trail. They crossed the South Fork at Greeley’s and hit the Empire Meadows Trail. They especially avoided approaching the Wawona Hotel for fear the President would be brought in contact with members of his own official party which had remained for the night at Wawona. They had a cold lunch on the ridge east of Empire Meadows. There was lots of snow as they crossed towards Sentinel Dome; they took turns breaking trail through deep snow. In the Bridalveil Meadows the party plowed through5 ft. of snow. The President mired down and Charley had to get a log to get him out. It was snowing hard and the wind was blowing.” 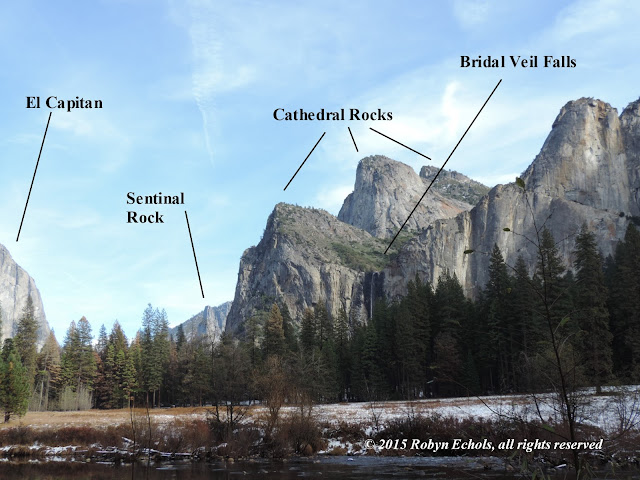 As they left Glacier Point, the President rode in front dressed in civilian attire. The rangers wore blue overalls, shaps and spurs. They went into Little Yosemite Valley for lunch. Here they encountered a considerable crowd of valley visitors, since it had been widely advertised in the papers that the President was visiting the park.
There was considerable disagreement in the matter of plans for the Presidential visit. The President wanted a roughing trip and through Pardee, Wheeler and Muir such a trip had been worked out. On the other hand, Mr. John Stevens, Guardian of the Valley under State administration, and certain of the commissioners, especially Jack Wilson from San Francisco, had made plans for a large celebration. The Chris Jorgensen studio home had been set aside for the President’s official use. A cook had been set engaged from one of the best hotels in San Francisco to serve a banquet. The commissioner had arranged a considerable display of fireworks, which John Degnan claims amounted to some $1800 worth….
So there was considerable party awaiting the President at the top of Nevada Falls and Little Yosemite. The President requested that all the people be kept at a distance in order that he could carry out his desire for a “roughing trip”, so everybody was kept at a respectful distance.

When the party reached Camp Curry at 2 P.M., they found a big crowd of women in front of the camp. They had formed a line across the road in an attempt to stop the President. They all wanted to shake hands with him. Charlie Leidig states, he was riding second in line with a Winchester rifle and six shooter. His horse was a high spirited animal. The President said, “I am very much annoyed, couldn’t you do something?” Leidig replied, “follow me.” He gave spurs to his horse and as he reared, women fell apart and the President’s party went through the gap. The President waved his hat to the group in the road.
…..Accompanied by five or six members of his party, the President walked back across the Sentinel Bridge to his horse. Muir had accompanied the President to the Jorgensen studio. The original party of five mounted their horses and started down the valley to pick a camp site near Bridalveil Falls where Muir had suggested they spend the last night in camp….They went down the south side of the [Merced] river followed by a big string of people on horseback, in buggies, surries, and others on foot. Leidig stated there must have been between 300 or 500, or possibly 1000 of them in the crowd, filling the Bridalveil Meadows. As they reached their camping places on a grassy slope just south of the present road through Bridalveil Meadows, the President said to Leidig, “These people annoy me. Can you get rid of them?” Charlie said he walked out and told the crowd that the president was very tired and asked them to leave. They went—some of them even on tiptoe, so as not to annoy their President.

When Charlie returned to the camp site the President said, “Charlie I am hungry as Hell. Cook any dam thing you wish. How long will it take?”

Charlie told him it would take about 30 minutes, so the President lay on his bed of blankets and went to sleep and snored so loud that Leidig could hear him even above the crackling of the campfire.

After dinner, Muir and the President went out int the meadow until way after dark. When they returned they sat around the campfire where the President told them of his lion hunting trips.

People came again in the morning. Crowds could be seen all through the brush. Leidig kept them away. The stage came down containing the President’s official party. After breakfast, the President and Muir got into the stage and as they left the President called Leidig and Leonard to him and said, “Boys, I am leaving you. Good-bye, and God Bless you.”
Roosevelt is quotes as saying, "There can be nothing in the world more beautiful than the Yosemite, the groves of the giant sequoias...our people should see to it that they are preserved for their children and their Children's children forever, with their majestic beauty all unmarred." While he was president, Theodore Roosevelt established five national parks, 18 national monuments, 55 national bird sanctuaries and wildlife refuges, and 150 national forests.

It has been my privilege as a volunteer in the Merced California Family History Center to have worked with sisters Lucille C. Davenport and Joyce C. Hammer, descendants of Park Ranger Archibald C. Leonard. With their permission, I will be telling a bit of their grandparent’s story in next month’s blog.


Charlie Leidig’s Report of President Roosevelt’s Visit in May, 1903

Zina Abbott is the pen name used by Robyn Echols for her historical novels. The first four novellas in the Eastern Sierra Brides 1884 series, Big Meadows Valentine,  A Resurrected Heart, Her Independent Spirit, and Haunted by Love are now available.