I'll admit it ~ I loved watching Doctor Quinn -- Medicine Woman. It was an addiction for a while. (I am over it now thanks to the 12-Step Process ;-) As a nurse, the medical facts on that show fascinated me up until the end when it became more of a "disease of the week" type drama. Then I missed the romance that had drawn me in the first place and my viewings tapered off. 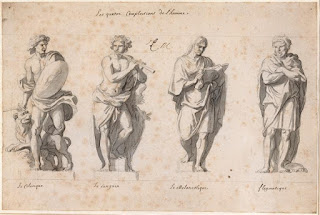 Although the nineteenth century has been termed "The Golden Age of Medicine" the doctors of the Texas wilderness still practiced medicine much as it had been practiced since the Middle Ages using the ancient Greek theory of the four "humors." Blood was thought to come from the heart, phlegm from the brain, yellow bile from the liver, and black bile from the spleen. According to this theory, disease and sickness occurred because of an imbalance in one of the humors. If one was in excess, it had to be removed or equalized, hence the use of emetics to induce vomiting and the practice of cupping or draining a certain amount of blood to remove the "harmful humor."

Wounds and bacterial infections caused the majority of deaths and disabilities. Doctors of this time battled malaria, yellow fever, pneumonia, cholera, dysentery, post partum infection, tuberculosis, measles and small pox. They could splint fractures, suture wounds, perform amputations and drain infections (and all with unsterile technique.) For medical instruments, many had only stethoscopes. Other tools--saws and knives came from the kitchen. 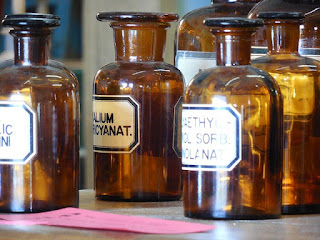 For a treatment to be effective, most thought it had to have a foul smell or taste. Powders were sought over tablets, and colored tablets over white ones. Some medicines in use at the time included quinine, calomel, blue mass pills, belladonna, ipecac, columbo, asafetida, boneset, squill, pokeweed, hog'sfoot oil, castor oil, digitalis, lobelia (or Indian Tobacco.) There were many home remedies and poultices and plasters were common--some producing enough heat to burn the patient.

Morphine or laudanum was often prescribed for pain relief. Also, paragoric (camphorated tincture of opium) was used to inhibit diarrhea, coughing, and to calm fretful children. The concept of drug dependency was not considered. Anesthesia with nitrous oxide, also know a s laughing gas, was not used for surgery until 1844, although one New Orleans doctor used ether several years earlier. Before this, the most sought-after surgeons were the ones who worked fast so that the pain would be less. In 1947, chloroform was first used for pain during delivery. 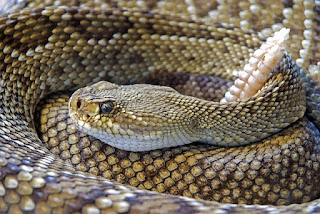 Here are a few home remedies used back then. DO NOT TRY THESE! I have no idea as to their efficacy or safety, but I found them interesting to read about. Information was obtained from A Pinch of This and a Handful of That: Historic Recipes of Texas 1830-1900.

Snake and Spider Bites -- Beat onions and salt together, wet tobacco, mix thoroughly. Split the wound and apply at once.

Warts -- Take a persimmon stick and put as many notches on it as you have warts. They will go away.

Sores -- (1895) Powdered alum is good for a canker sore in the mouth. Never burn the cloth bandage from a sore; you must bury it for the sore to heal.

Knife Cuts -- (1853) Clean wound well and apply a piece of fat bacon or fat back. Strap it on for several days.

Puncture Wounds (Nails, Gunshot) -- Put some old wool rags into an old tin can, pour kerosene over the rags and light. Then smoke the wound. This also works with chicken feathers.

Bleeding from the Nose -- Bathe the feet in very hot water, while at the same time drinking a pint of cayenne pepper tea or hold both arms over the head.

Other bleeding -- Place a spider web across the wound.

All I can say is that I am glad to be in a time and place that has better medical advancements.  I'm sure we will look back in another hundred years and say the same about NOW!

Have you heard of an unusual remedy? 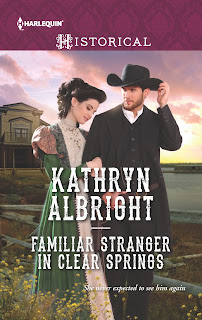 My newest release is a sweet, western historical set in early southern California. I am happy to say that no one gets bitten by a rattler in this story! To see an excerpt click HERE.

"Sometimes the one who got way is just waiting to step back in and sweep you off your feet."

For a chance to win a copy of

please leave a comment! For extra entries into the contest, please "Like" my Page on Facebook and let me know. Giveaway ends February 12th at midnight. (Continental U.S. only)

To Purchase this book: