MAIL-ORDER BRIDES OF THE WEST: BERTHA
By Debra Holland 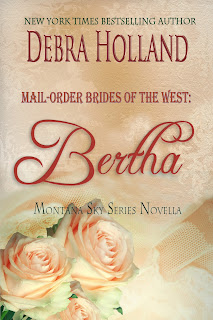 Bertha Bucholtz returns to her St. Louis home after an unsuccessful stay at the mail-order bridal agency. Her family house is overflowing with her thin, beautiful sisters and their many suitors, and shy, overweight Bertha is lost among the chaos. Even her baking skills—so praised at the agency—aren’t special, for her six sisters and her mother are also excellent cooks. Desperate to be living on her own, Bertha searches for a job as a cook but with little success.


Then a letter arrives from her nemesis at the bridal agency. Shrewish Prudence Crawford, now Mrs. Michael Morgan, invites Bertha to move to Morgan’s Crossing, Montana Territory and work as a cook and housekeeper at the boarding house for her husband’s miners.


Upon her arrival in Morgan’s Crossing, Bertha has to contend with Prudence, who seems to have mellowed—or has she? The boarding house is dirty, run-down, and full of uncouth miners. As the only single woman for miles around and a lauded cook, Bertha quickly becomes the siren of the tiny town as well as nearby Sweetwater Springs, as miners and cowboys flock to court her. Now the shy woman who had no choice of suitors has an abundance of them to pick from. She never would have dreamt having too many swains was a bigger problem than having none at all.

Howie paused in a dark corner of the porch. Two wagons. How was he supposed to know which one contained Miss Bucholtz, whom he’d agreed to watch over? Then he saw the wagon in the lead had two ladies on the seat next to a man. Figuring if the middle woman sat next to her husband, then the woman on the outside with a lantern in her lap must be the new cook. He headed in that direction.
Before he got there, the driver helped the woman in the middle climb down on his side.
“Trudy!” Mrs. Morgan called, hastening over to her friend and giving her a hug.
More sure now he had the right woman, Howie halted beside Miss Bucholtz and saw his image of a thin, older woman was entirely wrong. In the glow of the lantern, he could see she was young, probably not even as old as Mrs. Morgan. Her thick blonde hair was pulled back from a pretty, round face.
Suddenly self-conscious, Howie wanted to melt into the shadows, but resisted the impulse. He’d promised to take care of this woman.
Miss Bucholtz shifted the lantern, showing more of her face.
In the uncertain light, he could see the apprehension in her eyes and lost his reticence in a wish to put her at ease. “Miss Bucholtz?”
She nodded.
“I’m Howie Brungar,” he said in his calmest voice, the one he used with skittish horses. “I work for the Morgans. Let me take that.” He reached up for her lantern.
She relinquished the light.
He set the lantern to the side on the ground, straightened, and extended his hand to her.
She hesitated, biting her lip.
Is she too shy to allow me to help her down? Is something else wrong? Howie wondered if he should back away. She might be more comfortable with the aid of Mr. Flanigan or Mr. Walker, whom she’s more familiar with. But he wanted to be the one she trusted, not only because he was supposed to be watching over her, but also for another reason, one he couldn’t pinpoint. “You’ll be quite safe with me.” He left his hand in place. “Come on, now,” he coaxed, willing her to trust him.
Miss Bucholtz shifted to face him and climb out. She gave him her hand. Just as her foot was fishing for the step, something made her glance to the side. In so doing, she missed and overbalanced. With a cry, she fell into him.
Howie caught her, bracing against her weight. The fullness of her breasts pressed against his chest. Making sure he held her securely, he slowly lowered her to the ground, feeling an arousal in response to the slide of her rounded body against the front of his. He didn’t release her right away, for his arms seemed to have developed a mind of their own, locking around her feminine form.
Time must have frozen, because Howie felt like he held her forever, even though he supposed the whole incident had taken much less than a minute. “You steady, Miss Bucholtz?” He hoped her answer was no, so he had an excuse to prolong their embrace.
She nodded and looked away.
But not before he saw a look of shame on her face. As a gentleman, he had no choice but to release her, despite having a primitive urge to roar and carry her off to his cave. Shaken by his sudden longing, he stepped back and lowered one hand, keeping the other on her to make doubly sure she was stable on her feet. Even through her coat, he could feel the curve of her arm, making him aware of their differences—man and woman—hard and soft.
“I’m sorry,” she whispered, looking down, obviously still embarrassed.
A surge of masculine energy gave him unexpected boldness and made him long to touch one finger under her chin and raised her face so their eyes could meet. “Don’t be sorry, darlin’,” he said in his best cowboy drawl. “For I certainly am not. It’s not every day a man like me gets to assist such a pretty lady. Anytime you need helping in or out of a wagon, you just give me a holler,” he said in a teasing tone. “I’ll be right there.” Hoping you’ll fall into my arms again.
Even as he reassured her, Howie wondered what stranger had just taken over him. But he couldn’t bring himself to mind, especially when his outrageous flirting chased the embarrassment from her face and drew an upward glance and a shy smile from her.
He moved his hand away from her arm and stepped back to let the Morgans come to her.
Glad of the darkness and hoping his body would quickly cool down, Howie hurried to the back of the wagon to begin unloading. But he carried with him the memory of Bertha’s smile and the tempting feel of her body in his arms. 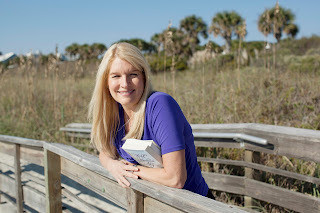 Psychotherapist Debra Holland, Ph.D is the New York Times and USA Today Bestselling author of the Montana Sky Series, sweet, historical Western romance. She’s a three-time Romance Writers of America Golden Heart finalist and one-time winner. In 2013, Amazon selected Starry Montana Sky as a top 50 greatest love stories pick. Her latest book is Healing Montana Sky, from Montlake Romance.
Debra is also the author of The Gods’ Dream Trilogy (fantasy romance) and the nonfiction books, The Essential Guide to Grief and Grieving and Cultivating an Attitude of Gratitude: a Ten-Minute eBook. She’s a contributing author to The Naked Truth About Self-Publishing. Join her newsletter at http://debraholland.com and receive access to her Members Only Section

Purchase MAIL-ORDER BRIDES OF THE WEST: BERTHA on Amazon by clicking HERE.