and how we stumbled upon this hidden gem. 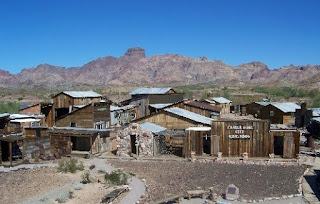 Only a four hour drive away from where we live in the southern California mountains is Yuma, Arizona so off my husband and I headed for a much-needed weekend away. I’m the type who travels with paper maps and the AAA travel guide with all the rated attractions marked with sticky labels. My husband has all he needs in his smart phone and a couple of review sites. Because we didn’t leave until after 6PM, he begrudgingly agreed to calling ahead for a motel reservation. I use the term ‘begrudgingly’ because his birth family set out on the road for the entire summer, Suburban hauling a trailer, as soon as school let out, so he’s used to driving until tired and then looking for a place to stay. Me, I like national chains for motels and restaurants.


Our first day was spent at a couple of state museums—the quartermaster depot and the territorial prison. We learned some interesting facts that may come in handy in a book someday. But he wanted someplace different so he started cruising around on his phone. So the next day we took a different route, past the Arizona proving grounds toward Castle Dome, a mining ghost town. Once off the state highway at mile marker 55 for only a couple of miles, the paved road ended and we rolled onto a gravel road. My reaction was concern about our Prius navigating the road unharmed. My adventure-loving spouse told me to go for it. Eight miles later (paralleling a barbed wire fence warning “Danger--unexploded ordnance”--gulp), we reached the ghost town.


A couple ready to retire, Allen and Stephanie Armstrong, bought the site where gold mining occurred in the 1860s and set about creating this village of 40+ buildings out in the middle of nowhere. By nowhere, I mean the ride by stagecoach from Yuma must have taken an entire day, or maybe they camped out for one night. The terrain is desert complete with saguaro and prickly pear cactus and mesquite bushes. And lots of dust and rocks. From a note in one of the buildings—“the first description of Castle Dome City was of a brush house, an adobe under construction, 2 tents, and 2 fenced in lots. Over the years, Castle Dome boasted of a school, 5 bars within a mile, [city stretched along a river] two mercantiles, a church or 2, sheriff’s office and jail, assay and mining offices, entertainment spots, blacksmith shop and numerous dwellings.”


The Armstrongs fixed up what was there, brought buildings from other mining ghost towns or from federal property to this location and recreated what Castle Dome might have looked like in its heyday when its population exceeded 5,000 and was greater than Yuma. But as with a litany of long-forgotten mining towns, when the shiny gold played out, the inhabitants drifted away to their next money-making opportunity.  The Armstrongs are to be commended because each and every building held artifacts of the era. A self-guided tour gave us (and the dozen other visitors we saw) a sense of the people who chose to live there. As I walked among the buildings, I could picture the interactions between the business owners and started imagining the backstories of those long-ago inhabitants.


Here is the exterior of one of the bars and a couple interior shots of the mercantile. Can you imagine a time when what was on the shelves made up the total of your selections? 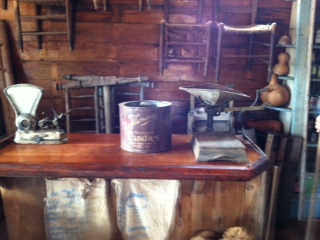 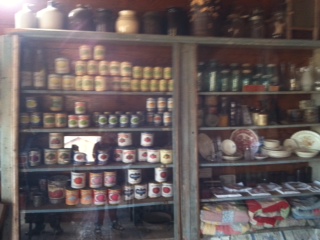 I guess if you’re a history lover, then what better way to demonstrate that than by creating a living museum? I'm always interested in learning of other living museum sites. Please share where you've been.


Linda Carroll-Bradd’s latest release is A Cowboy Celebration, a western historical anthology from Prairie Rose Publications. Check out her website for other titles www.lindacarroll-bradd.com or sign up for her newsletter to learn of upcoming releases (2 in October).
Posted by Linda Carroll-Bradd at 2:30 AM