Each a native name for what we know as the American Bison. 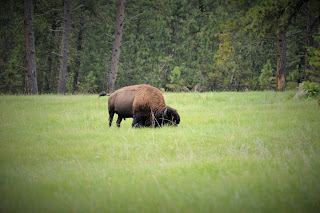 Wild and regal, its story is intricately woven in the folds of American history.  In the early eighteen hundreds, over fifty million head of buffalo roamed North America, providing essential substance for the tribes of the great plains.  By the end of the nineteenth century, after half a century of westward expansion, only an estimated one thousand remained. 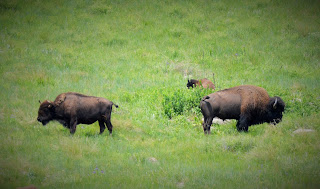 Why were buffalo so important to the plains tribes? Without the buffalo, the plains people could not survive. After a hunt, no part of the buffalo went to waste. Fresh meat was cooked, and what couldn't be eaten was dried and made into jerky or pemmican (dried meat, fat, berries and/or seeds). Hides were used for clothing, shelter, bags, saddles and much more. Tails were used as fly swatters and the hair used for ornaments, pillows, halters and ropes. Horns made great cups, powder horns and ladles. Stomachs were often used as cooking bowls (can you imagine??) and other dishes. There were many uses they found for buffalo parts, and I can't begin to touch on them all, but it's absolutely fascinating how this one animal provided them with all they needed. 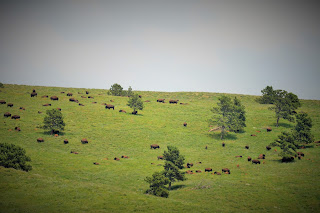 Because of conservation efforts, and the rise of buffalo as livestock, the majestic animals once again have a spot on the American landscape. Today, there are approximately two hundred thousand bison on private lands, thirty thousand on public land and fifteen thousand considered wild, free-range bison. (International Union for Conservation of Nature). All pictures on this post come from the herd at Custer State Park in South Dakota. 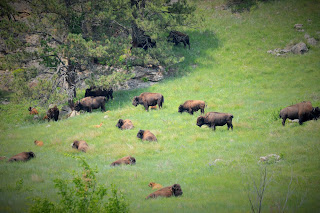 1) They can weigh up to two thousand pounds.
2) Despite their heft, they can run at an impressive forty miles per hour.
3) They are herbivores that can eat up to sixty pounds of grass and food a day.
4) Their average life expectancy is twelve-twenty years, but they can live up to thirty years.
5) Though we widely refer to American bison as buffalo, true buffalo only live in Asia and Africa.