From Benton's Mill to Bagby to a Reservoir


The Bagby Recreation Area is known to most Merced and Mariposa County residents only as a place to go boating and fishing. Many do not realize underneath the water of the reservoir lies the remains of a community that got its start in 1850 during the gold rush era in California. 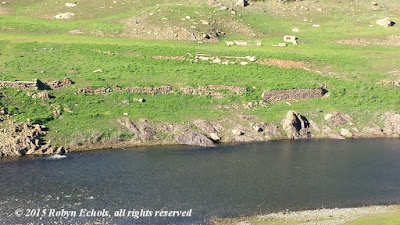 One of the "benefits" of the four year drought we have experienced in California is that the water flow in what is known as the Bagby Reservoir is so low it is back to being the Merced River. Exposed on the northern banks are the rock and masonry remains of the former gold processing community of Benton’s Mill, which was later renamed Bagby.


The area below the steel bridge which carries Highway 49 across the river at Bagby started out as the site of Ridley's Ferry which ran from 1850 to 1859. 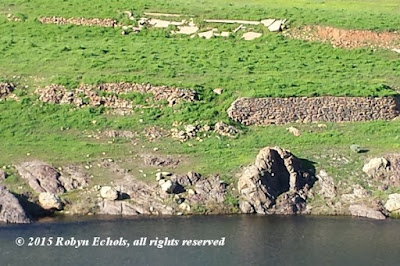 The famed explorer-warrior-politician-pioneer John C. Fremont claimed this area in 1850 as part of the grant he had purchased from Juan Bautista Alvarado, one time governor of California, and the region still is known as the Fremont Grant. Babgy marks the northern limit of the vast Fremont Grant which covered 44,500 acres of the rolling country for miles around- and even more when Fremont discovered gold beyond the boundaries. 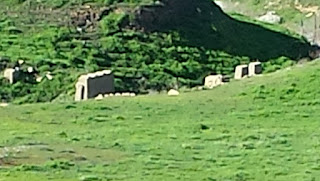 From the present Highway 49 bridge one can see the piers that once held a powerhouse erected by General Fremont to operate his extensive mining and milling activities.  The surrounding hills are pocked by old mines. The Pine Tree and Josephine Mines are secluded in the mountains between Bear Valley and Bagby.  A section of the old grade for the tramway which carried gold rich ore from the mines now serves as part of the Mother Lode Highway approach to Bagby.


Originally the community which included stores, a hotel, boarding houses and saloons was called Benton's Mill, named by Fremont after his father-in-law, United States Senator Thomas H. Benton, whom he greatly admired. Nearby Mount Bullion was also was named after Senator Benton whose nickname was "Old Bullion." Benton’s Mill was once a mecca for gold seekers who stopped there for provision.


The renaming of Benton's Mill resulted from the friendship between the late Benjamin Abner  Bagby and N C Ray, an engineer of the Yosemite Railroad Company line. Ray later became a member of the state's railroad commission. When summoned to Washington, DC on business, he asked Bagby what favor he could do for him. The request was for there to be a post office at Benton's Mill.


Ray found Washington officials receptive to the idea but opposed to the name because California already had a post office designated as Benton.  Ray immediately came up with the name Bagby. That name became official in 1900 with the establishment of the post office.

The Yosemite Valley Railroad was built to run through the rugged country that included Bagby from Merced to El Portal, the gateway to Yosemite National Park. Starting in 1906, Bagby welcomed the travelers and prospectors as they made their way into the rich Mother Lode and watched logs shipped from higher in the mountains down to the Valley. Bagby was the only town in Mariposa County with a rail station. As Yosemite National Park became a famous tourist destination, the railroad with its elegant accommodations including sleeping cars carried passengers through Bagby to the park entrance.


But as the gold and ore veins became depleted, the railroad slowly folded its operations. The Yosemite Valley Railroad made its final run in 1945. After it ceased operations, the tracks were removed. From that point on, people began to drift away from Bagby.


The last part of the Bagby marker in the recreation parking area above the boat ramp reads:

“At its demise, Bagby diminished to a fisherman’s resort when inundation threatened in the early 1960’s. Yosemite officials arranged removal of a turntable, twin water towers, and the Bagby Station to the Yosemite Pioneer Transportation Center at El Portal. Bagby’s remaining structures and old bridge were razed in late 1966. Where a stamp mill thundered and trains chugged, boaters now float. Among the first to launch a boat was B. A.Bagby’s son, Everett.”


Down to 25 residents, the community of Bagdy was doomed once the Merced Irrigation District developed a plan to raise Exchequer Dam an additional 180 feet, increasing Lake McClure from 281,000 to 1.1 million acre feet. The remains of Bagby, once a bustling community which had its beginnings even before  Gen. John C. Fremont built his gold milling facilities on the Merced River here, were heaped into several piles and set on fire. 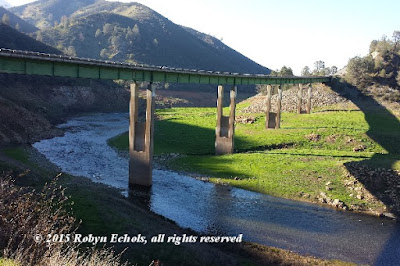 Now, only when the water level of Bagby reservoir drops low enough that the water flow once more becomes no more than the Merced River can travelers see the brick and rock remains of the community.


To reach a website with some interesting photographs of old Bagby and the reservoir level in 2006 before the start of our current drought (which you can compare with my February 2015 photo taken after our fall and early winter rain), click HERE.

Zina Abbott is the pen name used by Robyn Echols for her historical novels. Her novel, Family Secrets, was published by Fire Star Press in October 2014 and her novelette, A Christmas Promise, was published by Prairie Rose Publications in November 2014. The first two novellas in the Eastern Sierra Brides 1884 series, Big Meadows Valentine and A Resurrected Heart, are now available.

The author is a member of Women Writing the West, American Night Writers Association, and Modesto Writers Meet Up. She currently lives with her husband in California near the “Gateway to Yosemite.” She enjoys any kind of history including family history. When she is not piecing together novel plots, she pieces together quilt blocks.

Posted by Zina Abbott Author at 2:17 AM