WHY I DON'T WEAR A CORSET: Rational Dress by Marisa Masterson

If you're a woman, maybe you've wondered it the same as me. Why don't we wear corsets? And when did women stop wearing long hems?

It's a complex answer. In these few paragraphs, I'll attempt only one small part. It has to do with the Rational Dress Movement pushing to change female fashion.

At the same time that women were pushing to gain the vote, some pushed in the area of fashion. Women argued that corsets restricted movement, as did overly long hems. The corset even constricted breathing which limited what a woman could do as well as the speed at which she could do it. With the creation in the 1800s of many of our popular sports, women were left out of them.

I like the above photo because it shows the shorter hems and the divided skirt that women adopted. They were more willing to do this than to wear bloomers. Those were for the truly militant woman of the age.

This commonsense movement also proposed something called the Liberty Bodice. Instead of steel or bone shaping the waist, this garment had stiff cloth. It was tight over the bust and had a row of buttons running down the front so a woman no longer needed someone to tighten her laces for her. Independence and more freedom of movement!

I wove this into Sylvia's Secret (a romance featuring the suffragist movement and rational dress):

The two women hurriedly packed. Each had a maid who helped. Helga cried as she found nightgowns and delicate undergarments in drawers and placed them in Sylvia’s small trunk. When she brought out corsets, her employer stopped her.
“No, I won’t be wearing them. And I don’t want the dresses that require them.” She bent over to touch her toes. “See, Helga, I’m free for the first time in a very long time. I won’t give that up.”

And later, in a scene where the heroine needed to escape from the villain of my piece:

His sneer turned into glowing triumph as he smiled widely. “I have a carriage ready to take you for a ride.”

Don’t show fear! “Do you know, Horace, that you remind me of the wolf in Little Red Riding Hood?”

Sylvia forced out a laugh. It sounded high and shrill to her pounding ears. “Grandmother, what big ears you have? That fits, doesn’t it?”

Horace lifted his hand from the arm he held to cover one ear. He kept his hair long to hide this defect. Some part of his captive felt badly about bullying him. Even so, she had to escape somehow.

When he moved that hand, Sylvia bolted for the streetcar. It had just arrived while Horace waylaid her. As it pulled away, she jumped onto it. Thank the Lord for freer movement through rational dress.

In the image above, I can see the beginnings of the modern bra. That was still years in the future, though. The Liberty Bodice did not catch on as "all the rage" among women. The corset remained a necessary garment for the rest of the nineteenth century.

But here is some very strange irony. The garment for men that the Rational Dress Movement promoted DID become extremely popular. The one-piece wool union suit or long johns was introduced by this group. Men took to them like hogs to slop.

Go figure! Does this show the male dominance of the century as they could adapt to the group's ideas but women couldn't? I expect that would be for socialogists to debate. 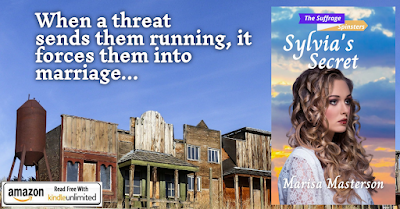 Sylvia wants to be free to make her own choices. Ernest hopes she’ll choose him. When a threat sends them running, it forces them into marrying. Will love follow?

Sylvia makes up her mind to no longer be the "good daughter". Not when Chinese children couldn’t attend school. Besides, she's nearly thirty-years-old, already a spinster! She was old enough to make decisions.

Her secret teaching leads her into danger. That danger sends her running for safety. Dodging into a hall to escape her pursuer, she finds that safety at a suffragette meeting.

What an odd place to fall instantly in love! Who would expect to meet a handsome man in a women’s rally?

A quick marriage and threats to her new husband’s life make Sylvia realize that some secrets have to come out into the open.

If you enjoy sweet romance with a historical flavor, then sink into a chair and start reading Sylvia's Secret.