Look what our authors published in December! 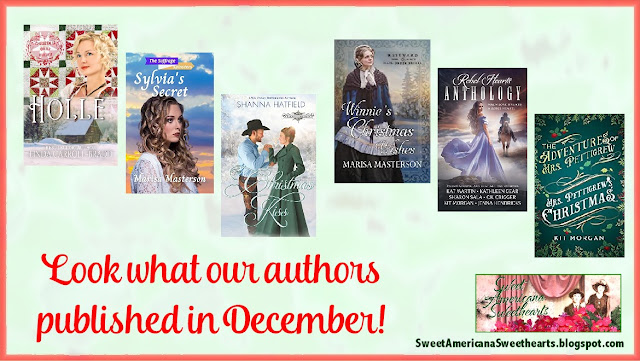 It's a new year, and also a great time to look over those books published the last month of last year. You won't want to miss reading a single one!

Here is what we published in December, 2022

In Holle Lambrecht's experience, love is a curse. She's been engaged twice but remains unmarried. Her first fiancé died, and the second one jilted her two days before the wedding. Then the man who paid for her train ticket to bring her to Montana as a mail-order bride rejected her because of her partial deafness. Abandoned, she must find a job and settles in a working-class neighborhood just like the one she hoped to escape.

Widower Eduard Lambrecht discovers his late wife's Christmas quilt suffered in storage since the last season. He takes it to a seamstress shop, where he learns the woman with the skills to repair it is also the mail-order bride his cousin rejected. Unaccustomed to facing open hostility, he works to gain the woman's trust. A near tragedy draws them close, but is it enough to base a future on?

He’s a devoted single dad still grieving the loss of his wife.

She’s an outrageously fun female with a temper that runs as hot as a teakettle.

Will the two of them find a way to work together to give his son a Merry Christmas?

When Gracy Randall returns to Hardman after almost six years away, she can’t wait to see the look of surprise on her parents’ faces. But the surprises are for her, it seems, as everything she thought she could depend on turns out to be different than she expected. The family ranch? Sold. The fabulous job she lined up for her return? Gone. The life she left behind? Memories. Now what will she do?

Cord Granger has problems of his own. The ranch he bought to make a fresh start requires far more work and time than he’d anticipated. Until he can find someone to take care of the house and his son, Bodie, he struggles to keep up with each day’s demands. Yet, the thought of letting another woman into his home, even if she is hired to be there, feels like dishonoring the memory of his wife. But he has to do something. The work? Piling up. The grief he faces every day? Staggering. The life he left behind? Memories. Who can he trust to help?

After landing on the wrong foot the moment they meet, the last thing Gracy and Cord want to admit is that the other may hold the answer to their problems. Can a little holiday hope help Gracy bring fun and joy back into Cord’s world? Will Cord’s return to the land of the living break the heart she locked up six years ago?

Find out in The Christmas Kiss, a sweet historical holiday romance brimming with the wonder of the season, a town full of humorous characters, and heartwarming story of love.

Winnie Simpson knows why people like her. She works hard and tries to make all their wishes come true. She's determined to do the same for her husband when she travels to be a mail order bride.

Surprisingly, her new family doesn't appreciate what she does. Her husband only smiles kindly and nods after each meal. His son does the same whenever she does something for them. Impersonal and polite. And the daughter is a terror.

Winnie is sure that giving them the perfect Christmas will win their love. This Christmas, Winnie will receive the gift of understanding the real love.

From the last stand at the Alamo to the events of today, it’s apparent that even the most notorious of rebels are capable of love…

It’s been said that the love of a woman can make the man. But what if that man is a rebel—an outlaw? When love is on the line, can a desperado truly change and be the man that every good woman wants and needs?

Six best-selling and award-winning authors have tackled this challenge. Join along as romantics everywhere dive into this whirlwind anthology in search of an answer to the question plaguing their hearts… What will it take for a rebel to change his ways?

After losing her assistant Fantine to marriage, Adelia Pettigrew is not only still lamenting the fact, but bored to tears. How can she make a match when she has no joy? And who is going to be her new assistant? Maybe if she left town for a while, that would lift her spirits. A trip to London perhaps? Her mind made up she begins to make the arrangements. That is until Tobias Lundstrom shows up on her doorstep. Fantine pined after him for years and everyone thought he married. Come to find out that's not the case. Jilted at the alter, he's despondent and isn't sure what to do. Miffed he never batted an eye Fantine's way, should she help him? It would give her something to do. And isn't the Johnson's granddaughter coming to visit her grandparents for the holidays? Problem was, Mattie Johnson, a New York socialite, wasn't going to give Tobias the time of day. As the son of a butcher, he was nothing to her. Unless Adelia and her staff made him into something more ...

Enjoy this hilarious sweet historical romance as Mrs. Pettigrew along with her illustrious staff try to turn Tobias Lundstrom into a gentleman even an heiress can't refuse.

Sylvia makes up her mind to no longer be the "good daughter". Not when it involves something as important as having the right to vote. Besides that, she's nearly thirty-years-old--definitely a spinster!
Seconds and third thoughts have her looking for a way to both protest and still seem like the good daughter. Her disguise is perfect. At least until one man sees past it during a protest march.
How far will Washington Frasier take his blackmail? All the way to the altar?

If you enjoy sweet romance with a historical flavor, then sink into a chair and start reading.Sylvia's Secret.

Not all of our authors make their books available on pre-order. However, for those who do, those advance sales go a long way toward boosting their sales rankings. Here are future releases:

Lauren Traylor is traveling to Rawlins, Wyoming to marry a sheep rancher she met through an advertisement. Much to her dismay, a thief snatches her reticule and runs off with her tickets and most of her money. What she still has tucked away on her person is not enough to buy a replacement ticket. She is offered a way to earn her fare plus extra funds, but it means she must delay meeting her intended.

Jeb Carter, Union Pacific Special Agent, is sent to Laramie, Wyoming, to discover who is behind a string of train robberies. He plans to work solo—he always works solo—but his boss has other ideas. He comes upon a hapless damsel in distress stuck at the Omaha Union Depot. Much to his dismay, he soon receives orders to escort her to a crossroads town on the train line. There, she will work for a busy restaurant while gathering information. He is to be her contact.

Lauren encounters an unforeseen development. Jeb joins a posse search that ends in tragedy. In the process of searching for train robbers, will they be robbed of their futures?

She fell in love with an ideal. Too bad the man that she meets is so different.

Jack Dixon knew his mother was right. It was time he married. He'd go along with whatever she writes in her letter to the matchmaker.

Priscilla Pringle fell in love with the man who wrote such a tender letter. Too bad that when she meets the man in Missouri, he is the complete opposite. She'd leave and return immediately. But what would happen to the orphaned piglet she is bottle feeding?

Will she stay after the piggy is weaned? Is Jack the only one who needs to change to make their marriage work?

Desperate to reach the United States, Elise Meyer is offered passage in exchange for working seven years as a nanny. Once she arrives in New York, the wife of her German sponsor decides to work her in the kitchen of their family restaurant instead. She soon realized the husband does not have honorable intentions toward her. One night when he touches her inappropriately, she grabs a knife and fights back. Realizing he is seriously injured, she runs to her small room off the kitchen, snatches up her meager belongings, and flees.

Kurt Neumann recently finished his eleven-year enlistment and is relieved to see the last of the U.S. Army. While he was in, although he fought when needed, he spent most of his time cooking for the troops. Having saved most of his earnings, he is now in limbo while he decides what to do with his future. He meets a pretty German woman who speaks limited English. The German he learned from his grandmother is limited, but enough he can communicate. Once they realize a detective is after Elise, intent on taking her back to answer for her crime, Kurt must make a decision. Will he avoid complications by walking away, or will he help her escape?

A Match for Gabe (The Matchmaker, Agatha Returns, Book 8)

A harsh, scar-faced, rancher, An impulsive, whimsical teacher go together like dandelions and daydreams. Well, she thinks so anyway…

Callie Ann Dixon’s impulsive nature has cost her a teaching position. Destitute, she agrees to seek the help of a matchmaker. She believes there’s a happily ever after within reach for everyone, and she’ll work hard to make her dream come true. Casting her past failures aside, she’s thrilled with the idea of moving west and requests a match with someone who embraces adventure and will be enthusiastic about building a romantic relationship.

Gabe Russell, former solider and regimented rancher, isn’t looking for love. Instead, he needs a cook, housekeeper, and babysitter for his four younger siblings. Hence, his request to the matchmaker includes, “My desired match should be a no-nonsense, hard-working woman who knows the importance of following a schedule.

She was branded as a traitor to the Union.
He was her sworn enemy.
A marriage of convenience would be perilous…wouldn’t it?

In the summer of 1864 in Roswell, Georgia, war widow Sofie Bishop struggles to manage the small family vineyard on her own. The War Between the States took her husband and her way of life. Now, with the taxes due, she’s about to lose her home. Her only option? Finding work at the Ivy Woolen Mill.
Her woes only continue to worsen when the Yankees arrive on Roswell’s doorstep and destroy the mill. Branded as a “traitor” for making fabric for Confederate uniforms, she is arrested and transported north with the women and children who worked in the mill.

Captain Seth Ramsey, a dashing, surprisingly courteous officer and a gentleman, is not what Sofie expects from a Union soldier. Despite her misgivings of falling for the enemy, she finds herself drawn to the handsome officer.

She didn’t think she could lose much more to the Yankees.
But she was wrong.