Although Thanksgiving has been celebrated in America in some form or another since the first day of giving thanks at Plymouth Plantation in October, 1621, the holiday didn't become an annual tradition in this country until 1863. 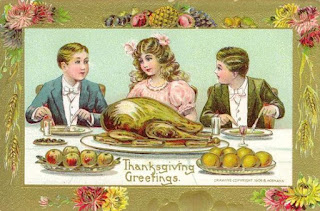 While the Thanksgiving turkey is a nod to the early Pilgrims and settlers who relied on wild turkey among other fowls found in the New World, cooks during the Victorian era became more creative. Instead of using ingredients like stale bread and corn meal, turkeys might be stuffed with chestnuts, cranberries, oysters or various fruits, and tended to vary depending upon what was locally fresh and available.
In early America there were taverns, inns, and boarding houses that offered supper, but there were no restaurants. Delmonico's, the first American restaurant, opened in 1831 in New York City. Along with a growing population, the number of restaurants grew with the patrons exclusively male! 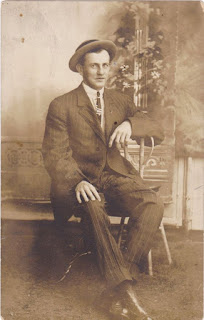 Soon, from the Waldorf-Astoria in New York to the Palmer House in Chicago, fine dining was the rage for the affluent, socially elite.
After the Civil War--with the expansion of the railroads and settlers moving westward--the number of restaurants expanded from north to south, east to west.  Though some restaurants served Thanksgiving dinner--mostly to lonely bachelors--the holiday was still a "home" occasion.
By the 1880s, women had begun to join their husbands and brothers at restaurants--no lady would be caught dining out unless she had a male escort. Consequently, Thanksgiving dinner at restaurants soon became acceptable, if not attractive. 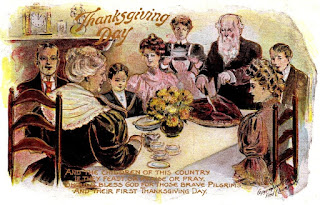 During America's gilded age (1890s - World War I), many restaurants were in grand new "palace" hotels. This was a time of over-abundance with an amazing volume of food prepared for the Thanksgiving menu. 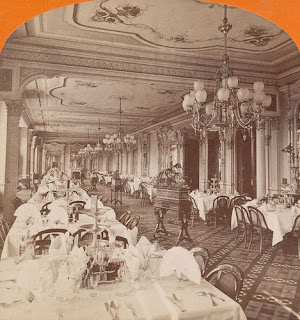 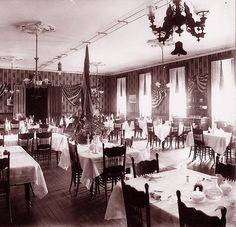 Hotels in Kansas City, Missouri, outdid themselves in 1888. Items on the Thanksgiving menu included Blue Point oysters, little neck clams, calf's brains, buffalo tongue, red snapper, salmon, turkey, duck, squirrel, asparagus, artichokes, puddings, pies, ice cream, macaroons, and a host of imported cheeses.
Menus, whether written on wooden planks with pieces of coal or on slates with chalk, or later, on paper, were the earliest bills of fare telling patrons what foods were offered for that particular day as well as prices. For special occasions, such as Thanksgiving, hotels designed fancy menus, using wonderful colors and images. 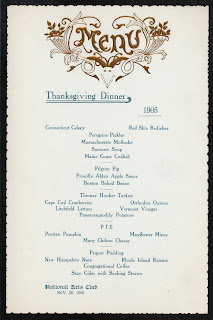 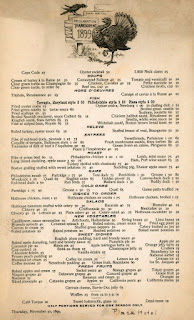 Menu's could be fringed, embossed or textured. Using silk ribbons, many showed great imagination and originality in terms of layout, illustrations and typeface. 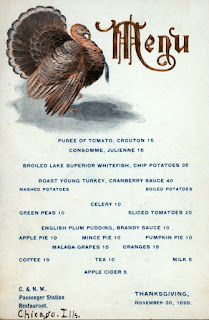 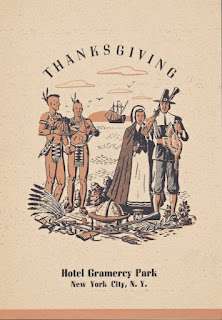 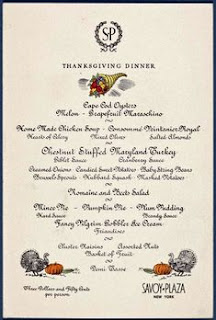 In the early 20th century, the growing female workforce and the scarcity of household help led to foods that were practical and easy for everyday consumption, and especially for the holidays.
The 1925 Thanksgiving Day menu from the Hotel Brunswick..."the fare was "all American," from grapefruit with maraschino through pumpkin pie and sweet cider. The entrees were turkey, goose and scallops."
Fine dining, fueled by wine and liquor, met its demise by Prohibition. While Delmonico's closed, other restaurants housed inside hotels survived because its guests needed to be fed.
Soon, a new type of restaurant--the family restaurant--appeared in the 1930s. They served basic, simple wholesome "American" food. A 1935 Thanksgiving Day menu from the Governor Clinton Hotel featured..."for $2 patrons could feast on celery, American cheese with saltines, and condiments. Entrees were turkey, ham, and crab Newburgh."
Following World War II, refugees from war-torn Europe opened restaurants, featuring ethnic cuisine on Thanksgiving menus. Ethnic restaurants were not a new phenomenon in America. German immigrants came in 1850s, followed by the Chinese in 1870s, the Italians in 1880s, the Russians in the 1920s, and the Mexicans in the 1950s.
Today, falafel, chicken shawarma, stuffed grape leaves, pho, and lasagna are just as likely to be featured on Thanksgiving Day menus as turkey, stuffing, and pumpkin pie.
Whether you rise early on Thanksgiving morning to pop that bird in the oven, cook the side dishes, and set the table for four, eight, or twelve or sleep in, watch the parade, then meet family and friends at a restaurant for a holiday feast, from our home to yours,
Happy Thanksgiving! 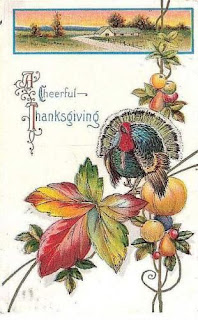