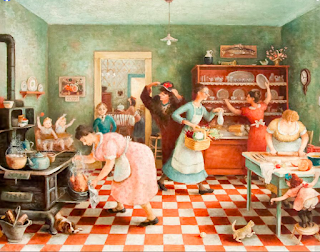 Pioneers, after finishing the Oregon Trail with all its dangers, had good reason to celebrate Thanksgiving. They survived bad weather, sick animals, attacks on the wagon train and all manner of mishaps. Is it any wonder they were thankful?

A few years back, I had the pleasure of working on a multi-author project called Thanksgiving Books and Blessings. Some of you may have heard of it. Some may have read a few if not all of the books in the series. It was a lot of fun to do as it gave me a chance to write a prequel story to my Prairie Bride and Prairie Groom series. Both center around a tiny town in the eastern part of Oregon called Clear Creek (named for the creek I live next to in real life). In those two series, the main family of the books, the Cookes, talk about their journey west now and then, and their mother, whom they loved early. They're a British family, you see, and the father wanted to leave England, come to America, and raise cattle. Unfortunately he died before they could leave Missouri, leaving his wife and sons behind. Problem was, back then a woman had to be married if she wanted to join a wagon train, and so, she sets out to see it down just to fulfill her late husband's dream of starting a cattle ranch. 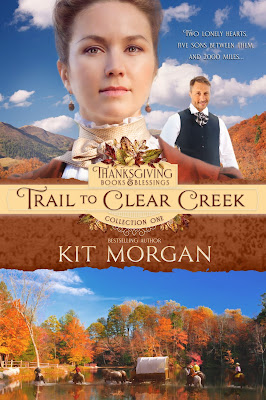 So, I got a chance to write this story and was glad I did. Though most of it takes place before Thanksgiving, my characters were mighty thankful when they celebrated their first in a new land. For my British characters, it was also a new holiday, but one they've enjoyed ever since.

Holidays can inspire all kinds of stories for writers. Each story in the Thanksgiving Books and Blessings series has, of course, Thanksgiving in there somewhere. Each author used the holiday differently. And, I must say, I'm also glad I did the series because not much is written about Thanksgiving in the old west. Christmas gets all the attention, but then, who doesn't love a good Christmas story be it historical or contemporary?

What kind of holiday stories do you like best? I do love Christmas, but am beginning to like Thanksgiving a lot too.