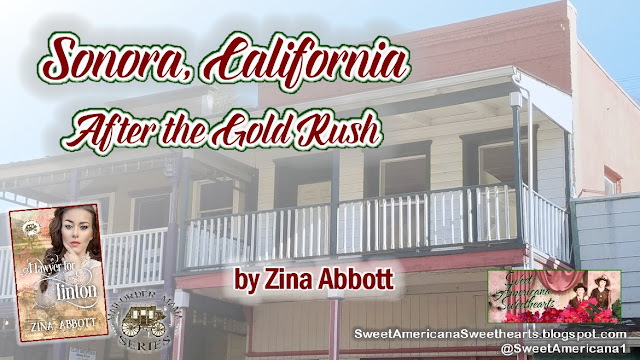 Sonora was an early California gold rush town, and one of the early cities incorporated in the state. It had a wild and uncivilized start, but quickly developed into a regional commerce center.

Here are some 19th century highlights of early Sonora from about 1860 on:

In 1864, the Sonora Pass passing through the city was opened. It was a toll road that connected the San Joaquin Valley to the west and the foothill communities around Sonora to the communities of eastern California in Mono County. It is now known as State Highway 108.

In 1884, hydraulic mining was outlawed due to the debris (tailings) which filled the river. That form of mining ended in Sonora, but was soon replaced with hard rock mining.

By 1885, the time period in which my book, A Lawyer for Linton is set, Sonora was well established and in need of a large community facility that could be used for various types of entertainment. Citizens had always shown an appreciation for local and traveling entertainment troupes and other community events. The Sonora Opera Hall was the answer to this need.

James G. Divoll and Joseph Bray originally built the Star Flouring Mill on the site. They had made their fortune from the Bonanza Mine, which was located just north of the “Red Church.”

In August 1885, the flour mill burned under suspicious circumstances. Many believed that robbers had broken into the mill thinking gold from the Bonanza Mine was stored there.


After the fire, Divoll and Bray immediately set to using the surviving walls of the flour mill for the Opera Hall. Just three months later, on Christmas Eve 1885, the Opera Hall opened with its first event, a roller skating party. The Opera Hall was active as a community center only until 1896, when the owners decided it was no longer financially viable. After 1896 there were many uses of the building, the longest being the Opera Hall Garage which closed its doors in 1979. The City acquired the Opera Hall in 1985, and through several historic preservation grants and civic contributions, the City was able to restore the building as an elegant community and entertainment center.
Before and after the Civil War, the area suffered a depression. With the placer gold pretty much mined out of the area, Sonora, along with the rest of Tuolumne County experienced a large decrease in population. However, on or around January of 1870, marked by the incorporation of the Guild Mining Company, the area began what is known as Sonora’s second gold rush. Lode mining became important and the city remained the trade hub for the new hard-rock camps. Agriculture and timber operations also contributed to the lasting prosperity of the city.

Lumber had always been an important industry for Tuolumne County and Sonora. At first, the primary use of the lumber was for mining needs. Then, as homes and businesses were built up, the need for lumber grew. Wood was transported by rivers and channels using water flumes. Also, horse and mule-drawn lumber wagons hauled much of the lumber. The market stayed fairly local for years due to the lack of a railroad to cost–effectively transport lumber far beyond the county. However, with the coming of the railroad, markets for lumber in the mountains surrounding Sonora increased.

In other respects, because the city was remote from the larger population centers in California, some amenities came to Sonora later than they did to other parts of California. The city did not receive electricity until 1982. The railroad—Sierra Railway—did not arrive until 1899. It first paved its roads in 1922. In 1899, a beautiful courthouse was built to replace the former 1853 courthouse, and began service in 1900. It is still in use today.

In spite of that, Sonora became a town that continued to survive and move forward with the rise of mining and lumber into the 20th century.

I greatly enjoyed writing A Lawyer for Linton and setting it in a city I have enjoyed visiting several times. This book is currently available by CLICKING HERE.