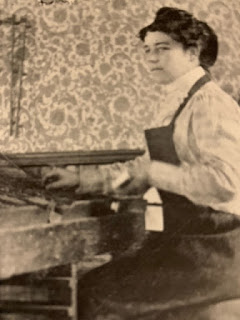 Hi! Kit Morgan here and today I want to talk about Printers in Petticoats!

Back in the day, frontier newspaper men quickly determined that "the hand that rocked the cradle" could also justify a line, ink a form and, if necessary, pull an impression on a Washington or a Ramage.

Many wives worked along side their exhausted husbands to help him meet the weekly deadline. Over time a few widows even assumed control of the newspapers and print shops their husband's owned. In some instances, the husbands died because of his print shop!

At first women weren't a part of frontier journalism anymore than they were the lumberjacks or railroad construction crews. But over time and a number of permanent settles established families and new ones formed, there were more ladies available to help in journalistic endeavors. They were good at it too. 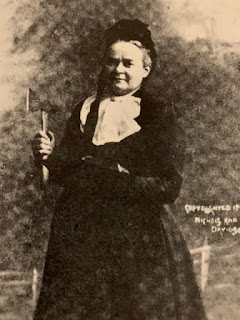 For one, thee was a great deal of dexterity involved in picking the tiny lead characters out of a California job case, as they were called. Women not only could hold their own in this department, but often they delivered more ems per hour then a male type-slinger. A good dependable female compositor was cheaper than an internet "tramp" and she was less likely to hide a bottle behind the furniture cabinet.

In the 1880s women started to emerge from the lowly beginning and some even published their own newspapers. Carrie Nation of Medicine Lodge, a nemesis of Kansas saloon keepers, was one such woman. She greeted readers of her anti-booze newspaper with a borrowed slogan: Peace on Earth, Good Will to Men. And she meant to attain that peace if she had to whack up half of Kansas with her trust hatchet! Sounds just like Mrs. Dunnigan, a character of mine in my fictional town of Clear Creek!

Needless to say, the clarion call of prohibition and women's suffrage was instrumental in attracting many female do-gooders into the field of journalism where they could use the power of the press in their causes.

Until next time, happy reading!