It always amazes me the things I learn when I'm doing research for a book. Recently, I was virtually thumbing through an old newspaper from 1884 and happened upon an article about the Washington Monument finally nearing completion after fifty years.
Fifty years!
I had no idea it had taken that long, and decided, just for my own curiosity, to dig deeper into the details. 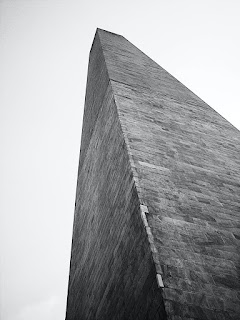 The idea for a monument to honor George Washington was kicked around before he even became president. In 1783, the Continental Congress voted to build a statue of Washington. Once Washington became president, he discarded ideas for a monument since funds were tight and he thought there were better uses of federal funds. After he passed away, Congress again brought up the idea of a monument, but nothing came of it.
Finally, in the 1830s, a group of Washington residents banned together and formed the Washington National Monument Society to raise private funds for the project. The group, headed by Chief Justice John Marshall, held design competition. The winning architect was Robert Mills, whose credits include the U.S. Treasury Building and the U.S. Patent Office, currently home to the National Portrait Gallery and the Smithsonian American Art Museum.
Mills' design called for a temple-like building with thirty stone columns and statues of Revolutionary War heroes. The plan was for a statue of Washington driving a chariot to reside above the main entrance with a 600-foot-tall Egyptian obelisk rising from the center of the building.
The monument's cornerstone (embedded with a box that held items such as a portrait of George Washington, newspapers of the day. U.S. coins, and a copy of the Constitution) was placed in a ceremony attended by thousands of people. Construction began, but in 1854, with the structure only 150 feet high, funds ran low and work stopped. An activities group called the Know Nothings became angry Pope Pius IX had donated a block of stone from the ancient Roman Temple of Concord for the monument. They confiscated the stone, seized possession of the monument, and later disbanded, leaving the construction on hold. Then the Civil War began.
In 1876, in celebration of America's 100th birthday, President Ulysses Grant authorized federal funding to finish the monument. Work resumed in 1879. By this time, the plans were outdated, and the obelisk was removed from the plans. An additional issue was after two decades of no work being completed on the monument, matching quarry stone couldn't be found. As a result, the bottom 150 feet of the monument is a different color than the top. 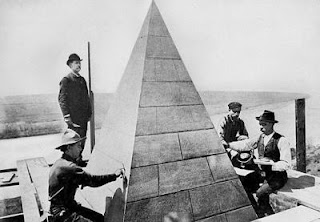 Construction wrapped up in 1884. The capstone, which weighed more than 3,000 pounds, was set in place on December 6, 1884.  The projects was dedicated the following year, but didn't open to the public until 1888. 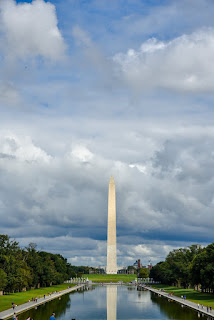 The finished monument stood 555 feet and 5 1/8 inches high, had 50 flights of stairs, and weighed more than 81,000 tons. It was the world's tallest man-made structure until the Eiffel Tower was completed in 1889.
It's so fun to stumble across interesting historical details, especially when I can work them into a story.

Posted by Shanna Hatfield at 1:30 AM