An Invention with Huge Impact—the Typewriter

In our modern age, we don’t spend much time thinking of how our lives are impacted by inventions--these days we call it new technology. In fact, some of us expect it and willingly buy the next phone upgrade. Not me—I hang onto stuff until the company no longer provides tech support and then even longer, as long as it’s still working. Case in point, I’m writing this post using a Word 2007 program.

But imagine how the lives of office workers changed following the invention and commercial production of the typewriter. Prior to the mid 1870s or early 1880s, all reports within a company were handwritten. So if you have clear and precise penmanship, your skill was prized and ensured your employment.

The first patent for a Machine for Transcribing Letters was issued in 1714 to inventor Henry Mill, but no evidence the machine was ever produced commercially exists.

For the next one hundred and fifty years, many attempts were made to develop a typing machine, most with the keys arranged like those on a piano. But no invention proved successful enough to develop it commercially.

In Denmark in 1865, Rev. Mailing-Hansen invented a writing ball. The keys on top pushed a short piston with the capital letter on the end down onto the paper below.

In 1868 a patent was issued to American Christopher Latham Sholes for a machine that produced capital letters only. Sholes worked with Carlos Glidden, Samuel Soule, and Frank Haven Hall. This machine was taller than it was wide, had individual keys that lifted metal bars with the letter engraved on the end to hit a ribbon that pressed against paper held by a platen. But a consistent problem was the keys jammed. The machine proved unwieldy and Sholes sold the patent. Another inventor, James Densmore, played around with the key placement to arrange them so frequent letter combinations would not jam the keys near the platen. Voila--the invention of the QWERTY keyboard that is still in use today. 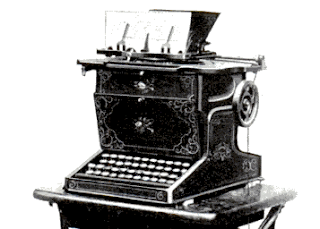 Densmore contacted the Remington Arms Company (yes, the company who made guns) for assistance in manufacturing the machine improved from Sholes’ design and called it the Sholes-Glidden Type-writer. Commercial production started early in 1873. 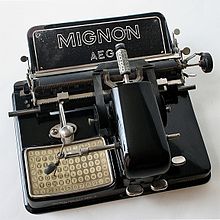 The next innovation was called an index typewriter which used a stylus to choose a letter from an index. The letter would then be printed to paper by pulling a lever. These machines were simpler in their construction, lighter in weight, and were advertised for use by travelers. Another advantage was the ability to change the font style, a feature standard typewriters did not have.

By 1910, the typewriter was being produced by several manufacturers with only minor differences between the models.

The biggest advantage this machine brought to American society, where the main function was to transcribe handwritten material, was the ability for women to enter the workforce in large numbers. 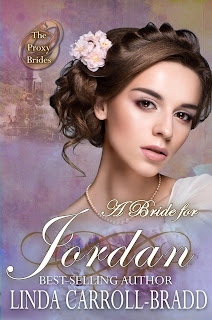 My latest release, A Bride for Jordan, features one of those women with the ability to take shorthand and transcribe the notes via a typewriter.

BLURB: With a book deadline hanging over his head, Wyoming veterinarian Jordan Vardon needs a stenographer…fast. Tired of living where women have no legal rights, Senta Volney jumps at the chance to use her shorthand and typing skills to help a Wyoming man write a book. A marriage-of-convenience is essential for propriety’s sake. Can city girl Senta adapt to the country life? Will Jordan have the heart to end their in-name-only arrangement?

I started my work career as a typist. I still own the Smith-Corona electric typewriter I bought for my first year in college, and I use it once a year for certain government forms. How many of you have experience with typewriters?

Posted by Linda Carroll-Bradd at 11:24 AM

Email ThisBlogThis!Share to TwitterShare to FacebookShare to Pinterest
Labels: #historicalromance, #sweetromance, fish out of water trope, marriage of convenience, veterinarian