From Southern Belle to Cattle Queen and Then Some...

More than a decade ago, I read A Bride Goes West, the memoirs of Wyoming wife and rancher Nannie Alderson. The book haunts me to this day. You’d have to read it to understand, but Nannie was a fire-cracker with a rebel’s heart! Nothing ever kept her down; she accepted life with grace and grit and lived a grand adventure when the west was still wild and wooly. 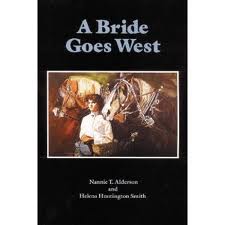 Born to an affluent southern family, Nannie grew up in post-Civil War Virginia. Her home and community were spared much of the desolation of war, leaving her to blossom in a world that clung to the most genteel Southern graces. Her petticoats were ironed daily, she never cooked a meal or did her own laundry, but she did learn the most useless graces of high society. Her mother was a vain woman who enjoyed being the belle of the ball and was pleased to groom her daughter for the same fate.
Nannie only felt strangled by the shallow, societal confinements.
In 1880, she had the opportunity to visit a cousin in wild-and-wooly Kansas. Nannie jumped at it. Right from the start, she fell in love with the freedom of the West. No one judged her there; no one treated her like a hot-house flower. What you wore or who you ate dinner with didn’t impress anyone. Folks were measured by their grit, not their silk breeches. Hard work and honest words were all that mattered.
While there, she met the man who epitomized these traits. Walt Alderson had left home at the age of 12 to make his way as a cowboy. He spent years learning to be the best cowboy he could be with the ultimate goal of running his own spread. In all that time, he never made one visit home.
He and his business partner had purchased some land in Montana and started the work of building a ranch. For whatever reason, Walt decided in the midst of all this to check in on his family. The night he came home, Nannie was sitting on his living room settee.
Nannie’s recollections of building a ranch in the wilds of Montana with Walt are fascinating, detailed, peppered with humor, and always honest. She went from gliding across hardwood floors to sweeping dirt floors covered with canvas. She went from living in an antebellum mansion to a drafty, two-room cabin. She went from swirling about at parties with young men in perfectly tailored suits to dancing with dusty cowboys in patched up dungarees.
She had to learn to cook and her tutors were those trail-hardened ranch hands who treated her like a princess and readily forgave her for the rocks she called biscuits. She survived bed bugs and blizzards; delivered children with no midwife and stared down Indians. Nannie even shot a rattlesnake who attempted to take up residence in her kitchen. She readily admits she had moments when she felt sorry for herself, but, mostly, Nannie counted her blessings. She loved her life. She loved the way of life out West.
Like Walt, quitting was never part of the plan, even when the stock market crashed and Indians burned their house. For ten years they worked and slaved to forge a home from the beautiful, desolate, wide-open country in Montana.  Even when Walt died, leaving her a widow with two young children, Nannie cowboyed up. She made ends meet; she raised good kids.
The next time your microwave goes on the fritz or you forget to pick up milk at the store, pick up a copy of A Bride Goes West. I guarantee this gritty pioneer gal will put things in perspective for you. If you enjoyed this post, I hope you'll consider signing up for my newsletter. In return, you'll get a free copy of my "sampler"--the openings to several of my books.

So, what do you think? Have we gone soft? Do Americans face up to things the way our ancestors did?

Posted by Heather Blanton at 9:00 AM