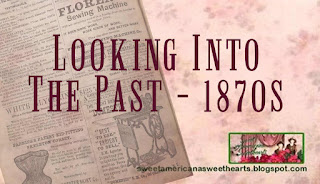 Recently someone mentioned that fans of Western Romance don't really care about history, clothing, life, etc. I thought the statement itself was myopic. Why judge an entire group of people with one dismissive comment?

Now, I'm not saying to love fiction about the Old West that you have to know anything or everything about life in those days, but I believe that if you have a warm feeling/interest for a time period there has to be something that interests you about the period.

I have bit of an interest in the American West. If you want to see how much, come to the Hawaii Friends of the Library Book Sale in the summers and stand back near the history tables. No, really... STAND BAD. I don't want to hurt you.

I have an extensive and eclectic collection of books... part of the fun of writing about the period is that I get to mine these books for information!

Lately, I'll reach into a box (and there are MANY) and just start to read whatever I touch first... So today's gem is my 1872 Peterson's Magazine bound edition. If you've seen many or any Civil War era films, you'll be familiar with the BELL-like shape of Antebellum Dresses... they're beautiful, but crazy to wear. Until you've had to squeeze through a modern day doorway with a hoop skirt on, you haven't lived. 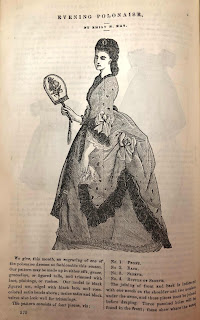 When I was in the Nutcracker for eight ears in school, I spent two years as a Mother in the party Scene. I loved that role. We wore the pretty dresses and had the opportunity to wear jewelry on stage... those were the days lol. .but in the 1872, the big ol' circle skirts with rows of boning/wire began to shift. Less wide side to side, the majority of the shape was now 'behind us' - and the back of the skirt rose, heading to the direction of a slightly later in the 1800s bustle...

In this photo, taken from the magazine, you'll see the rising 'bump' in the back... the next page in the Magazine are the pieces of the pattern drawn as outlines and placed over each other...
You want to know what MATH is good for in real life?

Try to take one of these patterns and draft them full size to actually make the garment. Time to break out the yardstick and pattern paper! 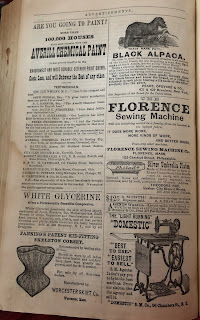 Another page I wanted to share with you was one of the page with Advertisements on it. Not only do they advertise Silver Umbrella Plates - little metal tags that you can personalize the handle of your umbrella so folks will be able to tell yours apart from theirs.

They also have an advertisement for Fanning's Patent Skeleton Corset. Goodness! It's the 1872 version of Victoria's Secret!

And for anyone who has seen the movie "The Greatest Showman" starring Hugh Jackman... the PAINT advertisement shows a recommendation from the man himself! (PT, not Hugh, sorry)
and Peter Henderson, Esq. "I find the Chemical Paint retains the colors and gloss far superior to that done by the lead and oil at the same time."

Well, we all know how great LEAD paint is... so here's hoping the 'chemicals' in the Chemical Paint weren't dangerous!

What are the kinds of things that you were interested in learning about the Old West when you read a book set in that era?