What do Frontier Physicians, Doctors in the Wild West and Hero Hearts have in common?

I love history, researching history, and embellishing upon history in the historical romance books I write (they are fiction, after all). I also love heroes—strong, loyal, good men, and strong, kind, intelligent women.

Some of you know that I co-write a series with two additional authors, and the series (Hero Hearts) focuses on heroes in the past and present.

My latest historical, Lawfully Charmed, is a story created in the fictional town of Bareglen Creek, Texas and features a sheriff, a socialite, a Texas Ranger, a Native American, multiple deputies, and two physicians. There's lots of action, danger, and chemistry, and the book (although standalone and sweet) sets up a series of books for Bareglen Creek.

Both physicians will have their own books releasing in the near future, and Doc Holloway's will be next, scheduled to release within three weeks. His book is titled "Reluctantly Charmed".

Claire, the heroine from Lawfully Charmed is a natural-born matchmaker, and she's at it again. She thinks her best friend Magdalena is the perfect match for Doc Holloway. Doc ends up thinking so, too, but Magdalena... not so much. 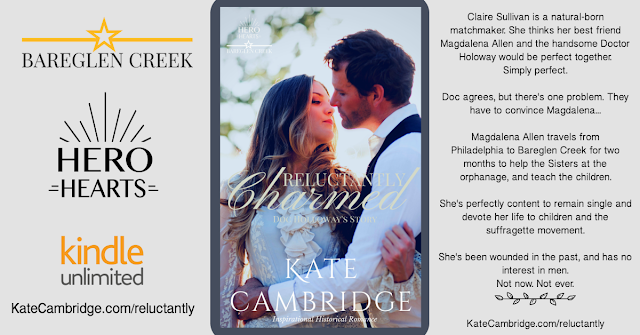 She's been wounded in the past, is a suffragette, and has no intention of giving up her independence, or getting married. Not now. Not ever! Thus the title Reluctantly Charmed! : )

While researching these books, I found it fascinating that doctors in the wild west (the mid to late 1800's) often wore many hats, and in some cases were asked to act as the sheriff for their town if the town was small!

As an educated member of smaller towns, doctors were often asked to head the schools, act as the justice of the peace, the local druggist, and more.

Frontier doctors often carried a bag with them that contained medicines, botanicals, and instruments used for diagnosis and treatment.

There were many challenges and dangers that went along with the position of being a physician in the wild west, and often doctors had to make due with local remedies while they waited for supplies to arrive by wagon train or locomotive. Traveling to the sick and wounded included its own set of danger, and frontier doctors were long on endurance and courage—but often short on everything else.

Although some doctors chose to carry a firearm, many did not, and in fact, Dr. Charles Buck, who traveled through the Rio Grande Valley of Texas refused armed escort from the Texas Rangers. He told them that they had many enemies, but he did not, and therefore felt safer without them!

Doctors were (and are) true heroes. In Pioneer days, they often sacrificed their lives to attend patients who were ill from epidemics or injured due to large-scale mining accidents, or robberies.

In the early to mid-1800's, many doctors did not have a medical degree but rather were self-proclaimed. Those were dangerous days, even when the 'doctor' had the best of intentions.

Texas was the first state to establish a licensing board for physicians, and by 1895, most states had followed suit.

The twentieth century made the practice of medicine far more sophisticated and advanced, for the benefit of all.

The doctors in this Hero Hearts/Bareglen Creek series are both educated, serious about their profession, more than a bit intense, and one could even say, opinionated. With that said, they both have hearts of gold, hero hearts, if you will.

If you would like to know when Doc Holloway's story, Reluctantly Charmed, releases, you can do so here:  KateCambridge.com/reluctantly

If you would like the chance to win a copy of Reluctantly Charmed, please join the Hero Hearts Reader Group on Facebook where frequent contests and giveaways occur almost weekly!

Thank you for joining me today! I would love to connect with you on Facebook, so please join the reader group, and join in with the other amazing women there.