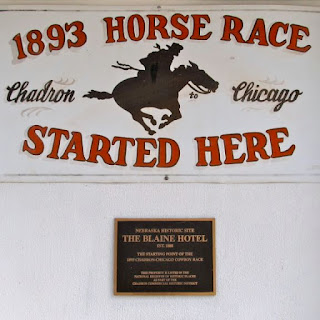 Hi! Kit Morgan here! While deciding what to write about this month, I was struck with a thought about horse racing. Now, in my family, that's nothing new. We grew up around it. My dad used to be Chief of Security for the Portland Racing Commision, and my younger sister is a professional racehorse jockey. Horse racing isn't anything new, and it's been around for centuries. But when it comes to the old west, did you know there was a race that lasted for two weeks across the rugged plains toward the Chicago World's Fair? Well, there was!

The year was 1893 and by that time the western plains were largely settled. Much of it was farmed over and fenced in to boot. The buffalo were no more, the Indian wars were pretty much done and telegraph wires had been strung up. In fact, telephone lines stretched west. A brand new century loomed just around the corner.

The race itself began as a lark, believe it or not. Initially, hundreds of hard-bitten cowboys rode into town to throw in with what was called the great cowboy race. It was the brainchild of a western newspaper man, John Maher. The race committee was helped run by a stalwart chap, Billy the Bear Iaeger.

The cowboys themselves came off the slopes of the Colorado Rockies and from the Nebraska pasture land, the Bighorn Basin and Wyoming Wilds. They had names like Texas Ben, Cowboy Giant and Yeast Powder Bill. (Yeah, I'd like to know how he got that name too!).  Oh, and let's not forget Rattlesnake Pete! 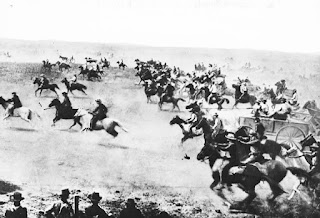 The route spanned a thousand miles (or so they reckoned) covered large swaths of the middle of the country and crossed two major rivers. The Missouri and the Mississippi. The cowboys would roar over the Nebraska Sand Hills, gallop through Iowa corn and Illinois wheat, and by then, moving much slower, crawl their way toward Chicago. 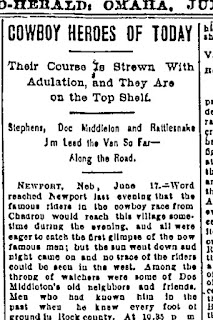 When I stumbled across this race I was thrilled. This is story fodder folks! Which means, I'm gonna have myself a cowboy or some other character having something to do with this historic event. It's just too good to pass up!

If you'd like to find out about my books, you can check them out here  Until next time! Happy Trails!