From Ghost Town to Holiday Romance

When I embarked on the adventure of writing my first sweet Victorian holiday romance, I debated using a real town for the setting or making one up. I knew I wanted the story to take place in Eastern Oregon, but where?

I came across information about a ghost town named Hardman that had once been a stop along the stage route. My curiosity led me to discover that Hardman, Oregon, once boasted several churches, a newspaper office and skating rink, along with a variety of other businesses. The school was located on one end of town.

As my imagination began to create the town in my head, my fingers began typing out the first story in the Hardman Holidays series - The Christmas Bargain. Today, there are a handful of dilapidated old buildings in town, but the bones of those old structures help me picture what the town once looked like, back when it was a bustling town.

A few months ago, I decided it was time to update the covers for all the books in the series. 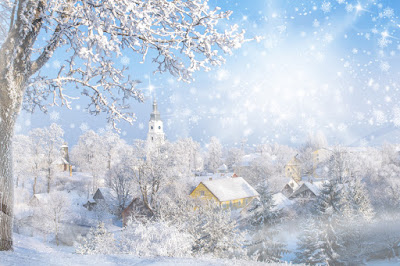 The moment I saw this graphic, I knew it would be perfect for the covers. This is exactly how Hardman looks in my head when I close my eyes and imagine it back in it's glory days when it was a busy, bustling town.

Today (only today), you can get the first book in the series free and the second book for just 99 cents. 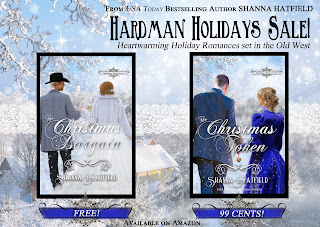 Also, I invite you to join me at a party I'm hosting on Facebook today. You'll be among the first to see the cover of the latest Hardman Holidays book - The Christmas Confection. It releases Dec. 5!
https://www.facebook.com/events/1942492956038626/

A hopeless romantic with a bit of sarcasm thrown in for good measure, Shanna Hatfield is a bestselling author of sweet romantic fiction written with a healthy dose of humor. In addition to blogging and eating too much chocolate, she is completely smitten with her husband, lovingly known as Captain Cavedweller. Shanna creates character-driven romances with realistic heroes and heroines. Her historical westerns have been described as “reminiscent of the era captured by Bonanza and The Virginian” while her contemporary works have been called “laugh-out-loud funny, and a little heart-pumping sexy without being explicit in any way.” She is a member of Western Writers of America, Women Writing the West, and Romance Writers of America. Find Shanna’s books at: Amazon | Amazon UK | Barnes & Noble | Smashwords | Apple Shanna loves to hear from readers! Follow her online: ShannaHatfield | Facebook | Pinterest | Goodreads | You Tube | Twitter
Posted by Shanna Hatfield at 1:00 AM