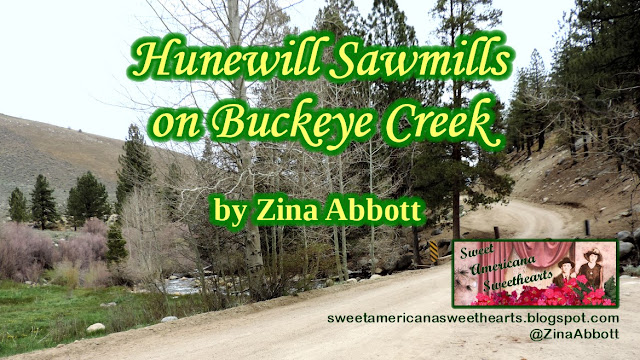 In Haunted by Love, my fourth book in the Eastern Sierra Brides 1884 series, Hazel discovers the presence of a "haint" in her room at the stagecoach inn, Leavitt House. She asks the innkeeper’s wife, Eliza Leavitt, to tell her about this specter. As part of Charlotte’s story, her husband explains why he must leave in the dead of winter to search for work as a sawyer: 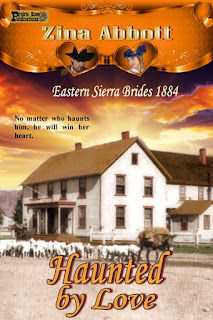 “Bodie still goes strong, and always needs milled lumber. They are even thinking of building a railroad to Bodie because the Standard and other mines in the region must look farther away to find their wood. The mill will have business even after the mines in Lundy close up. But, Charlotte, I cannot continue here as a mere wood chopper. I have more skill than that. I need to get in a position where I can make the most use of what I can do or we never will have our own home.”
Charlotte rubbed the ache in the small of her back. The expression on her face revealed she was still not convinced.
Realizing his wife’s thoughts, Swen continued, “I tried to get on with Hunewell Mill, because his mills are much closer to Bridgeport. Even if I had to live up at the mill through the week, we could have our home here in Bridgeport. But, he has all the men he needs right now. I’ll look Lundy over to see if it a good place for us until I can get on with Hunewell.” 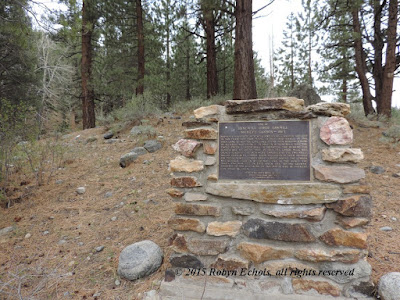 The Hunewell Mill I patterned on the Hunewill Sawmills owned by Napoleon Bonaparte Hunewill, a prominent businessman in Mono County. A trip I took along the Buckeye Creek trail almost two years ago took me to the site of the upper sawmill site. Although no buildings or other evidence of the mill remains, the following is the information from the marker:

Napoleon Bonaparte Hunewill and his wife Esther arrived in San Francisco fro Maine in 1859, and early in 1861 they came to Aurora. Late fall found them building a home at Buckeye Hot Springs. In 1862, N.B. Hunewill had the Eagle Creek Lumber Mill in operation. The demand for lumber was so great that in 1863 the upper mill was opened. Seventy-five men were employed at the two mills. Wagons piled with lumber each pulled by 16 oxen, headed for the Hunewill lumber yard in Bodie where the lumber was quickly used in residences and in the mines. The tree you now see in this area are second growth. Evidence of the log slice on the north side of Buckeye can still be seen. 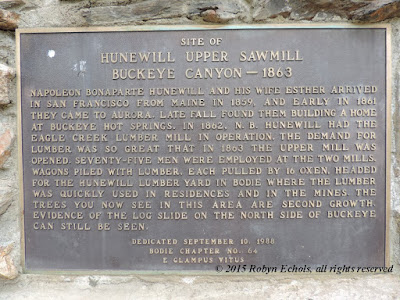 “The most urgent need of the early settlers in Big Meadows was for lumber. There was abundant timber in the surrounding mountains and several sawmills driven by steam were quickly built and put in operation. I. P. Yaney erected in the canyon a saw mill which bears his name today. The Twin Lakes mill was built by Z. B. Tinkum, and the Robinson mill by George Robinson on Robinson Creek. Two sawmills were built in Buckeye Canyon by N. B. Hunewill.

The mill and property of Roberts & Company was located in Buckeye Canyon. In 1862, the mill became the Buckeye Mill Co. which went through the hands of Berry, Towle, and finally the sole property of N. B. Hunewill. A second Sawmill in Buckeye Canyon was owned by Mayberry and Hill.

What did running a large sawmill operation entail? The following from Mrs. Cain’s book gives us some clues:

The first white women to live in what is now Bridgeport were Mrs. Vaughn and Mrs. Parsons, who were Cooks at this [upper] Hunewill sawmill.

Oxen teams were used to do the hauling and many hundred oxen could often be seen grazing in the green meadows.

In 1879 they left a contract for 8000 oxen shoes with a Reno blacksmith: 2 tons of iron. Such was the business during the Bodie boom. He will also acquired their interests in 1878 and and in 1878 built The Eagle Mill, which ran day and night and turned out 30000 feet of lumber per day and still could not meet the demand from Bodie and Bridgeport, although they ran three ox trucks of 36 oxen and employed 30 men. The manager was Jack Dennison. As many as 10 teams with 40,000 feet of lumber left the Eagle Mill for Bodie.

A major problem, trouble with Grizzlies at the corrals.

The sawmills, oxen, wagons and corrals may be gone, but I assure you the bears are still there. Several years ago I went on an overnight hunting trip to this area with my husband, although the only thing I shoot with is a camera. Our accommodations were top cabin—the cab of his pick-up. I wrote, did needlework and took photos while he and his ATV went in search of game. The road up to the restroom I used warned of the danger of bears. I did not go there by myself at night.

Zina Abbott is the pen name used by Robyn Echols for her historical novels. Her novel, Family Secrets, was published by Fire Star Press. Her novelette, A Christmas Promise, and the five novellas in the Eastern Sierra Brides 1884 series, Big Meadows Valentine, A Resurrected Heart, Her Independent Spirit, Haunted by Love  and Bridgeport Holiday Brides ]now on preorder] were published by Prairie Rose Publications.