Just before the turn of the 20th century, the “ladies of the night,” or “soiled doves,” ran booming businesses in old Arizona boom towns such as Jerome, Morenci, Tombstone and Bisbee.


There was a limitless market–selling intimacy to lonely love starved men. These colorful lades bore a litany of picturesque nicknames such as Squirrel-Tooth Alice, Crazy Horse Lil, Frenchy Moustache, Lizette the Flying Nymph, and last but not least, Little Gertie, the Gold Dollar. These aliases weren’t just to camouflage identity but usually referred to some unique characteristic the lady possessed. As long as the town prospered, they stayed, but when the mines played out they were among the first to sense the economic crisis and move on.

Reasons for entering the profession were as varied as the women themselves. Some came from respectable families, while others were escaping from malevolent husbands. Some became prostitutes as a lark or some sense of adventure, while others were forced into it. A few lucky ones married some respectable gent and left the profession. Others went into business for themselves–some even became quite wealthy. Most, however, fell victim to the hazards of the trade, becoming strung out on drugs, booze, or died and were buried in lonely, unmarked graves.

Those notorious shady ladies sold companionship in a variety of settings ranging from ramshackle cribs to opulent mansions. In saloons and burlesque theaters, they were required to mingle with the customers and hustle drinks when they weren’t performing.

On such place was Tombstone’s Bird Cage Theater, located on the south side of Allen Street.

The evening’s entertainment began with a variety of burlesque shows titillating the audiences with risque vaudeville acts. Private booths with drawn curtains in the balcony were reserved for the big spenders. A stairway backstage leading up to the balcony allowed the girls the opportunity to earn an extra few dollars for a few intimate moments behind closed drapes. 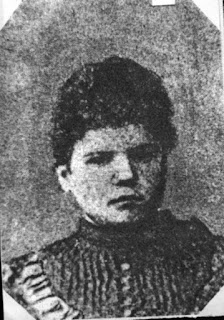 Not too much is known about Little Gertie. But her one night of jealous rage is infamous in Tombstone lore and will forever link her to Tombstone and the Birdcage Theater.


Little Gertie who was also known as “Gold Dollar” had a boyfriend who she had been seeing for some time and he was a gambler named Billy Milgreen. A “Soiled Dove” who worked at the Birdcage Theater named Margarita was very flirtatious and attracted to Milgreen. Gold Dollar had caught wind of this from another “Soiled Dove” that worked at the Birdcage and confronted Margarita.  She warned Margarita to stay away from her man or she would cut her heart out. She had also told Milgreen that she wanted him to stay away from her as well. One night Milgreen went to the Birdcage Theater to play cards, Margarita saw Milgreen and started to flirt with him. The person who was keeping tabs on Margarita for Gold Dollar ran to the Crystal Palace where she worked to informed her of what was going on. Gold Dollar stormed over to the Birdcage to see for herself. She hid out of site and peaked through a door. She saw Margarita with her hand on him whispering in his ear. Gold Dollar could see the Milgreen was trying to focus on his card game when Margarita plopped herself on his lap and starting kissing him. Gold Dollar busted through the door and screamed, “Get away from my man, you Mexican chippy! I warned you before!”

Gold Dollar pulled Margarita off Milgreen’s lap by the hair the two started fighting. Pulling hair and scratching. All of a sudden Gold Dollar pulled a double edged stiletto knife from her garter and stabbed Margarita in her chest. Margarita fall on top of a table as someone screamed to get the Doctor but Margarita received a fatal wound and she had fallen to the ground bleeding.

Once Gold Dollar heard the sheriff was on his way, she ran out the back of the Birdcage Theater and hid the knife. The murder weapon was not found so charges were never made against Gold Dollar. She left town shortly after. Milgreen also left town but there is no proof of them meeting up or even leaving together.


Good morning all!  My new book, Chase's Story, will be out in January of 2017.  It takes place in Arizona, so I'm excited to blog about Old Arizona.Tombstone is a wonderful place to visit, chuck full of history, wonderful shops, restaurants, bars and things to do!

I write historical western romances under P. A. Estelle.  Stop by any time to find out more about my stories or myself!