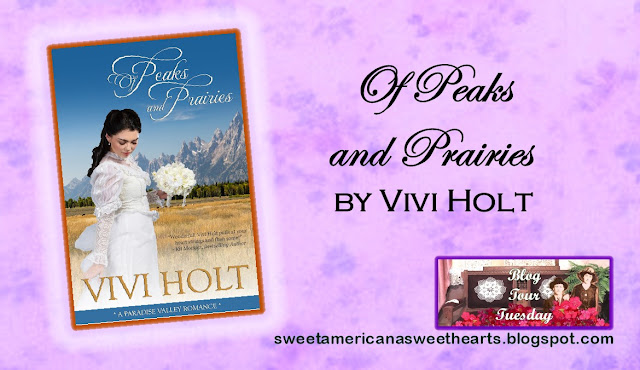 
Excerpt:
Of Peaks and Prairies
Chapter One 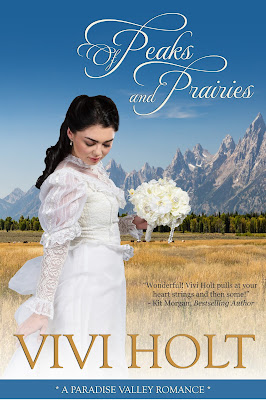 Genevieve Waters-Ewing walked from the church with her hand resting lightly on Quincey Ewing’s raised arm. He’d shaved for the first time in months, and she glanced with distaste at a scratch on his cheek where the blade had nicked his weathered skin. Her whole body trembled, and she fought hard to push down the sobs that threatened to escape her aching throat at any moment. He turned to face her with a grin, his ten gallon hat perched unevenly on his square head.
The minister who’d married them was so old and frail, and his hearing so bad, each time she shook her head and shouted ‘no’ during their vows, he simply nodded with a toothless grin and continued on with the ceremony. If she tried to run, Quincey held her close and pinched her arm. In the end she stood her ground, confident that the law would never uphold such a marriage — until, that is, her new husband forged her signature on the certificate of marriage. Now she wasn’t so sure.
She glared at him as her stepfather came up alongside her.
“Congratulations Genny, you’re a married woman now. Isn’t that what you’ve always wanted?” He chuckled, she caught him winking behind her back at his childhood friend - the man who’d just been pronounced her husband.
“Well, at least it’ll get you out from under my feet,” he continued. “I can’t be payin’ for yer upkeep forever. Your Ma done died on me, leavin’ me with a rug-rat I never wanted, and now it’s time for you to find yer own place in life. Can’t say as I’ll miss ya much, ‘part from the cookin’ an sech of course, but I’ll find a missus to do that soon enough, with you out of the house. ‘Course, you’re not goin’ far — just across the way. I’m sure you could find it in yer heart to help me out a time or two.”
They’d stepped out into the bright Texas morning, and Genevieve squinted her eyes against the sunlight that streamed down through a faint fuzz of thin clouds above. She cast her gaze about - they were on the outskirts of Fort Worth, Texas, and she could see the plains stretched out before them. The town pushed toward the openness, threatening to civilize its bluffs, rises and hollows. Chaparral tufts littered the landscape, sheltering hare and various rodents, and giving the plains an unkempt look. She smoothed the skirts of her burgundy plaid dress. It was the nicest dress she owned, even so it was well worn, and pulled tightly across her chest and hips where she’d grown in recent years. A long line of small buttons ran up the front of the bodice. The sleeves no longer reached her wrists even when she tugged at them, and her stays pinched her tiny waist. She sighed.

“If Ma knew what you had planned for me, Fred, she’d roll over in her grave.” Genevieve caught a sob, and pushed it back down with a grimace. 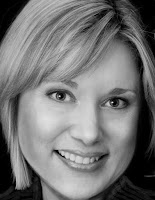 "The plot kept me enthralled and the pages turning"
"I cried and laughed"
"What an awesome ending. Can't wait for more!!"

Vivi lives in beautiful Brisbane, Australia with her husband and three young children. Growing up on a farm she learned to love the country life and now she writes about it in her books. History has always fascinated her as well, so writing historical romance seemed a natural progression. She loves horse-riding, hiking, and reading.

Her goal is to write touching, emotional and sweet romance stories that captivate the reader and transport them back in time.

Buy Of Peaks and Prairies

1.      Tell us about your heroine.  Give us one of her strengths and one of her weaknesses.

The heroine in my latest release, Of Peaks and Prairies, is Genevieve Waters. She’s had a difficult life, and hasn’t had much love. So, she finds it hard to trust anyone, and also finds intimacy a little confronting and uncomfortable. The story takes her on a journey from that place of brokenness and loneliness, to a place where she is able to finally embrace intimacy and friendship, in an open and honest way. It’s very satisfying.

I do actually write under a pen name. The reason is that I write children’s books under my real name, Bron Whitley, and didn’t want to confuse readers. I’ve also tried out a couple of other genres, so I wanted to be able to do that without diluting my brand. It’s funny because I chose the name Vivi Holt simply because it is a short name that fits well on a book cover, and it didn’t seem as though anyone else was writing under the name. I had no idea my books would be so well received. It’s been an amazing journey so far, and I’m looking forward to seeing where it goes.

Of Peaks and Prairies is the first book in a new series, Paradise Valley. It’s going to be a series of sweet, historical romances. The setting will be Paradise Ranch, in Paradise Valley, Montana Territory. This book follows a young woman, Genevieve, and her journey to wholeness after a childhood of brokenness. She leaves Fort Worth Texas, running from her troubled past, and hitch-hikes on a cattle drive, north to Montana. The story is full of drama, romance and suspense. It also follows the journey of Sarah Songan and Bill Hanover from the second Cutter’s Creek book – after their wedding. So that’s been fun as well. To find out when the next book comes out, sign up for my new release newsletter. Here’s the link for the newsletter sign up.

4.    What inspired your latest book?

Of Peaks and Prairies is actually inspired by a true story – that of Nelson Story. He was a man who lived at that time and was the first to take a large number of longhorn cattle from Fort Worth, Texas up to Montana Territory after striking gold. So, the hero in my book, Tom, is based on him, and a lot of the drama and adventures they go through are quite similar to what Nelson faced. Of course, my book is fictional, so it’s not entirely historically accurate, but there is some factual basis to the story.
Posted by Zina Abbott Author at 1:00 AM