For my latest story, An Unlikely Marriage, I researched the phenomenon known as Buffalo Bill. My heroine, with experience as a vaudevillian, has aspirations of being a part of the production known as “America’s National Entertainment.” The performance went by several names because the shows in the 1870s started out as reenactments for Eastern audiences of what William F. Cody had done in real life on the Western frontier.


William F. Cody had a varied career involving jobs as a civilian Army scout, a Pony Express rider (in actuality, he worked as a messenger for the company that operated the Pony Express), a guide through unmapped territory, and he participated in military skirmishes during the Civil War. After the war, he served as a buffalo hunter for both the Army and the Kansas Pacific Railroad. In 1871, as a gesture to cement US-Russian relations, Grand Duke Alexis, 21-year-old son of Russian Czar, was escorted on a good hunting experience. The five-day excursion included two companies of infantry and two of cavalry and a regiment band. George Armstrong Custer was brought from his assignment in Kentucky, and Cody was released from his Fifth Cavalry duties in Arizona. General Sheridan wanted Indians brought along to demonstrate their dances and songs. Brulé Sioux Spotted Tail, along with 100 of his men, participated.


His real life accomplishments were recounted in newspapers to such an extent that a dime novelist, Ned Buntline (pen name for Edward Zane Carroll Judson), made “Buffalo Bill” the hero of several stories. Then Judson convinced Cody to play himself in stage productions (one was named “The Scouts of the Prairie”) and recreate some of his frontier deeds. Cody would work out West in the fair weather and perform on Eastern stages in the winter months. 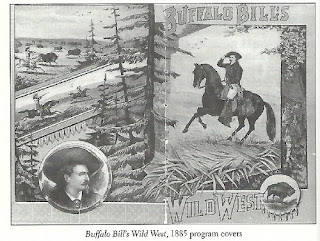 Cody excelled in plains showmanship—horse races, buffalo shooting contests, hunting excursions. So he decided he would take control of his own persona, and he staged his first Wild West exhibition in Omaha, Nebraska in 1883. Each year the production was refined—he hired writers to create scripts, artists to paint scenery, and directors to schedule the acts. The company traveled with a wooden set of a painted mountain range. When Cody realized the audience was mostly to males, he wooed sharpshooter Annie Oakley to join in 1885 to make the production more appealing to women. The entire summer of 1886 was spent performing at Erastina Amusement Grounds on Staten Island. Also this is the first year a winter season was contracted, and Cody rented Madison Square Garden so performances happened under a roof. Murals 40’x1500’ were painted to represent prairies, mountains, forest as backdrops to the performances. The orchestra were all dressed as cowboys—provided dramatic background to acts and played other music to bridge between acts. 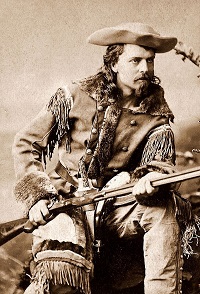 Cody went on to perform in Europe and then returned to America where his productions ran until 1916. Through it all, his costume remained rough like a frontiersman. His outfit was long buckskin coat with fur collar and cuffs, a line of fur ran above a strip of embroidered design above a fringed hem, fringe hung from the cap of the shoulder and along the back of each arm from shoulder to wrist. Boots were at the knee or, in later years, three inches above the knee. Later coats were mid-thigh with no fur, epaulets on the shoulders, fringe on cap of armhole, and gloves with leather gauntlet cuffs.


Even though Cody through his persona of Buffalo Bill proved himself a master showman, he never allowed ‘show’ to be part of any print advertising. To him, the performances were a retelling of his life.