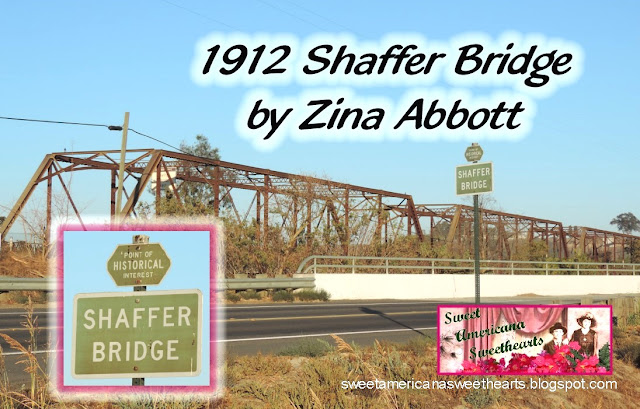 The Shaffer Bridge in Merced County is an example of some of the earlier bridges constructed for automobile traffic in California.

When I first saw this bridge, it was closed to motorized traffic. If someone traveling Oakdale Road heading north from Highway 59, it was necessary to detour south as far as meadow Drive, travel west for several miles, and then turn northwest on Santa Fe Drive. By that point, it was easier to travel to the town Hughson and cut off to go to Oakdale rather than snake back through the rural countryside east of Santa Fe Drive to once again connect with Oakdale Road.
In 2003, they did complete a new bridge over the Merced River, but they left the old bridge in place.
According to the California Department of Transportation Digital Collection  website, “The Shaffer Bridge (39C0013) is a steel, pin-connected Pratt through-truss bridge with three spans measuring 152 feet long each. The bridge is an early example of work completed by master bridge builder Judson Manufacturing Company; the company was later known as Judson Pacific Murphy.

The Judson Manufacturing Company was founded in 1882 with operations in Emeryville and Oakland California. It was comprised of bridge and structural steel shops, a machine shop, foundry and pattern shop and bolt and nut shops. 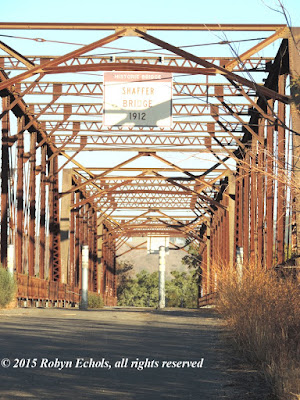 The Shaffer Bridge is the only metal truss bridge remaining in Merced County. It is currently used as a pedestrian bridge. The original timber decking has been replaced.”

The reason this bridge built in 1912 has been preserved is because it was determined to be eligible by the Keeper of the National Register in the Caltrans [California Department of Transportation( 1985 Historic Metal Truss Bridges in California Thematic Resources study. It is designated as a Point of Interest.
This bridge is in eastern Merced County and crosses the Merced River. The area is remote farmland, and sparsely populated. To better understand why this road from Oakdale to Highway 59, the road joining Merced to Snelling, it helps to know a little history of the area.

All of Merced County was once part of Mariposa County which was created in 1850 as one of California’s original counties. What is now a small rural county in the western foothills of the Sierra-Nevada mountains rose to prominence because of its location at the southern end of the Mother Lode gold mining during the California Gold Rush. As the largest county in the state, it was soon broken down into smaller counties, one of them being Merced County.

Merced County was formed in 1855. Its first county seat until 1872 was Snelling on the far eastern portion of the county. This community grew due to gold dredging in the Merced River between Merced Falls and Snelling as well as cattle and farming operations. It was only after two major railroads built lines through what is now Merced created a more convenient and cost-effective means to transport cattle and wheat that the population and economic center of the county shifted to that city. One of the highways connecting Snelling and Merced is the southern terminus for Oakdale Road, which connects Oakdale, another east San Joaquin Valley city in Stanislaus County to the north.
The automobile industry was still in its infancy in 1912, but there was a push for better roads as a means of transporting people and goods and services between communities which were originally developed in the eastern sections of the two counties. Oakdale Road paralleled the Oakdale-Montpelier Railroad (more in a future blog post) which transported passengers and freight until the 1940’s. So, although today, this one of only a handful of bridges that crosses the Merced River in Merced County, appears to have been constructed out on the middle of nowhere, at one time it connected some of the prominent communities in the region.

Zina Abbott is the pen name used by Robyn Echols for her historical novels. Her first three novellas in the Eastern Sierra Brides 1884 series, Big Meadows Valentine, A Resurrected Heart, and Her Independent Spirit were published by Prairie Rose Publications. Her novelette, He Is a Good Man, was published in the Lariats, Letters and Lace anthology.