In a story I’m working on that's set in 1878 Texas, I created the situation of a ten-month-old baby being orphaned in a stagecoach accident and a single woman taking responsibility for the child. For any of us who are mothers, we know babies don’t easily go from the breast to soft foods. A transition needs to occur, which sent me on a research trail to learn more about baby bottles.


Unfortunately, what I discovered varied from sad to tragic. Throughout the ages, a need has existed for an artificial way to feed a baby who has lost its natural mother. In instances following a mother’s death and the family lived among a populated area like a king’s castle or a shop within a town, often the recourse was a wet nurse—an already lactating mother who added the new infant into the nursing cycle. This solution would involve compensation of some type—either payment or the wet-nurse would move to the location of the family who had the need.


When that situation wasn’t possible, other solutions were developed. In ancient times, animal horns were used with a patch of leather tied to the tip with twine. Holes cut the tip allowed liquid to drip out. Alternately, a finger of a leather glove would be used. But most leather tanning methods used items we wouldn’t want in a baby’s mouth like urine or brain matter. A twist of fabric could be dipped in milk and the baby sucks it, but that would take a long time to transfer sufficient nutrition. In the 1700s, pewter bottles with metal tips were used but those caused many deaths from metal poisoning. In countries where the glassblowing craft was practiced, thin-necked bottles were created so a screw-on metal lid with a tip was attached. A sponge was laid over the tip to make for a softer place to suck. Still a problem because of the metal.

Ceramic or pottery bowls with spouts on one end were used to feed milk or thin cereal. The safety factor was reliant on the contents of the glazing used—and sadly many contained lead. 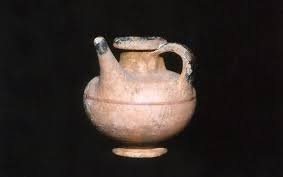 In 1845 when India rubber was used to make the first nipple, many thought the problem solved. But the rubber was stiff and had a horrible smell. Forty-five years would pass before the invention of vulcanized rubber and a nipple that withstood hot water washings. I did find an advertisement for Little Cherub Feeding Bottle which had a long rubber tube with a pacifier-like plug on the end. Unfortunately, a popular guide, The Book of Household Management by Isabella Beeton (1861), used by many women running Victorian households advised washing the tubing only every 2-3 weeks(do you believe that?). Sadly, bacterial infections cost many lives.

Lucky, too, was the existence of canned milk. Since 1857, condensed milk was commercially prepared and sold by Gail Borden Jr and Company. (Process was first perfected in France in 1820) The company sold big quantities to the Union Army during the Civil War, and wider consumer distribution was achieved by 1875.
Although I realize a spoon could be used to feed the milk, I wanted the baby in my story to retain the comfort of sucking. So I combined a couple of the above items to use a thin-necked bottle with a piece of sponge covered with a scrap of toweling inserted into the opening. The invention seemed like a plausible method that people with limited resources would have put together in a pinch. Especially when faced with a pressing need to feed that hungry and cranky infant.
~~~
Linda writes for several small presses, as well as indie publishes her historical novellas and novels. The book mentioned in this article is tentatively titled Mail-Order Haven will be released in early fall. To keep updated on her releases, consider joining her quarterly newsletter list. Or follow her Amazon author page or on Facebook.

Posted by Linda Carroll-Bradd at 2:00 AM