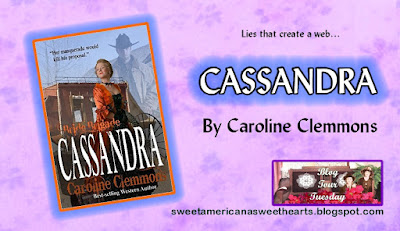 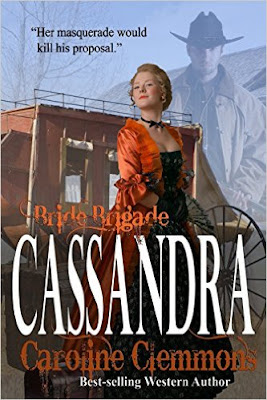 Cassandra Bradford has the cast off wardrobe to pose as a lady. Her goal is to marry a wealthy man who can provide her young brother with a sound future. Drat the luck! The first man she sees in Tarnation is a dusty cowboy who sends her heart pounding. Not for her. She has a better life in mind.

Samuel Drummond is one of the wealthiest ranchers in that part of the state, but he wants that kept quiet. His first wife married him for his money then left when she became bored with ranch life. He won’t let that happen if he remarries. He intends to find a woman who wants him no matter how poor she thinks he is.

When both Cassandra and Sam learn omissions the other has made, there are fireworks between them. They must work through their anger and hurt to achieve happiness.

Talking about her family had caused so much distress she hadn’t noticed the cabin until now. Somewhat horrified, she asked, “I-Is this where you live?”
If he noticed her disbelief, he gave no sign.  “This is a line cabin where we hole up when we’re trapped out on the range overnight in bad weather or working on this part of the ranch for several days in a row.”
He helped her down and gazed into her eyes as she slid down his body. She thought he held her close longer than necessary, but being near him was too wonderful for her to complain. Even through their clothes, his warmth heated her. When he broke contact, she wanted to throw herself into his arms and hold on forever.
No, no, no! What was she thinking?
After gaining control of her emotions, she asked, “So no one actually lives here?”
“The cowboys sleep in a bunkhouse at the ranch unless they’re married. I guess I could live here if I were married and wanted to. I’ll show you inside.” He led her to the small building with a half shed attached.
Inside was dark until he opened the three windows’ shutters to admit light. A large stone fireplace took up most of one end with wood stacked neatly on the hearth. Nearby was a stove of sorts. Four chairs surrounded a small table on which a lantern stood. Thin ticking mattresses were rolled up on each of the four bunks.
Not much space remained around the small room’s austere furnishings. The floor was stone. Shelves at one end held a few canned goods as well as metal dishes and cutlery. Two pots and a Dutch oven were on the stove. A tall bench held a dishpan, bar of soap, and an empty bucket. She’d seen no creek so there must be a well nearby.
He laid a hand on a range. “We used to cook in the fireplace, but we found this old stove and brought it here. Cooler in summer.” He gestured around the room. “You can see we have everything we need.”
Not to her way of thinking. “What about sheets and pillows and blankets?”
He grinned at her. “We carry bedrolls behind our saddles. Cowboys don’t need sheets and pillows.”
She was incredulous. “You’ve been living like this for eleven years?”

You may purchase Cassandra on Amazon by CLICKING HERE.

Caroline Clemmons is an Amazon bestselling author of historical and contemporary western romances whose books have garnered numerous awards. A frequent speaker at conferences and seminars, she has taught workshops on characterization, point of view, and layering a novel. She is newsletter editor for her local Yellow Rose RWA chapter and a member of several online chapters. Her passion is writing and she spends ten to sixteen hours a day at the computer creating the next book.

Caroline and her husband live in the heart of Texas cowboy country with their menagerie of rescued pets. Prior to writing full time, her jobs included stay-at-home mom (her favorite), secretary, newspaper reporter and featured columnist, assistant to the managing editor of a psychology journal, bookkeeper for the local tax assessor and--for a short and fun time--an antique dealer with her youngest daughter.

Posted by Zina Abbott Author at 7:14 AM