There are doll houses for children and then there are doll houses for adults.
Surprisingly (to me) it has only been in the last hundred and fifty years that doll houses were the realm of children's toys!
The earliest doll houses (or miniature homes) date back almost five thousand years to Egypt. Archeologists have found them, along with miniature furnishings and people and animals in the tombs of the Pyramids.
In 16th century Europe, only a few rich women in England, Germany and Holland could afford a dollhouse, which at the time was called a baby house. These were display cases that divided up inside into individual rooms rather than an actual miniature house. They were not for children’s playtime, but were for “show” for the adults. They housed intricately detailed furnishings, each created individually by master craftsmen. These baby houses, when complete cost almost as much as a full-sized house!
In the 18th century, smaller, more realistic doll houses began to appear in Europe, with Germany making the best and most collectible ones. By the 19th century, they were regularly exported to Britain and North America. The Industrial Revolution came along and toys went from being made by individual craftsmen to being mass-produced in factories. Once this happened, doll houses became more affordable for the middle class.
By the end of the 19th century the Bliss Company was making dollhouses here in America. Then early in the 20th century, dollhouse makers were Tootsietoy, Schoenhut, and the Wisconsin Toy Company. In 1917, The TynieToy company made authentic replicas of American houses and furniture. I imagine also, like in my own childhood, fathers handmade doll houses for their daughters.
Early doll-house furniture and dolls were not made to scale. Several different sizes could be found in one house. Nowadays collectors have three main scales (here in the U.S.)
By order of popularity they are ~
One Inch Scale which equates to 1inch = 1 foot.
Quarter Inch Scale which equates to 1/4 inch = 1 foot.
One Half Inch which equates to 1/2 inch = 1 foot.
In the United States there are many miniature shows held annually where dealers and clubs display and sell their miniatures. Internet forums and clubs and blogs also provide information. The women and men that work with miniatures go to great lengths to create scenes that are historically accurate with the furniture, rugs, wallpaper, pictures and clothing of the era--right down to the bowl of fruit on the dining room table.
That being said, there are also "fun" miniatures such as haunted houses, mermaids under the sea in Atlantis, and I've also seen a Hobbit house.
I have had the good fortune to help with a miniature show in my hometown and came away just wishing I had the time to craft a miniature version of a scene from each of the books I’ve written. I can envision the lighthouse and cliffs of The Gunslinger and the Heiress and the windswept meadows and a small ranch from Western Spring Weddings  not to mention the mercantile from Familiar Stranger in Clear Springs.
The trouble with that is…then I would be busy playing with miniatures instead of writing!

Here are a few pictures from my weekend of miniatures... (please forgive the picture quality! These are really tiny!)
Herta Forster grew up in Darmstadt Germany to a family of artists. In 1944
her parent's house was bombed by the Allies. After moving to the United States, she lovingly built a miniature replica of the home she left behind, complete with the furniture as she remembered it.

Since I write historical westerns, the last two pictures are of a western dance hall. This is One Inch Scale and so the detail is more pronounced. You could peek in from the open roof to see a large bar and a dance hall girl. Oh-la-la! 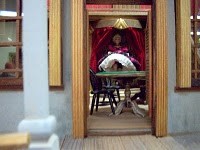 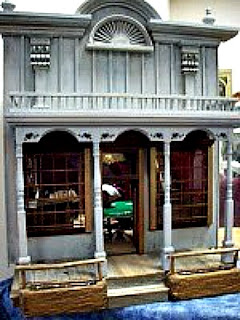 Kathryn Albright writes sweet western historicals for Harlequin Historicals.
Her newest release is His Springtime Bride in Western Spring Weddings Anthology.
You can visit Kathryn at her website:  www.kathrynalbright.com  to learn more about her books.
Posted by Kathryn Albright at 12:30 AM