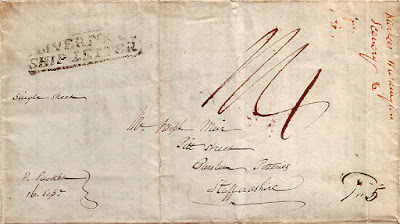 SO, we write historical romance. Our characters are in love, but what if they are an ocean apart?

< This is a Ship Letter from Liverpool. When the ship docked in the colonies, the the captain would post a notice of mail he had on board in a local newspaper and the recipients had to show up and pay for it.

Think of it, Sweet Charlotte pining away for William, who had sailed away to the New World to make his fortune, sends him a letter that he must come and save her from the evil Count Bascom as her father has died and she is being married to him to repay the family debt.
Handsome William is working hard when a friend tells him that his name is in the paper. William puts down his wheelwright tools, steps away from the fire, and pictures Charlotte and then Annie, who is the lovely maid he met at church. There is a letter. He scrapes together some coins to redeem the letter. Should he? He thinks of Annie's beautiful face.
Well, you get the idea. No instant text messages. Talk about long distance romance. I'll leave it up to you if William pays for the letter and sails back to England or not. 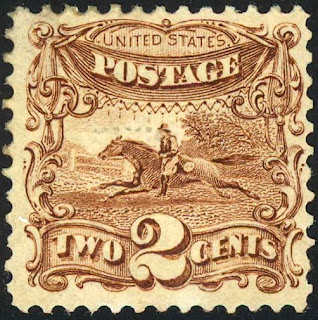 The postal system developed as a haphazard mix of private companies until after the Revolutionary War.  Of course, you have heard of Benjamin Franklin our first Postmaster General. There was a time that both sender and receiver paid for the postage. And it was determined by ounce and distance. Sending a letter wasn't cheap. In 1816, it cost 6 cents an ounce for 30 miles or less. And 25 cents an ounce for over 450 miles. Of course at the time our country was small.

Move forward and the first adhesive stamp was put out by the US Postal service in 1847 in 5 and 10 cent denominations.

In 1869, you could send a letter with a 2 cent stamp commemorating the Pony Express.


Just think, Randy went west to make his fortune.
Molly stayed at the home town and worked as a dressmaker. She dutifully sent Randy letters.
Dear Randy,
I hope you are doing well. Darling, I have the  money to go west. I have purchased tickets for the train to meet you in Denver, Colorado. I love you so. The moon and the sun pale in tears when I think of how long we have been apart. I am coming to you my love.

Randy shaves his long beard, washes his clothes, and tidies up the cabin he had built. On the ride to the depot, his thoughts turn to his love. Soon, he'll be with his Molly. 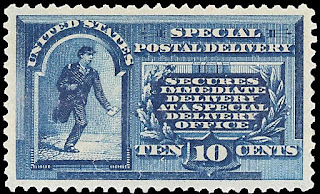 In 1885, the Special Delivery stamp was issued. If you were near one of the 555 offices you could get your letter delivered. As our mode of transportation changed so did the runner on the special delivery stamp going to  bicycle in 1902 - Think a bicycle built for two. ~~~~
In 1922 it was the motorcycle and in 1925 the truck.

So the next time you text your sweetie, think back to the troubles and cost our historical lovers had to go to in order to send their love letters.

OK, I have to get back to my writing.
I have stories demanding to be written.

I hope you enjoyed this little post down memory lane.
You can find me and my books on Amazon and on my page here on this blog: Patricia PacJac Carroll.
Also if you'd like news on my new books ~ sign up to my newsletter ~ PacJac News
My website is new - check and it out let me know what you think:  http://www.pacjaccarroll.com/