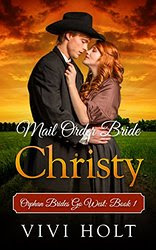 Christy finds herself orphaned and alone when her parents are tragically killed in a robbery gone wrong. Without a home to return to, she is stranded in a strange town where she discovers the kindness of a stranger and an opportunity for new love.

Brent has lost the love of his life and after years of loneliness he hopes to find a life-long companion through a Mail Order Bride service.

When the two strangers meet sparks fly, but misunderstandings threaten to tear them apart. Before Christy and Brent can have their fairy tale ending they will have to learn to trust each other and take a chance on love.

This book is a sweet, clean, western, historical, romance short story. It is a complete story, but it is also part of the Orphan Brides Go West series. Be sure to read them all - in any order!

Brent had spent the morning in a temper, snapping at Kip and yelling at the cattle. Spurring his horse forward, then jerking the bit to make it turn or stop. Kip watched him with a worried expression but didn’t say anything. Brent knew that Christy was to return on the train to Topeka the following day and he felt powerless to do anything about it. She was so beautiful that he became almost tongue-tied when he was around her. His heart beat rapidly and his face grew flushed and his words came out all wrong. It seemed everything he said upset her one way or the other and he was frustrated with how everything was turning out. He had been so happy to stand beside her at the courthouse and marry her, imagining how their life might be when they returned to the farmhouse. But the ride home had gone awry when a snake had caused the horse to rear, and everything had gone from bad to worse since then.
When Christy emerged from the house with a packed lunch for them, Brent had felt the trembling of his nerves begin the moment he saw her. They were sitting close together on a small blanket under the shade of a majestic tree when a breeze blew a strand of curls against her white neck. Brent could think of nothing else other than kissing her skin where the stray curl swayed. 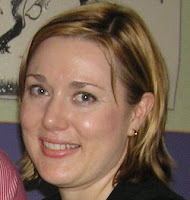 Vivi Holt lives in beautiful Brisbane, Australia. Growing up on a farm she learned to love the country life and now she writes about it in her books. History has always fascinated Vivi as well, and so writing historical romance was a natural progression. Vivi loves horse riding, hiking, and reading, and is a wife and mother to three young children.