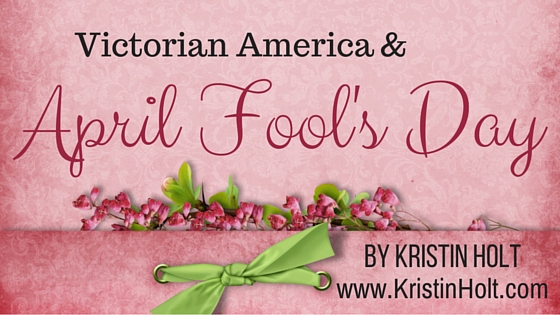 Let's take a moment and put one thing to rest-- frustrating apostrophes.

Where does the apostrophe in April Fool's Day (as spelled in both of the newspaper articles from 1892 and 1896, below) belong? Before or after the s?

Yes, current, modern 21st century dictionaries offer the same spelling but also include April Fools' Day--the plural possessive. Why? Because there most certainly are multiple fools in the world for which April Fools is their holiday... and because The AP Stylebook and The Chicago Manual of Style call for the use of the apostrophe after the s. [Source] 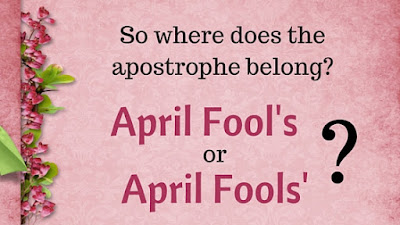 Let's get one more pesky little detail out of the way. Victorian-era American newspapers often spelled various words differently than we do today, used punctuation differently, and often did not capitalize words we do now. The abbreviation "sic" or [sic] stands for "spelled in context"-- okay, I admit it-- I made that up. It actually is a Latin adverb for "thus was it written" but that's too hard to remember. Essentially "spelled in context" means it appears precisely as it does in the original source (and hence my protection from pointing fingers and chuckles because readers think I can't spell).

April Fools' Day has long been a day for pranksters, troublemakers, and those simply looking for a bit of diversion. Tall tales evoke wide-eyed belief until the punch line, "April Fools!"

I'm forever fascinated by what our Victorian American ancestors saw as the standard for recognizing days like April 1st and celebrating various significant holidays throughout the year.

[You'll find easy links at the bottom of my article about Victorian Americans Celebrate Easter on my website, including: St. Patrick's Day, Independence Day, Thanksgiving, Christmas, New Year's... and... recognizing occasions such as Leap Year. Note: See the stick-figure magnifying glass in the menu--a search tool.]

ALL IN GOOD FUN


This newspaper article is clipped from The Kearney Daily Hub, of Kearney, Nebraska, dated 28 May, 1892.


In Honolulu, Hawaii, the 9 July, 1896 edition of Evening Bulletin reported quite an April Fool's hoax regarding discovery of a race of pygmies.

[Note: this transcription of a partial paragraph has everything spelled in context, including the era's choice of spelling pygmies thus--pigmies.]

"Once the BULLETIN, when under the ownership and editorship of its lamented founder, Walter Hill, perpetrated a grand April Fool's Day joke by publishing a minute account of the discovery of a race of pigmies living in a cave of one of the triplet mountains of Hawaii, employing a name assonant with that of Mr. Baker's as the name of the heroic discoverer." [sic] 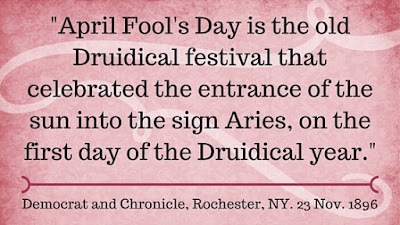 Despite the 1896 report (immediately above) that April Fool's is a Druidical remembrance, an 1833 article, directly below, argues April Fool's is the holiday of St. Francis--

The following article appeared in the Boston Post, in Boston, Massachusetts, on 1 April, 1833. Note the wry humor, the use of the familiar to poke fun at other country's traditions and celebrations-- which to Victorian Americans would appear highly scandalous (without pants?).

"Who invented April Fool's Day?-- It is the holiday of St. Francis, the founder of the order of Minims, and canonized by Leo X, for his....austerities! The more fool he!-- There was a religious society in Paris by the touching appellation of Fools, founded in 1198, which flourished 240 years, holding their Festival on the 1st of January, in which all sorts of absurdities and indecencies were committed. The French alone are able to throw any light on the subject; and that little is less brilliant than the corruscations** of a dead cod's head: They call mackerel, poisson d'Aeril; and um poisson d'Aeril, an April fool. They have a proverb of "Donner un poisson d'Aeril," to make one an April fool. They have so frequently been governed by "Fools," since they established the Salique Law, which excluded the fair sex from the throne, that they aught to be canonized with the honor of originating April fool's day. [sic]

"Shakespeare is silent on the subject, probably there was no "fool's day" in his day.-- And yet possibly the French  might have stolen this "day," as they did "Twelfth-day," or Epiphany, from the English during the Revolution of 1792, calling it "la fete des sans culottes," a festival without breeches! Horace Smith, in his Fooleries and Festivals, leaves the paternity of the "day" in as much obscurity as that of Romulus and Remus, but is inclined to swear it upon the Hindoos! because they hold the festival of their Huli fooleries the day before! With all due deference to Horace, if the Hindoos are not more ancient than the Israelites, we suspect Esau was the first "April Fool" when he sold his birthright, unless his father was fooled first, when he heard the voice of Jacob, and mistook a goat's skin for the hand of Esau; and like a goat with more beard than brains, bestowing his blessing upon the head of a hypocrite.*" [sic]

* However the second son is always the smartest; from Jacob down to "Brother Jonathan;"--Don't he beat John Bull? [appears as is in the original]
** [added because I couldn't stand not to] definition of corruscations-- or at least the most similarly spelled modern word: coruscation: A sudden gleam or flash of light; a striking display of brilliance or wit.

Did you notice the humorous article, immediately above, was published in 1833? That's
early. Technically five years before the Victorian Era began (Queen Victoria's coronation).

1833 predates the Victorian Era (as just said in a few more words)... but... as far as my newspapers.com access currently offers (though not every single newspaper from the history of the United States), 17 years earlier, in 1816, the earliest documented (per my current access-- who knows? this will likely change) use of "April fools day" appeared in The Maryland Gazette, Annapolis, Maryland, 11 July, 1816.

Nothing more than a fun bit of trivia, given we know the French used the phrase/term before the Revolution of 1792.

APRIL FOOL'S IS AN ANNOYANCE

As are Christmas Gifts one isn't amused with.

Ultimately, no matter that 115 years have passed since the conclusion of the Victorian Era, some things remain the same. No matter the quantity of vintage newspaper articles I perused, it seems April Fool's Day in the Victorian-Era United States was tolerated much the same as it is currently. Kids have fun with it. Adults cringe. Any news (especially the sensational or the happy) is viewed with distrust. Just yesterday, I heard the story of a brand-new father who called the extended family members to announce the birth of their son (everyone knew the wife was about to deliver...) and no one believed him the child was actually born. Unfortunately the birth was 28 years ago when cell phones and digital images were futuristic flights of fancy. 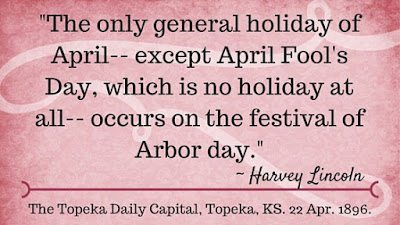 What is the most spectacular, or amusing, or embarrassing, or fantastic tale / prank / trick you've heard or seen in conjunction with April Fool's Day?

Hi! I'm Kristin Holt.
I write frequent articles (or view recent posts easily on my Home Page, scroll down to mid to lower) about the nineteenth century American west–every subject of possible interest to readers, amateur historians, authors…as all of these tidbits surfaced while researching for my books. I also blog monthly at Sweet Americana Sweethearts (first Friday of each month) and Romancing the Genres (third Tuesday of each Month).


I love to hear from readers! Please drop me a note. Or find me on Facebook. 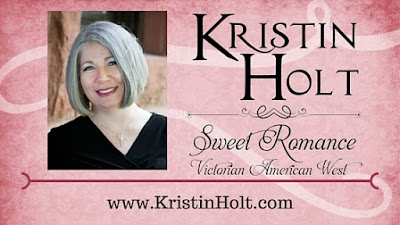