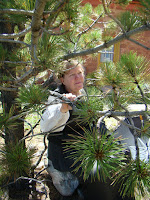 Over four years ago I was doing further research on a murder trial that took place in Colorado Springs in 1879. I had spent about twenty years working with juveniles who were in trouble with the law, so this line of research was not out of the ordinary. Then everything took an unexpected turn. I came across the obituary of a woman doctor who was practicing in Colorado Springs. I would say Julia E. Loomis changed my life, or at least added another direction.

It seemed very few had even heard of her. I set about trying to find all I could about this woman. The librarians pointed me in the direction of a book by Mary DeMund, “Colorado Women Physicians”, but she wasn't included. Although the DeMund book has been a great help in finding other women physicians in Colorado prior to 1900, it doesn't have them all. So how did I find the story of Julia? She was born in 1816 in New Woodstock, New York. That information was located on her headstone here in the local cemetery. She is also the only early woman doctor who has an MD after her name. She went to the Cleveland Womens Medical School in her fifties. The whole family moved a great deal, but determination did win out. She arrived in Colorado Springs between 1876-78. Unfortunately she passed away in early 1880, just a year before Colorado started licensing physicians.

You might think she was one of the first. While she was early, most people believe Alida Avery, who had been the physician at Vassar, was the first woman medical school graduate in Colorado. She arrived in 1874. I found reference to another women prior to 1874 in the Denver newspaper of 1873. Her name was Eliza Gillette. The California licensing board, which a lot of physicians used, has her graduating from a medical school in Ohio. Her California license number was 5. By 1877-8 she was in Montana then Washington state. So far that is all I've found of this lady.

It seems to my mission to find and record as much of the lives of these women as I can. I write of them on blogs, speak to classes and groups about them, and will eventually publish my findings in magazines and books. There may even be a few biographies, for these women deserve it.

On March 19, I will be in the mining town of Victor Colorado, part of the Cripple Creek mining district, speaking about these women, including those women who practiced in the area. Cripple Cree/Victor was the last major gold strike in the lower forty-eight. Gold was found in 1891 and the explosions of people began. Even Dr. Susan 'Doc Susie' Anderson tried to start a practice there, since her father and brother lived in the area.

Telling their stories is a passion that has not abated, and I hope it doesn't anytime soon. In the meantime, I'll keep searching, writing. But don't fear, I have plenty of fiction stories that Angela Raines will be sharing over the course of the next few months. Until next time. Happy reading and writing.

Angela Raines is the pen name for Doris McCraw. Doris also writes haiku posted five days a week at - http://fivesevenfivepage.blogspot.com and has now passed one thousand haiku and photos posted on this blog. Check out her other work or like her Amazon author page:  http://amzn.to/1I0YoeL

Posted by Angela Raines-Author at 6:00 AM