The May Lundy Mine

I am excited about the upcoming release of my latest novella in the Eastern Sierra Brides 1884 series, due out the end of March. The title is Her Independent Heart. Although not about Independence Day specifically, it is mentioned on the storyline. Mostly, it is about two women who each seek their own brand of independence. 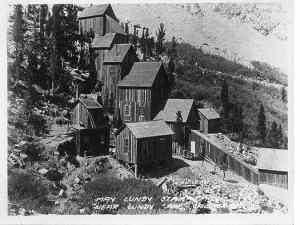 A key event in the book is based on an actual incident involving the May Lundy mine, the biggest producing mine in the Homer Mining District, that happened in Lundy, California on August 21, 1884. So, today I decided to share a little history of the May Lundy mine.

The May Lundy became part of the Homer Mining District in October 1879. William O. Lundy had been operating a sawmill in Lake Canyon near Lundy Lake in 1878. The sawmill was a major timber producer for the nearby town of Bodie, California.

Reports filtered back to that town of various miners roaming the Eastern Sierras in 1879 discovering gold. One of the most important strikes was made on the south wall of Mill Creek Canyon by C.H. Nye (a relation of Nevada’s Senator Nye) and L.L. Homer. Homer didn’t stay in the area long, but his name was used to establish the Homer Mill and Mining District in October 1879. O. J. Lundy’s son William was chosen as the first recorder of the Homer Mining District in 1879. Founders Nye, Homer and Wasson quickly sold their interests to San Francisco investors who then provided the capital to start mining operations. 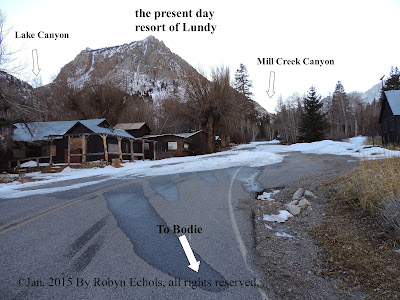 The May Lundy Gold Mine was formed at this time. Just as O.J. Lundy who moved to the area named the saw mill after his son William Lundy, he named the mine after his daughter May Lundy.

By the Spring on 1880, the word was out about the gold strike. The Bodie Chronicle warned miners it was too early to head up Mill Creek Canyon because of the heavy snows and lack of accommodations. People went anyway, merchants as well as miners.

Enthused about the potential for great wealth coming from the May Lundy mine alone, in 1880, in addition to the growing town of Lundy located on the western shore of Lundy Lake, the May Lundy Company in San Francisco ordered construction of a mill on Mill Creek at Lundy. It also erected buildings at the mine site so miners could work during the winter. They built a boarding house, a lodging house, a blacksmith shop and a storehouse. Next to the mill they built a store, largely for their own convenience, but also open to the public.

Many of the miners often left during the winter since the deep snows of region did force the mines to shut down for several months. In the winter of 1883-84, the heavy snow lingered on later on than usual, forcing a later start. By June of 1884, the May Lundy mine employed over 100 men. The ore continued to be of good quality and operations were running smoothly, with regular weekly shipments of bullion being made.

What happened next led to the closure of the May Lundy mine and the rapid decline of the town of Lundy. The mine, owned by San Francisco investors, was advertised for sale in 1883. The local newspaper, the Homer Index, on November 3, 1883 announced that the May Lundy Company, Limited, formed by a number of wealthy English and Scotch gentlemen, was purchased and incorporated in London.

In 1884, with the business in limbo waiting for the sale to be finalized, those in charge of the May Lundy Mine and Mill stopped paying their workers in early July. The company businesses charged at the local stores. On August 21, 1884, the mine and mill were attached and closed down to satisfy a claim of over $12,000 by Rosenwald, Coblentz and Company, a local merchant in Lundy.
Other creditors in Lundy followed their lead. By the end of the day, claims totaling over $20,000 had been submitted.

Under Sheriff Wilcox closed down the mine at noon, and the mill at nine o’clock that night. He assigned men at both the mine and the mill to prevent further work until the debts were satisfied. The total indebtedness was estimated between $35,000 to $40,000, a tremendous sum of money at that time.

That is the incident you will find as part of the story in Her Independent Heart.

Other companies were formed in Lake Canyon in 1891 and 1900. Cyanide processing began about 1895 which allowed ore to be removed from old tailings. This prompted James Cain to build cyanide plants in both Bodie and Lundy.

The Crystal Lake Gold Mining Company bought the May Lundy in 1900. It expanded the mill to twenty stamps and built power houses at the mine and near Lundy. In spite of there still being sufficient gold, due to production costs, what was originally the May Lundy Mine never achieved the success it enjoyed prior to its closure in August, 1884. The company shut down in 1915.

In 1921, Thomas Hanna, son-in-law of naturalist John Muir, gained ownership of the May Lundy mine by paying back taxes. He made the purchase for speculation, but was unable to sell the mine before the 1929 stock market crash. In 1934 he obtained a Reconstruction Finance Corporation loan and rebuilt the mill. He added a two-story bunkhouse and a new power plant. He successfully treated old tailings, but due to the War Powers Act in 1941 passed in response to World War II which prohibited “non-essential activities,” the May Lundy mine close in 1941. Hanna’s loan was foreclosed in 1942.

High development costs discouraged future mining. The May Lundy along with other mines fell into ruins. The old gold mine is now a historic site, much like the nearby Bodie ghost town.

Zina Abbott is the pen name used by Robyn Echols for her historical novels. Her novel, Family Secrets, was published by Fire Star Press in October 2014 and her novelette, A Christmas Promise, was published by Prairie Rose Publications in November 2014. The first two novellas in the Eastern Sierra Brides 1884 series, Big Meadows Valentine and A Resurrected Heart, are now available. Her Independent Heart is scheduled for release the end of March 2016.

Posted by Zina Abbott Author at 3:54 AM

Email ThisBlogThis!Share to TwitterShare to FacebookShare to Pinterest
Labels: ghost town, Her Independent Spirit, Lundy, May Lundy mine, Zina Abbott